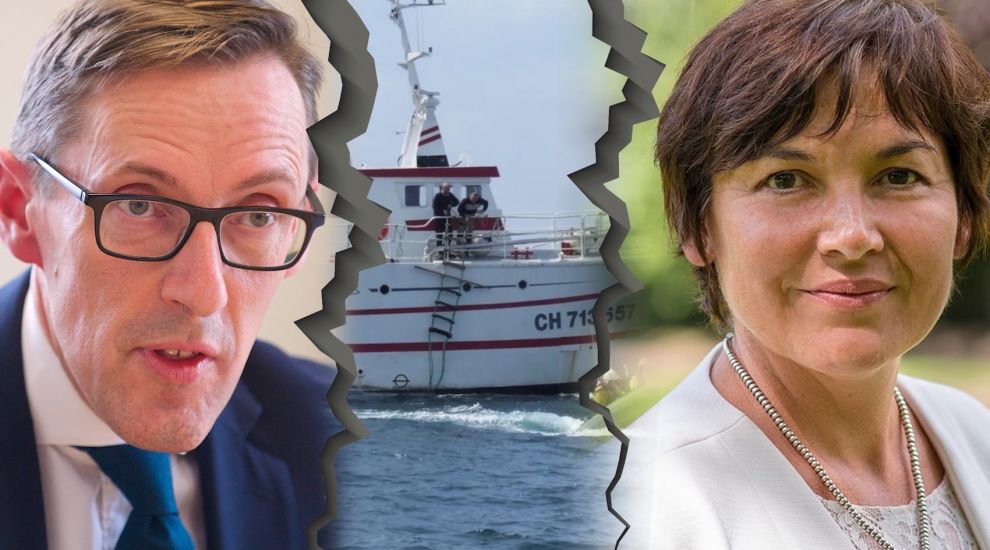 Jersey’s Government has defended the new controls on fishing in its waters despite fury from French mariners and politicians escalating into a diplomatic crisis – with the French Maritime Minister even threatening to cut Jersey’s power in retaliation.

The island has been accused of adding a number of "unfair" conditions to the permits issued to French vessels equipped with tracking technology of more than 12 metres on Friday - including restrictions on the number of days per year boats can fish in Jersey’s waters and the zones they can visit – without advance notice or discussion.

This morning, External Relations Minister Ian Gorst said the Government maintained that it had acted in line with “legal advice”, “in good faith” and “with due regard to non-discriminatory and scientific principles” in applying the conditions.

He said that he would carrying on the conversations with the UK and EU, and he will be speaking with the Regional President of Normandy later this morning, and it was likely that a further amnesty would be offered to smaller French fishing boats which had applied for a licence.

Senator Gorst claimed the skippers of these boats - all under 12m and fitted with tracking technology - appeared to have been confused about what information they had to provide to Jersey in order to get a licence.

"These 17 boats simply provided the evidence that they had fished for at least 10 days in the last three years and not details of their full fishing effort," he said. "We need to find a way to give them time to provide us with all the data. We are going to request to speak directly with the fishermen and probably offer an extension of the amnesty to them."

"There are issues around the limit of the number of lines on dredgers, but Jersey fishermen already have these restrictions on their licences. The EU has also asked questions about a bream nursery area that we have closed off to conduct research. That is simply to collect the scientific data that the trade deal demands."

He added that he hoped to “heal” the relationship with France soon, and was taking the complaints of the French fishermen “very seriously” and planned to “respond in full”.

Asked why the French appeared not to know about the licence conditions, Senator Gorst said: "You could say that because our lines of communication are Jersey-London-Brussels-Paris-Normandy means that it is not working as it should be, but the trade agreement is clear: to get a licence, fishermen must provide evidence of full effort over at least 10 days in the last three years."

The defence came after the Regions of Normandy and La Manche fired the first warning shot against Jersey on Monday night.

They said they would be closing their office in Jersey of more than 25 years to demonstrate their  “incomprehension and dissatisfaction” with the restrictions, which they claimed had not been raised in any of their “numerous discussions” with External Relations Minister Senator Ian Gorst.

Earlier on Monday, the Regional Fishing Committees of Normandy and Brittany had called for a ban on Jersey catch being landed in Granville – a measure supported by Granville’s Mayor – and urged French businesses to no longer buy Jersey goods. Some fishermen were also reportedly discussing a possible blockade.

Then yesterday afternoon, French Maritime Minister Annick Girardin told the French Parliament that she was “disgusted” to learn of the conditions attached to the new system, and said the country was “ready to use… retaliatory measures” afforded to it under the UK-EU Trade Deal.

This, she suggested, could include pulling the plug on the island’s electricity, which comes to the island from France via undersea cables. Jersey relies on France for around 95% of its supply. “I am sorry if it comes to this, but we will if we have to,” she said.

Jersey Electricity declined to comment on the threat when approached by Express.

The Deputy Chair of the European Research Group of Tory MPs, David Jones, described Ms Girardin’s threats in the Telegraph as “straightforward demanding money with menaces, which is not the way a 21st century democratic country behaves”.

“The simple fact is this is bullying in order to get the UK to back down on fishing,” he said.

Ms Girardin’s comments came in response to an urgent question in the Assemblée Nationale from La Manche politician Bertrand Sorre, who said he was aware of a Granville mariner who would now only be able to fish for scallops for 11 days a year, having previously fished for 40 a year.

He described the fishing community’s anger as “roaring”, adding that the desire “to enter battle is palpable.”

The changes in the fishing regime have come about as a direct result of Brexit, which put an end to the Bay of Granville agreement.

The previous agreement saw the management of Jersey’s waters between three and 12 miles shared between France and the island between 2004 and 31 December last year.

A new permit-based system was launched by Jersey on Saturday (1 May), with 41 vessels over 12m were issued a licence to fish a day in advance. Negotiations are ongoing in relation to obtaining permits for an additional 14 additional vessels. From 1 July, smaller French boats under 12m will also have to hold a licence.

A spokesperson for the UK Government’s DEFRA Department maintained this evening that “Jersey is responsible for its own territorial waters”, but noted that the UK was “constitutionally responsible for the international relations of the Crown Dependencies”. “As such, we have been working closely with the EU and the government of Jersey on fisheries access provisions following the end of the transition period for licensing,” they added.

The European Commission said it was involved in “intense joint work” with the UK Government to resolve the issue, and UK Brexit Minister Lord David Frost was expected to meet Clément Beune, France’s Secretary of State for European Affairs, this evening.

Government of Jersey officials are also understood to have held meetings with French officials today, although they did not confirm this in their statement. Ouest France reported that the Manche region’s Vice President, Jean-Marc Julienne, held crisis talks with Jersey’s Chief Minister this afternoon.

Senator Gorst said he hoped Jersey would be able to “heal the relationship [with France] as soon as possible”, adding that he hoped the Presidents of Normandy and La Manche regions would reverse their decisions to sever ties with the island.