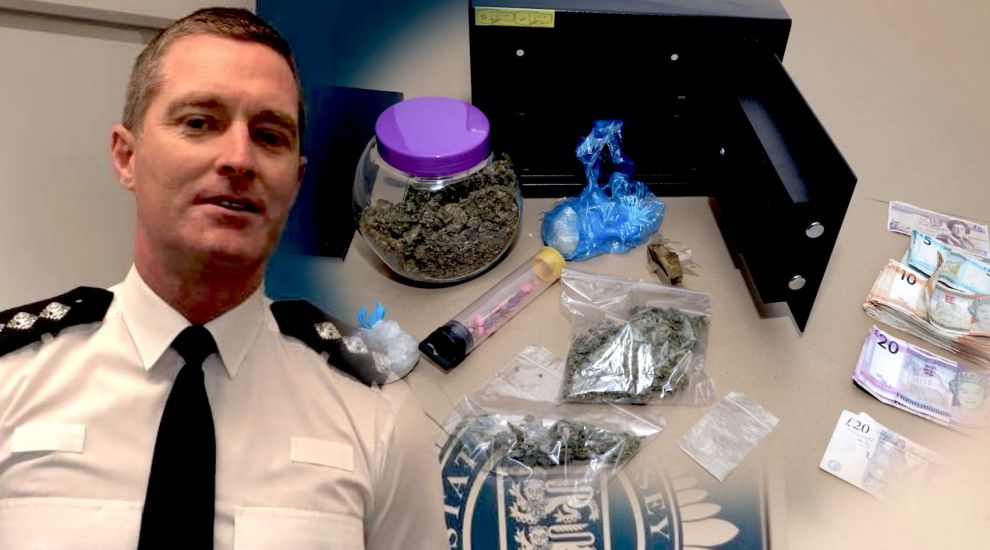 Police have netted more than a dozen suspects, £24,000 worth of drugs and £15,000 in cash in less than a week, following a clampdown on organised crime aimed at leaving dealers "paranoid" in the wake of a teen's death from suspected MDMA use.

Launching 'Operation Shark' today, Police said they have put together a "dedicated team of officers" to focus purely on drug enforcement in the coming weeks in a bid to curb the strain the illegal trade puts on families, the economy, health services, and the wider community.

The campaign has already seen them raid a number of properties under the Misuse of Drugs (Jersey) Law, seizing significant quantities of drugs and cash believed to be the proceeds of crime in the process.

An image released by Police today of one of their hauls (pictured top) showed piles of banknotes, jars of what appears to be cannabis, and a tube of pills resembling the super-strength 'Skype' pills that had led scores of islanders to be admitted to hospital last summer, among other suspected drugs - all of which had been hidden in a safe.

So far, 14 individuals aged between 17 and 43 have been arrested since Sunday, and 19-year-old Rorey Allo and 38-year-old Stephen Bates have both appeared in the Magistrate's Court.

Chief Inspector Hafey said the aim of the crackdown was to let drug dealers know they're not going to have an "easy life".

Pictured: Police want drug dealers to be "constantly looking over their shoulder".

The crackdown follows the hospital admissions death of 19-year-old James Le Bourgeois, who died in the early hours of Saturday after he was believed to have taken MDMA.

Tributes have been paid to the young man this week, with his work colleagues at 4hire remembering the apprentice mechanic as someone who "never stopped smiling".

Islanders are now being reminded of the dangers of taking MDMA in a new government campaign, warning: "They won't tell you the party could end in intensive care."

For those who do still decide to take the Class A drug - commonly known as ecstasy - advice (CLICK HERE) has been issued on how to do so safely.

Police are now urging islanders to get in touch if "something doesn't look right" and to save their non-emergency number - 01534 612612 - in their phones to report any suspicious behaviour.

"Your eyes and ears can be more far reaching than ours, so if you hear or see anything suspicious, please call us," Chief Inspector Hafey said.

Their message to drug dealers, meanwhile, is: "We will catch you, and you will pay dearly."