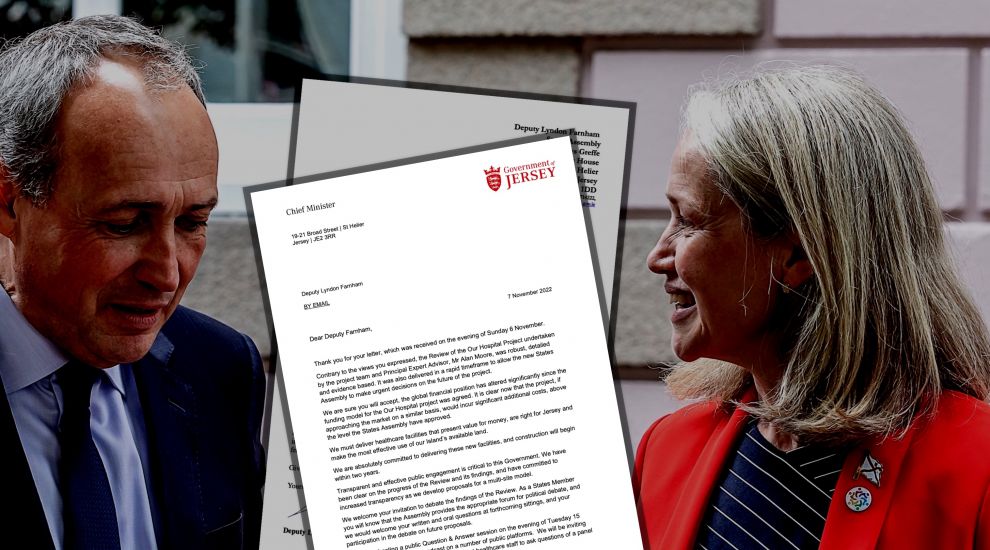 The Chief Minister has turned down a challenge to take part in a live debate about the hospital project from the politician previously in charge of it - telling him to save his questions for the States Assembly and another pre-planned public event.

Responding to a letter from Deputy Lyndon Farnham, Deputy Kristina Moore said Minsters would instead be taking part in a public question and answer session on 15 November which will be available for islanders to view "on a number of public platforms".

Deputy Farnham, who held political responsibility for the Our Hospital project under the previous government, had written to Deputy Moore suggesting that they broadcast a live debate between them using the government's studio in the Parade.

He issued the challenge following publication of a review of the plans, which recommended abandoning the proposed single-site hospital at Overdale in favour of a hybrid scheme that would also include the existing Gloucester Street site and adjacent land at Kensington Place.

Deputy Moore said that she "welcomed" Deputy Farnham's invitation – but added that the States Assembly provided the "appropriate forum" for political debate.
'We would welcome your written and oral questions at forthcoming sittings, and your participation in the debate on future proposals," she continued.

"We will be hosting a public question and answer session on the evening of Tuesday 15 November, which will be broadcast on a number of public platforms. We will be inviting members of the public, interested groups and healthcare staff to ask questions of a panel of ministers, chaired by an independent moderator."

She added that the session would be the "first of many opportunities" for public engagement on the subject.

"We must deliver healthcare facilities that present value for money, are right for Jersey and make the most effective use of our island's available land. We are absolutely committed to delivering these new facilities, and construction will begin within two years.

"Transparent and effective public engagement is critical to this government. We have been clear on the progress of the review and its findings, and have committed to increased transparency as we develop proposals for a multi-site model," she said. 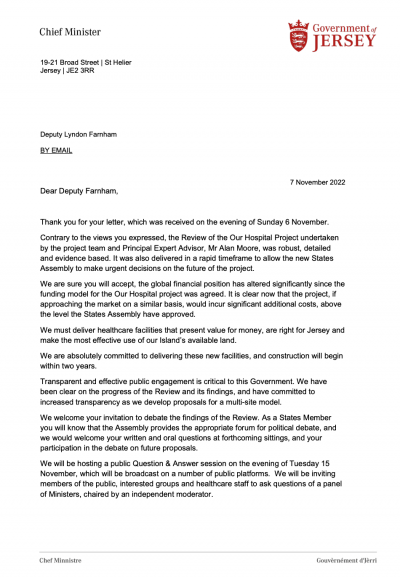