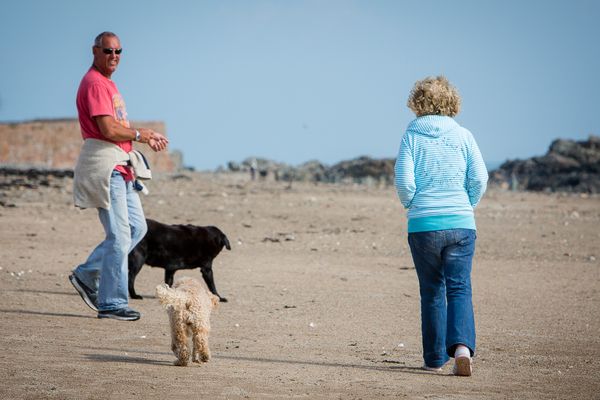 One parish Constable says that he doesn’t remember a single prosecution for people walking their dogs on the beach without a lead – but says that his officers do their best to enforce the rules.

St Clement Constable Len Norman said that the restrictions on having dogs on beaches – which came into effect on 1 May and which last until the end of September – were first adopted so that Jersey could feature in a Good Beach Guide, and admitted it was hard to enforce them.

He said: “The majority of the honorary police have got jobs so the amount of physical policing we are able to do is limited, but they do keep their eyes on situation as best they can. If someone wants to complain they can phone the Duty Centenier, who will attend if there is someone available.

“There are no hordes of tourists out there but there is certainly a lot of local people who use the beaches and not all of them like dogs jumping up at them. If I remember correctly the rules were introduced so that we could be in some Good Beach Guide publication, that was the reason that it was introduced.”

As of 1 May, dogs are not allowed on beaches without a lead between 10.30 am and 6 pm. The restrictions come to an end with the finish of the traditional summer tourist season on 30 September. There is also a £500 fine for not picking up dog mess.

The rules are policed by the 12 Parish Constables, and the same time limits also apply to horse owners, who are not allowed to exercise their horses on the beach between 10.30 am and 6 pm until the restrictions end.