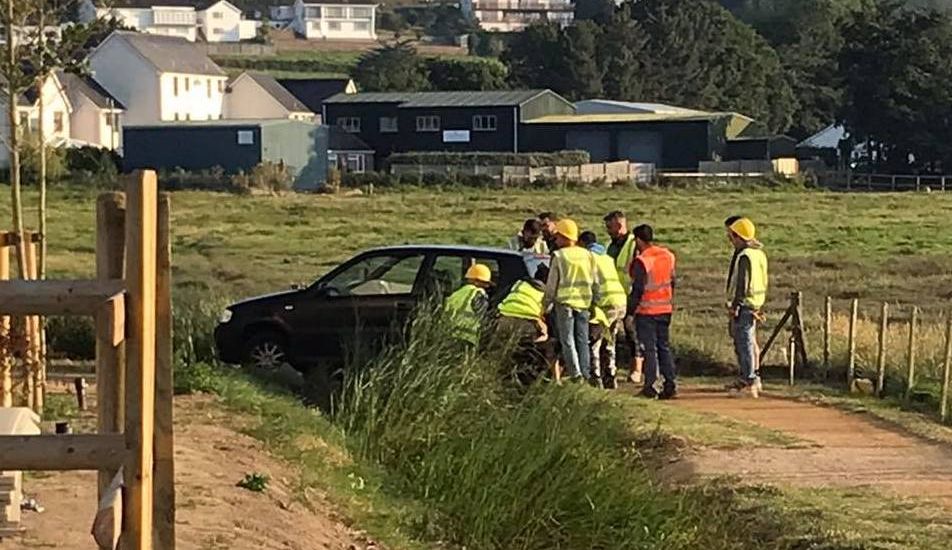 After following a diversion in the Beaumont area, the vehicle made a footpath faux pas, and became stuck.

With one wheel overhanging, the car was at risk of being pulled into the brook.

Fortunately, the sorry sight was spotted by those working on the nearby Dandara construction site – soon to be a development of 63 homes on the former Total Sport site – and around a dozen workmen dropped what they were doing to come to the driver’s rescue.

The driver was said to be shaken, but fortunately unharmed.

The construction team’s efforts won them praise on ‘Good or Bad Jersey Businesses’ from Claire Langford, who was walking her dogs in the area at the time.

“Well done to the Dandara team working at Beaumont this morning.

“Due to road closures some poor motorist had taken a wrong turn and got stuck. Loads of workmen came to their rescue….so nice to see,” she wrote in a post that received more than 200 likes. 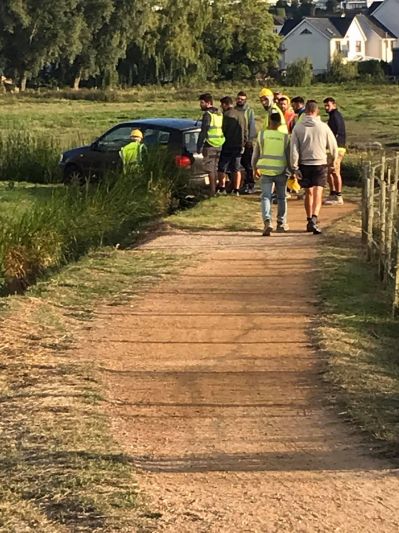 Pictured: The construction team came to the rescue when the car got stuck.

Some commenters joked about the “short cut”, with one saying, “I’ve always thought that footpath looks very much like a road!!!!”, while some were more sympathetic.

One islander pointed out that the diversion signage was “confusing”, while another and that the path could be mistaken for a dirt road going behind the buildings.

Other Facebookers joined the praise for the helpful crew, with one commenter saying: “I love this, well done guys, many would have left her.

“Bet you all had a laugh around break.”

Speaking to Express, Claire added that she was impressed by the team’s reaction to the sticky situation.

“The guys were all really lovely and laughing and joking - not in a horrible way - which was why I posted as I thought it was really sweet of them.”

A Dandara spokesperson said: “The Dandara team only did what anyone would do and were more than happy to help.

“We’re just glad they got out safely.”