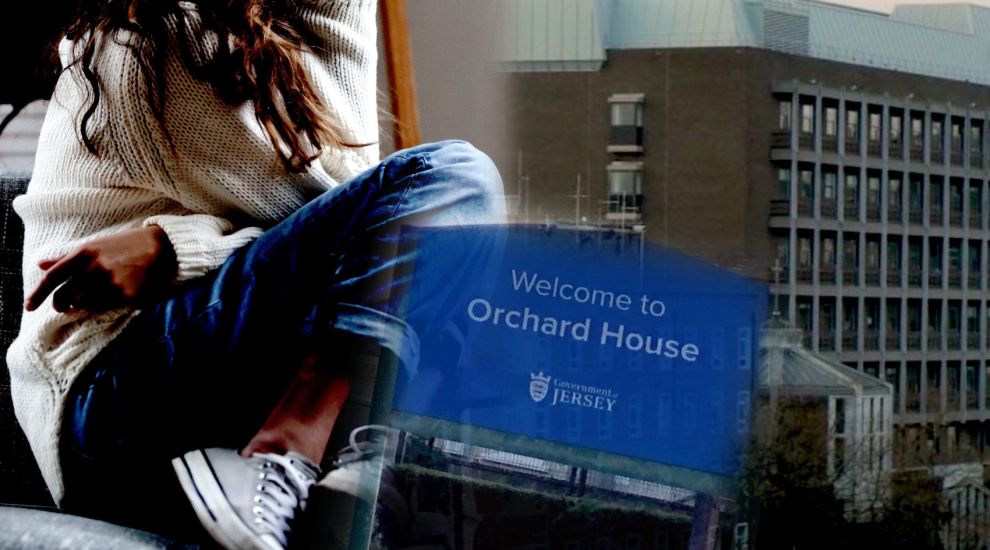 As part of a presentation on mental health in yesterday’s Youth Parliament, first-hand testimonies were given by those who had experienced the services, and calls made for the Government to listen and make changes.

The Youth Parliament is a group of young people assigned to discuss, research and bring forward issues for States Members to consider.

One female student opened up about her time on Robin Ward after she was admitted for mental health reasons, recalling how she often felt "dismissed by the nursing staff and the CAMHS team."

"I got put in a room with two other people - that affected my mental health really, really badly. I still am trying to get over some of my experiences there," she continued. 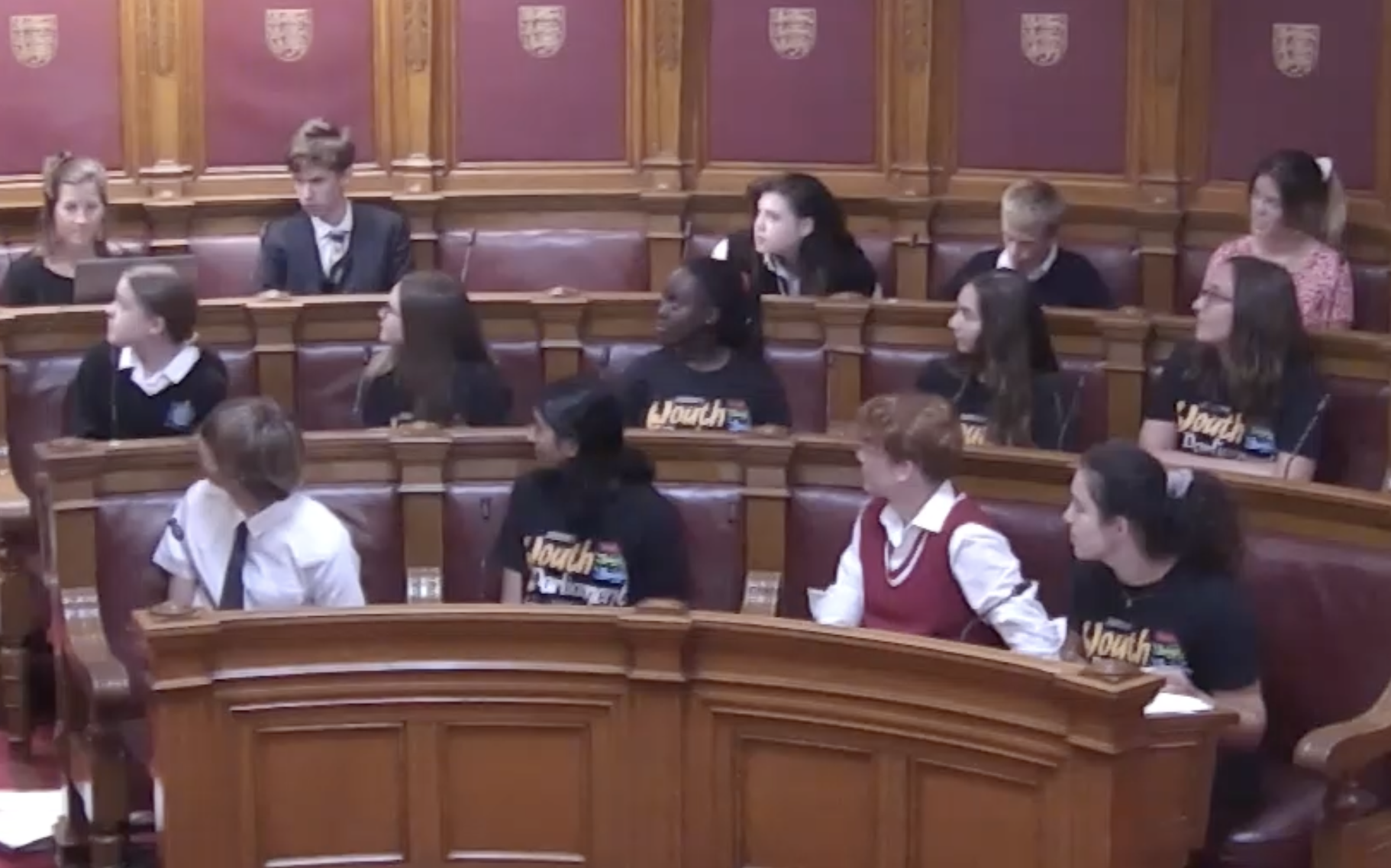 Pictured: Young people from across Jersey spoke to Ministers about various issues affecting them - from climate change to discrimination - in yesterday's Youth Parliament.

A young man then described his time trying to get help while in "crisis", and his subsequent stay in adult mental health facility Orchard House.

“My crisis started on the Friday night, so I went into hospital, someone called the police and took me over to A&E,” he explained.

“The mental health social worker then proceeded to still send me home knowing I was in a considerable amount of danger to myself.”

Reflecting on his time in Orchard House, to which he was admitted shortly after, he said that he was "better off" than the other residents because he was kept within eyesight at all times because of his age.

However, he added that “there were times where I was in danger and the people there didn’t really listen to me." 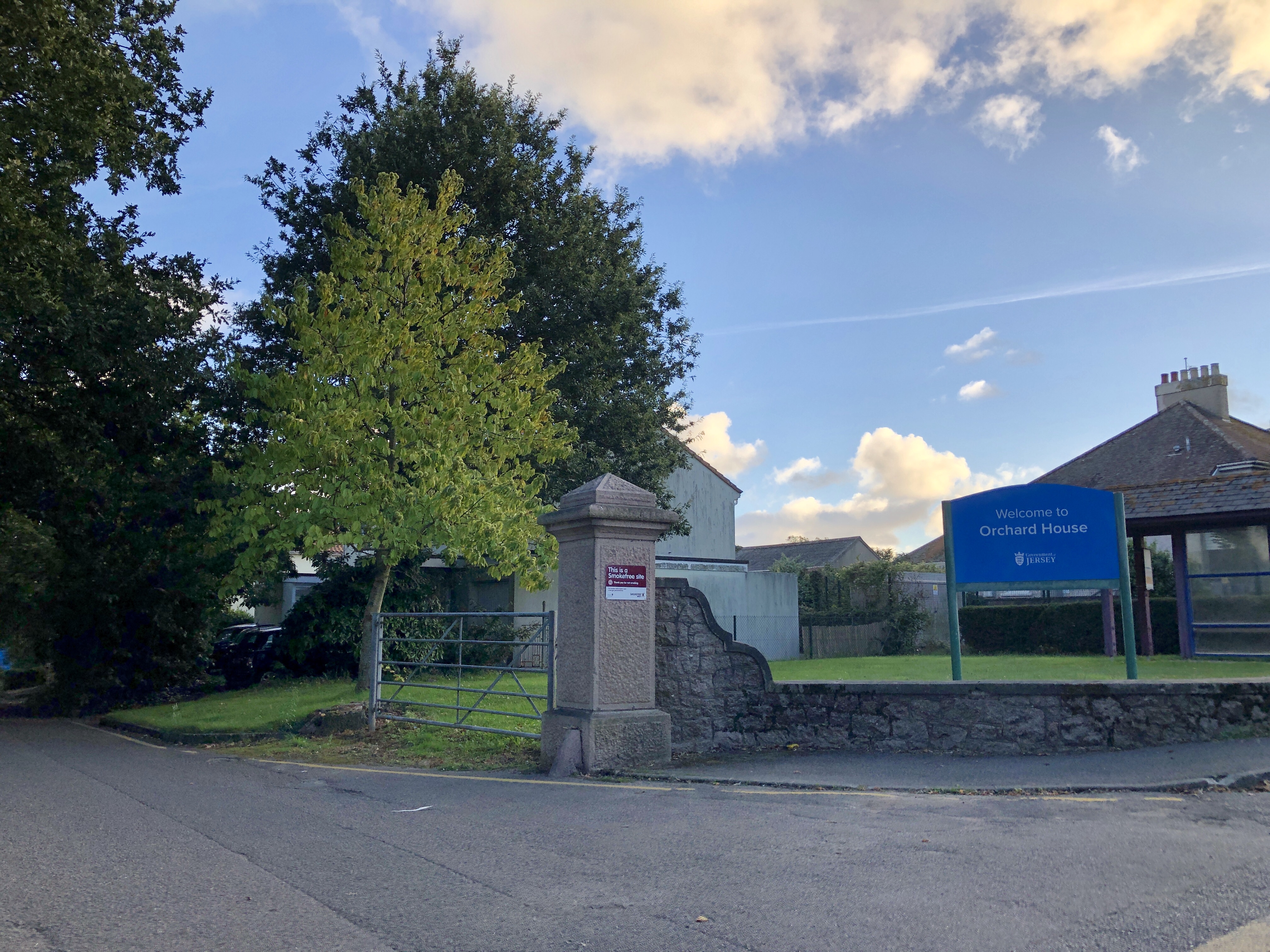 Pictured: Orchard House has recently had up to five young people staying there at one time.

“There was one night where there were a lot of things were just kicking off and I just needed to leave the situation, and I couldn’t go to my room, as I was getting moved to a different room, and it resulted in me getting sectioned because of the way I reacted, which I couldn't really help in the situation,” he recalled.

Overall, he said his experience "wasn't too bad, but it could have been a lot better", adding: “There were quite nice staff, the food was alright, I had somewhere to stay. For the most part I was there during covid as well so it was a little bit different, but for the most part I got to see my family when I needed to, and CAMHS also came quite a lot, they came every day.”

His key contention was that he had been lodged alongside adults, with very few under-25s present.

“Our main priority is we can’t have young people with adults," the young man argued. "It considerably affected my mood, and for the first couple of weeks I wouldn’t interact with anyone, and I just did not feel comfortable being in a place with adults who were in some cases a lot more mentally ill than I was.”

Earlier this month, CEO of advocacy charity My Voice Jersey Patricia Winchester called out the “inappropriate admission of children in the adult unit” at Orchard House, saying she knew of children as young as 14 being admitted.

A local mother told Express that it was a “horrible place” for her teenage daughter to stay, given the number of severely unwell adults around, and that the young girl started “developing tics and her self-harm got worse" while she was there.

The young man appealed to Government to "listen", going on to say: “Obviously there are a lot of people just like me… we can’t do this alone. 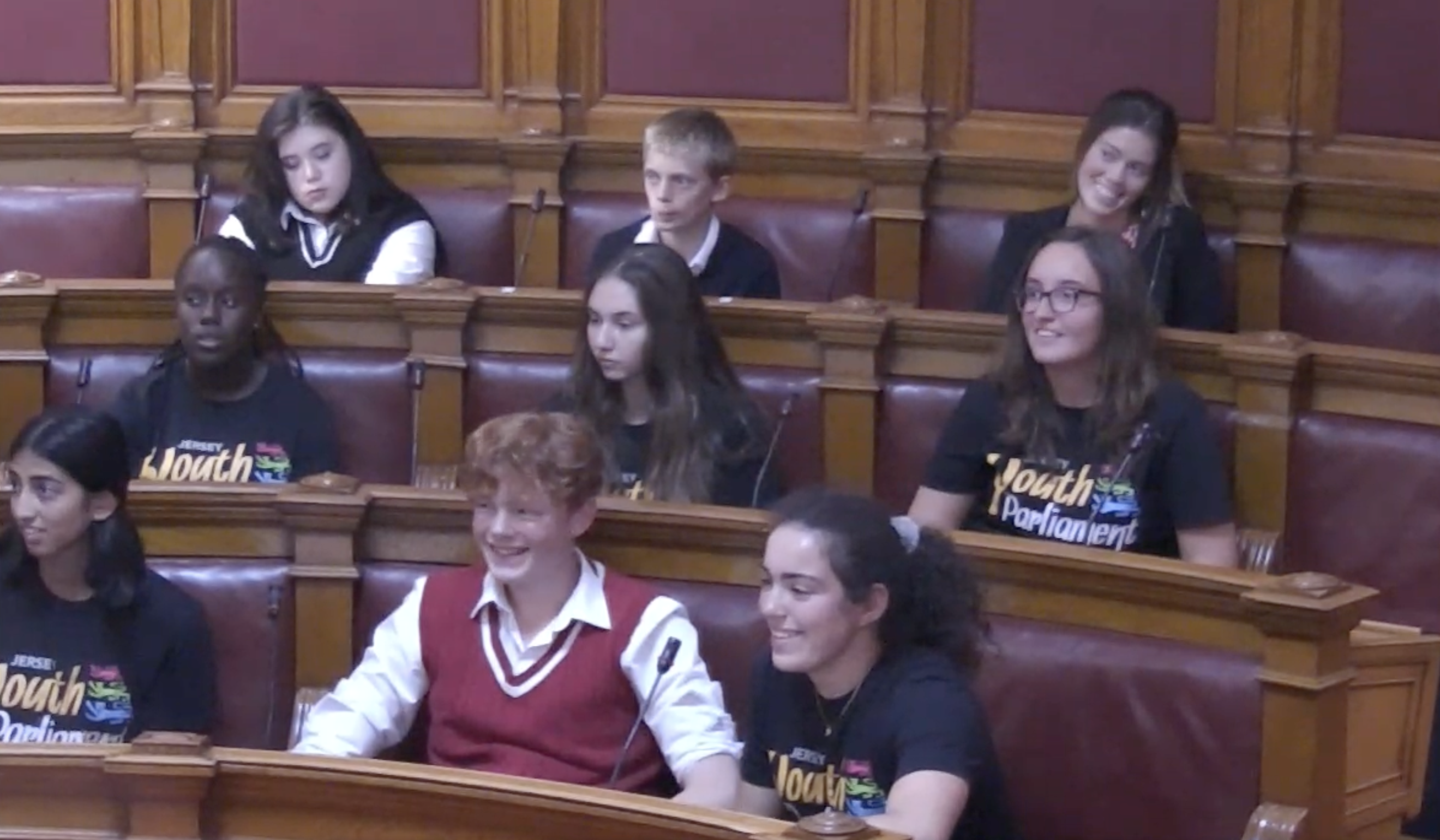 Pictured: The Youth Parliament suggested a number of improvements for the island's mental health services, including better funding and early prevention strategies.

The young woman who spoke out on her time in Robin Ward argued that a new facility should be created for children - "not a hospital, but not a house - something between Orchard House and Hope House.”

She suggested it be split into age groups, with separate areas for young children and teenagers, adding that there should be a bigger intervention team to prevent things from ever getting to the stage children need to be put in a hospital environment.

The wider Parliament also detailed a survey they had put out to children across 17 schools. Of the 288 responses, 37% said they had experienced poor mental health in the past year, and 56% said that they felt the support received was inadequate.

Summing up their position, the Youth Parliament told Ministers: “We think it’s unacceptable that despite so much emphasis from organisations and charities on the need to change, that there is still a lot to be done that hasn’t been listened to.

"Our main concerns being that, despite having a new budget to turn things around, that budget can be spent on the wrong things.

“You’ve heard of our experiences, let us try to make sure that all the other young people in crisis get the right support - don’t let it happen to anyone else.”

The Assistant Minister with responsibility for CAMHS, Deputy Trevor Pointon, said he was “deeply saddened” by the testimonies.

He added that he was “really concerned about the challenges of the staff in Robin Ward", noting that "they’re not dedicated CAMHS staff." 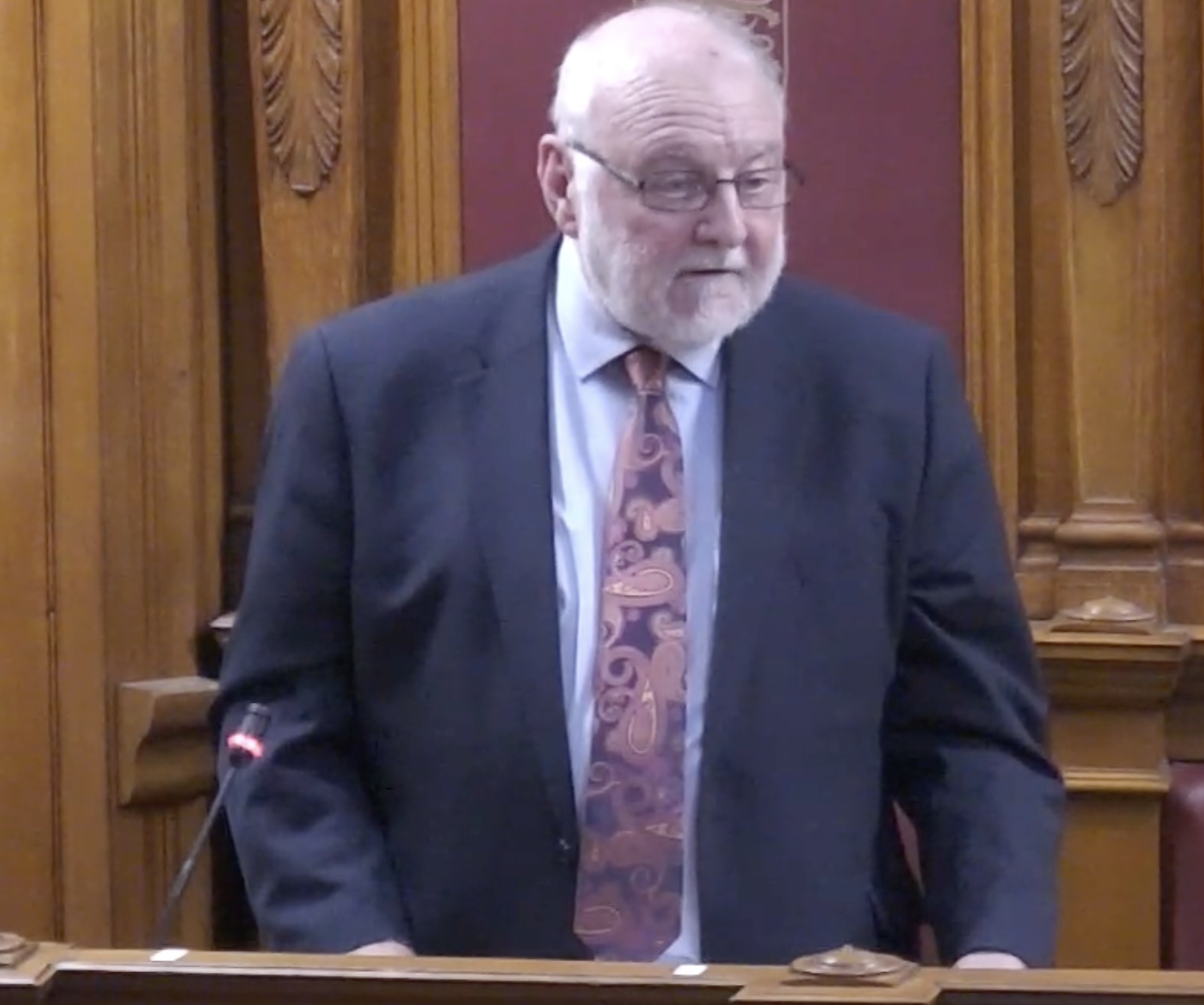 Pictured: Deputy Trevor Pointon said he was "really concerned" about the lack of dedicated CAMHS staff on Robin Ward.

“There are psychologists and occupational therapists who advise, and occasionally the dedicated CAMHS staff get in there. But it can be difficult at times, and it’s something we would want to address, but there isn’t another facility at this point in time."

Deputy Pointon continued: “We’ve had a real difficulty over the last 18 months or so, and that is because a significant number of people who would have gone during this period to Orchard House, would have gone to the mainland for specialist care, but travel restrictions have prevented us doing that.

“And of course it’s not ideal to shift young adolescents, people who are in distress, off the island into a strange environment and to move away from their parents and friends."

He noted, however, that plans for the new hospital at Overdale include "dedicated provision for adolescents in crisis and it won’t be that it’s part of an adult mental health facility.”

“I don’t know whether that’s of any reassurance to those individuals that were so distressed, but in many respects we share that distress and want to improve matters considerably.”

The testimonies in yesterday's Youth Parliament captured the attention of former Children and Education Minister Senator Sam Mézec, who praised the bravery of the young people in speaking out about their experiences, adding: "I really hope many will listen to them and include them in discussions on how we improve."

Senator Kristina Moore commented: "We owe it to them to deliver better care for our young who are in crisis."

Thanks to those members that came to watch. Hopefully given members lots to think about and looking forward to working together soon! pic.twitter.com/VVNzZqQ4TY

Deputy Rob Ward, who watched the meeting in person alongside Reform Jersey colleague Senator Mézec, said that the Youth Parliament had sent a "a clear message of the need to listen to young people and provide more mental health support."

Yesterday’s Youth Parliament meeting also touched on sexual and racial discrimination, an “insufficient” PSHE curriculum, the treatment of children with autism, and getting Jersey carbon neutral by 2030.

The meeting comes as part of Democracy Week in Jersey.

Other events forming part of the week include live Q&A sessions with States Members via the States Assembly Facebook Page, a free tour of the States Chamber which will be running throughout the week, and a photo contest.

Like last year, Democracy Week will also see a school bus transformed - this year, it will feature ideas from Victoria College students about how they would improve the island if they had £1m.