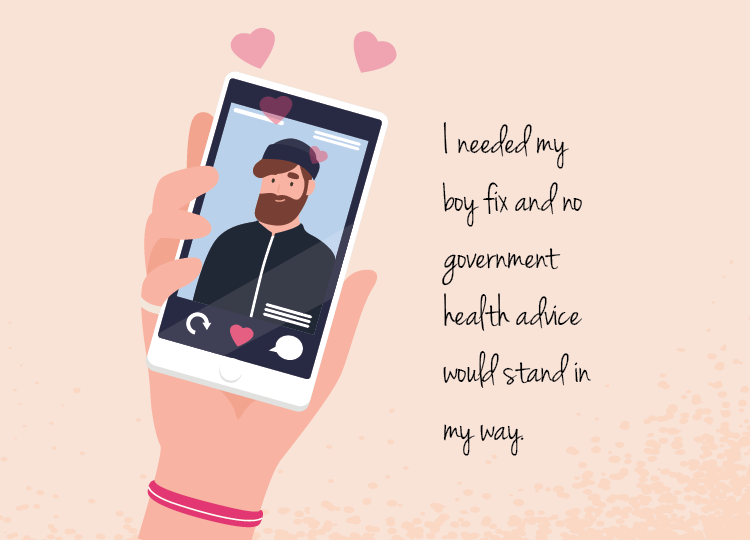 Like everyone else, I’ve been cooped up inside for months – and yet I’ve still managed to find infinite ways of publicly embarrassing myself.

Whether it’s awkward conversations on stilted video conferences, or contributing the wrong remark at a virtual wine tasting – it’s clear that staying in, hasn’t completely altered my personality. Pity.

But I have a confession to make, diary. This last month, I had been really struggling.

It can get lonesome being shut away from everyone you know. I don’t get the rush of being eyed up when I walk down the street in my tightest jeans, I can’t indulge in a little flirtation with the cute bartenders and baristas, and I’m cut off from seeing my gal pals. Overall, no one is giving me any attention, and it’s sending my anxiety sky high!

I had to find a coping mechanism in the confines of my own home. Yep, you’ve guessed it: Fenella Bond hit the dating apps. Alright – I caved! I’m only human! I needed my boy fix and no government health advice would stand in my way. 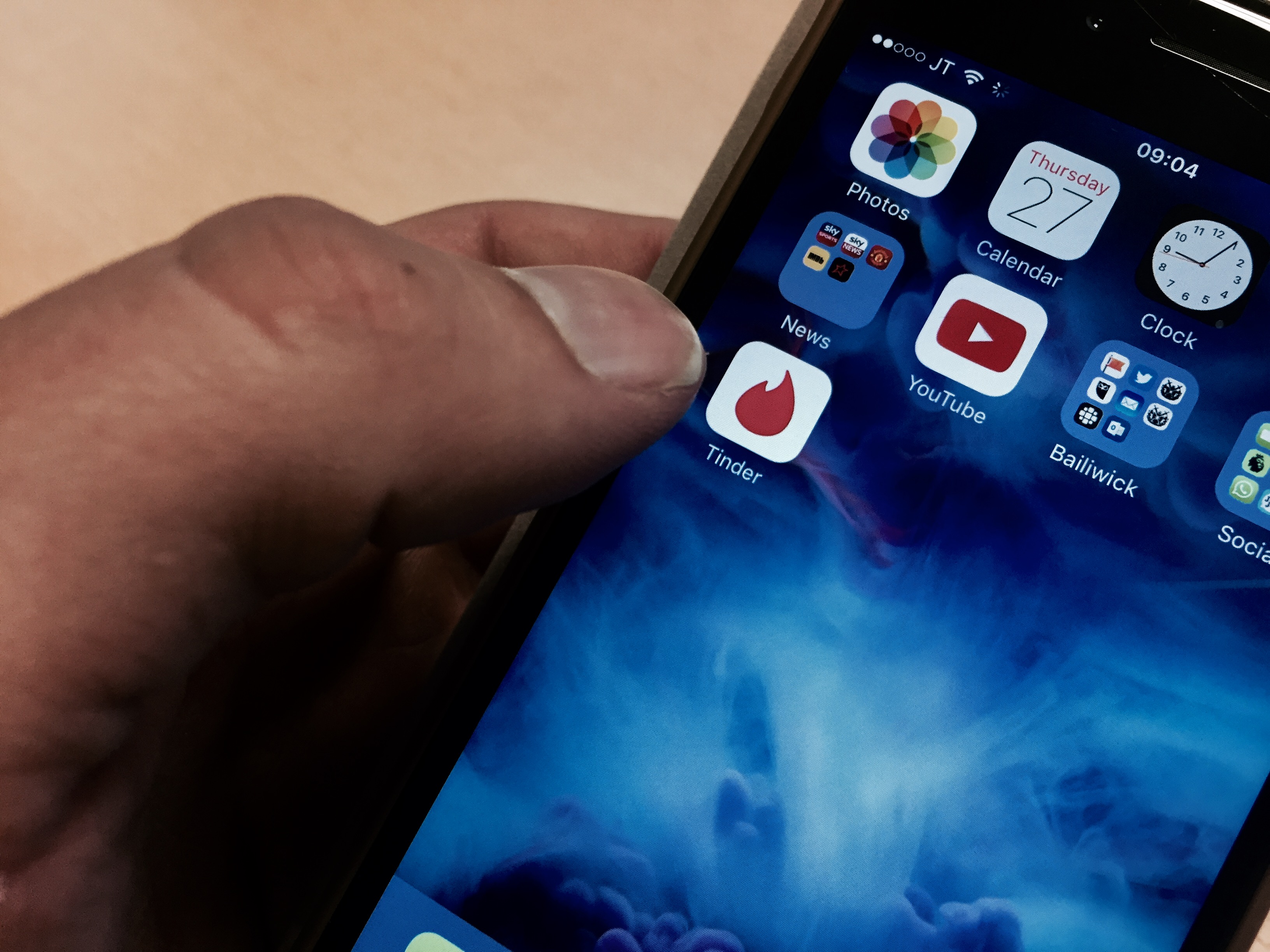 Pictured: "I copied and pasted the profile across all the apps and plunged headfirst into the cesspit of online dating (ew)."

I downloaded them ALL: Ember, Flutter, Loindr, Venn (the list goes on...) and I got to work. I was on the clock and I knew I needed a date that evening or I might need to call the Samaritans.

I set up my profile (the same on each app, just to save time). Picking photos where I look super-hot took a while because there are SO many, but I settled on:

Wow, that took a while. Now to the bio. I needed something which warns off the fuckboys, but something that isn’t so intellectually intimidating that it narrows my choices down drastically. After endless drafting and tweaking, I finally settled on: “If you can’t laugh at yourself, I probably will. Golfers need not apply.”

I copied and pasted the profile across all the apps and plunged headfirst into the cesspit of online dating (ew).

Oooh the matches are already rolling in! I had to come up with some ground rules fairly quickly so that I could most efficiently make my decisions. I decided I would swipe left to reject:

This is a dating GAMECHANGER. Finally, I can audit the idiots I go on dates with before I’m forced to have a mind-numbing conversation with them over dinner. This is perfect. I’m having the time of my life here.

I’m having a terrible time. Everyone I’m chatting with is either a moron, a pervert, or a golfer who can’t read instructions. What is wrong with them?

I thought this chat was going really well with this accountant until he found me on Facebook and started spamming me with X-rated photos. Who said romance was dead? I can’t wait to tell this story to our grandchildren.

Alright, alright, it’s possible I may have spoken too soon. I’m chatting with this guy on Flutter (that’s the one where the woman has to initiate the conversation – it’s basically Loindr, but for people with degrees) and he actually seems really nice. He immediately shared my distaste for golf and even asked me questions about my life (oh god, the bar is SO low). He was making me laugh and we were actually getting on really well. 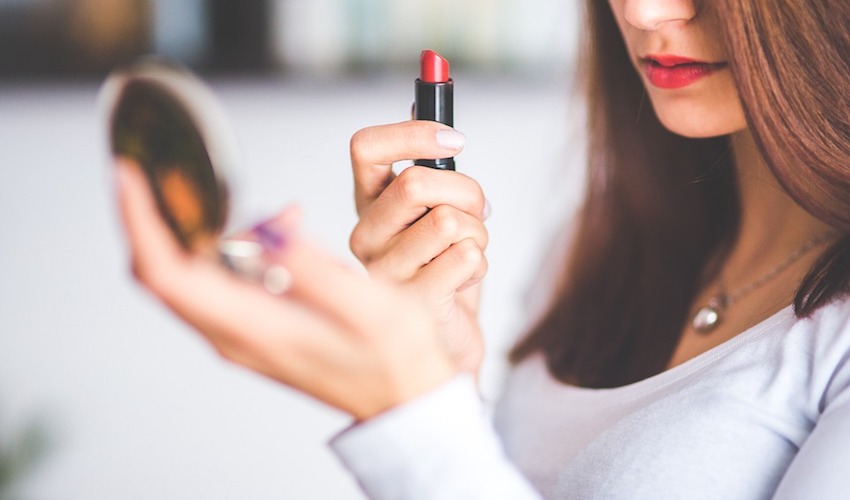 Pictured: I genuinely couldn’t believe my luck that I’d stumbled upon this incredible man on my first night of online dating.

I took the plunge, asking if he wanted to have a video date later on this evening.

Oh good lord, put me out of my misery.

YES! Fenella, you charming minx, you have landed yourself a date with a very dishy man – all from the comfort of your own living room. Perhaps all is not lost after all.

We agreed to meet in an hour so we’d each have a bit of time to get ready and order some food in. I must have changed outfit about eight times at this point because I haven’t had to dress up in what feels like a year. I ended up in a very chic silk blouse and skinny jeans and made sure I was a few glasses of prosecco in before the call.

He called and he is just as dreamy as he looked on his profile. We both ordered the same kind of takeaway so it would feel like we were out at a restaurant, and the conversation just flowed.

We talked about everything from awkward first date stories (I had PLENTY), our shared hatred of golf, our travel dreams, how we’re coping whilst being cooped up. Even on the video call he had this amazing way of looking like he was staring directly in my eyes whilst I spoke.

I genuinely couldn’t believe my luck that I’d stumbled upon this incredible man on my first night of online dating. Dinner was well over, and we were still chatting into the night. Everything was going swimmingly, until...

His phone put me on hold, so I assumed he was getting another call. When he came back he apologised and explained it was his “nightmare of a sister” checking up on him.

“Oh, you might know her actually – Vicky? Ah, she hates it when I call her that. Victoria.”

My heart sank and tentatively I asked their surname before my worst fears were confirmed. This dreamboat before me was the brother of my arch-nemesis. Victoria Pinkerton-White.

This was not going to be pretty.

Traumatised, terrified and a little tipsy but yours forever,

FOCUS: Tale of the Century

Cafés and restaurants due to reopen this month