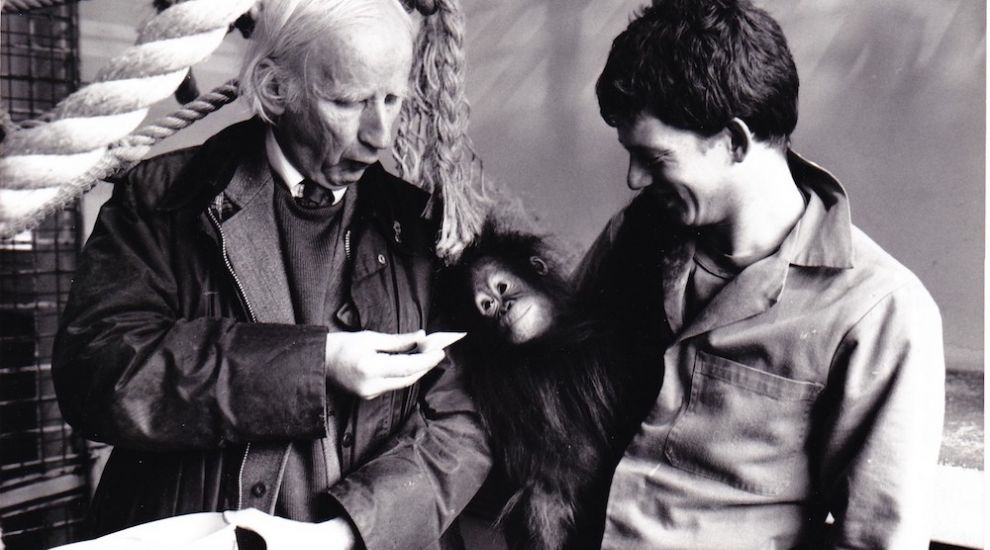 An Indian conservationist has shared the story of how reading about Jersey's legendary animal kingdom champion, Jeremy Mallinson OBE, as a child inspired him to walk into a career on the wild side.

Mr Mallinson, who played 'right-hand man' to Jersey Zoo founder and played a key role in saving the lion tamarin before rising to the role of Zoo Director, recently passed away aged 83.

Shubhobroto Ghosh, who works for World Animal Protection in India, attended a training course at Jersey Zoo from September to December 1999, during which time Mr Mallinson was his teacher and mentor.

Inspired by the man he described as "one of the very finest gentlemen and committed animal protectionists" he had ever met, Mr Ghosh decided to pen a tribute to him in his book, 'Dreaming in Calcutta and Channel Islands', which was published in 2015.

Having read about Mr Mallinson's sad passing, he decided to share that heartfelt tribute with Express...

"It is said of some people that even though they be your enemy you would find it difficult to go against them because they are so polite, courteous and gentle. Mr Jeremy J. C. Mallinson, whom I had the privilege of knowing during my course in Jersey from September to December, 1999, is just that kind of person. 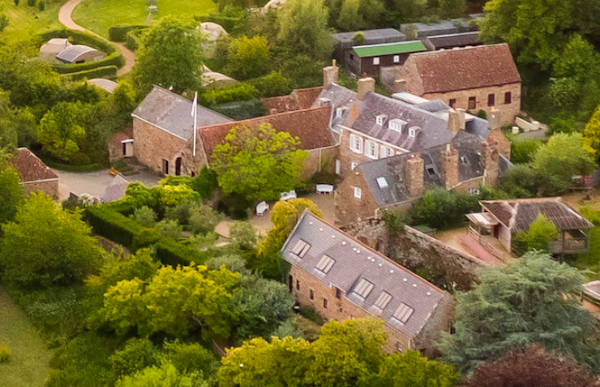 Pictured: Shubhobroto Ghosh was a student of Jeremy Mallinson OBE from September to December 1999.

What follows is my homage to a man who must surely rank as one of the nicest people I have ever been privileged to meet and one of the animal kingdom's great champions.

My association with Mr Jeremy Mallinson began long before I even met him. It was through Gerald Durrell's books that I became a part of his family of human and animal friends. Mr Mallinson, needless to say, was an integral part of that family establishment.

In his book 'The Ark's Anniversary', Mr Durrell wrote, '...With his buttercup coloured hair, bright blue eyes and Duke Of Wellington nose, Jeremy was as committed to the animals in our care as if he had given birth to each of them personally.'

I was particularly enamoured by Mr Durrell's description of Mr Mallinson 's conduct in his book 'Catch Me A Colobus'. 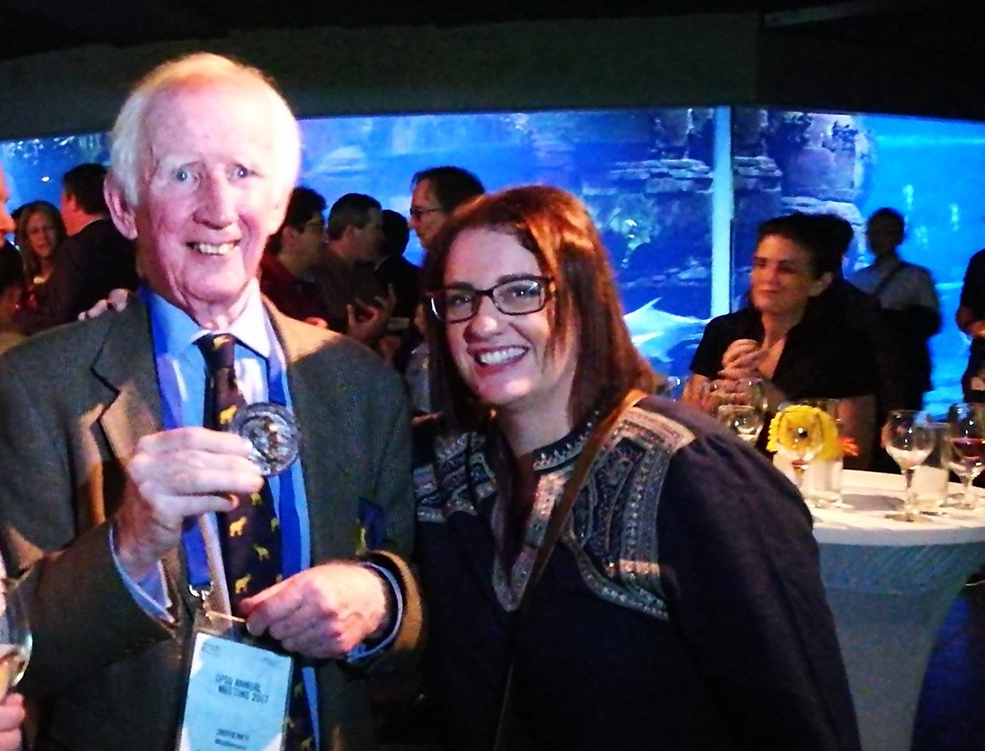 I was so impressed by the chapter 'Just Jeremy' during my schooldays that I would pretend to be Jeremy Mallinson myself.

I would knock on the door and in response to, 'Who is it?' or ,'Come in'. would utter 'Just Jeremy' along the lines of the description given by Mr Durrell. No doubt this prank irked my own family at times.

It was only much later that I got the opportunity to meet the man in person in Jersey.

As a member of the Jersey Wildlife Preservation Trust of course, I was well informed of Mr Mallinson's ambitions to "do something worthwhile for the animal kingdom" and "sow the seeds of awareness."

Mr Mallinson was supposed to speak after the trainees and I was rather apprehensive as to what he would have to say about an animal rights activist like me. To my pleasant surprise, Mr Mallinson appreciated my comments and said that the Born Free Foundation had done some good work along with the Royal Society For the Protection Of Animals (Mrs Lee Durrell also appreciated the work of the Born Free Foundation).

His speech revealed him to be a most courteous gentleman - an image I maintain to this day. 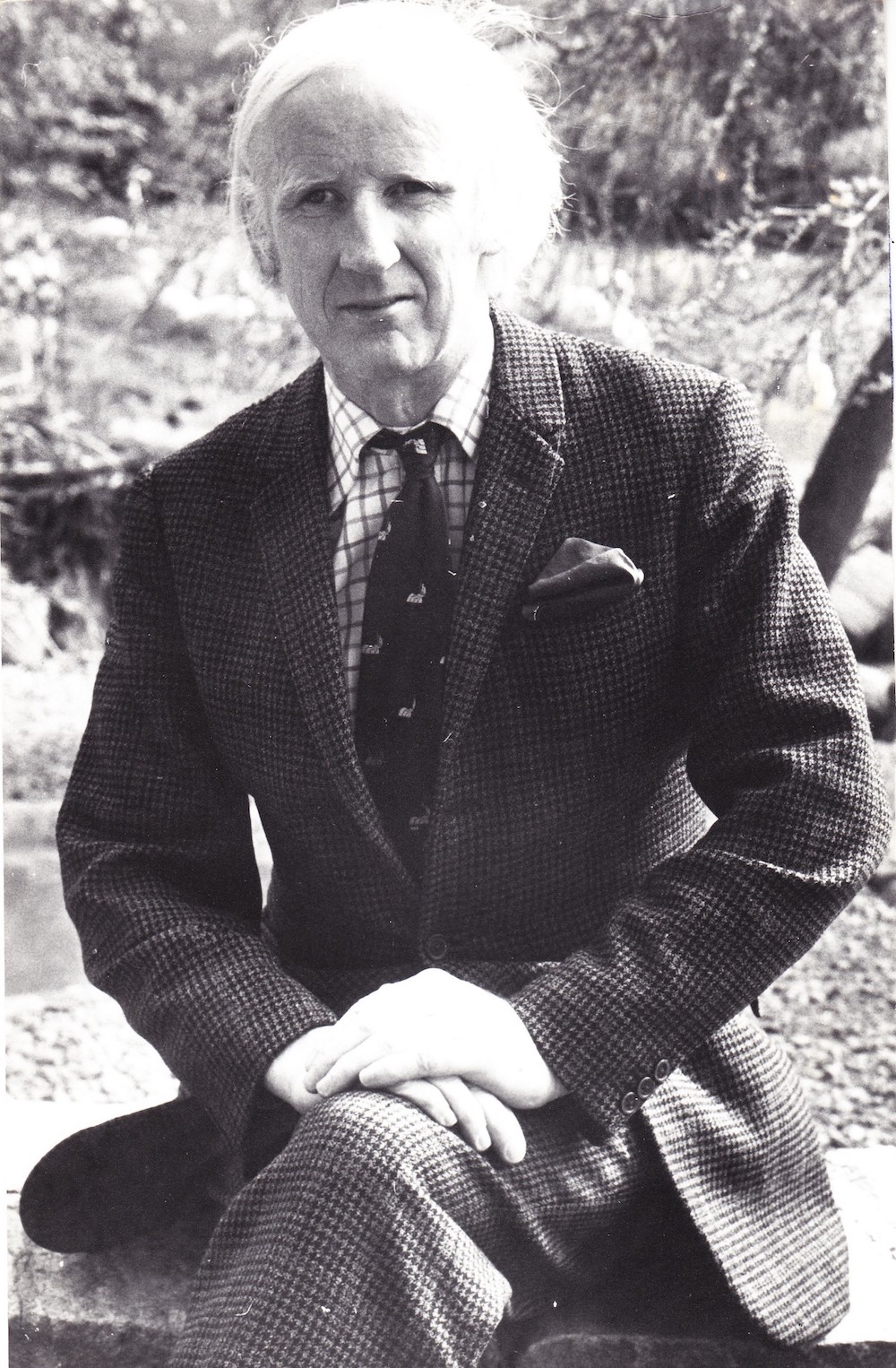 Later during the trainees' party, I was able to talk to him personally.

He was most amused by my childhood demeanours with regard to acting out 'Just Jeremy'. We were eating while discussing this and Mr Mallinson turned to Mrs. Durrell and said, 'Do you hear what this man has to say? He says he used to act my part in 'Catch Me A Colobus' and say 'Just Jeremy' while knocking on the door.' Mrs Durrell smiled, and replied: 'Well, you still say that to me sometimes while visiting my flat, don't you Jeremy?' We all laughed.

I had a great desire to see the old books in Mr Mallinson's library and he encouraged me in this. I could discuss animal welfare issues with him. In reply to my question asking for his opinion on the Born Free Foundation, he said, 'I have nothing against them.' 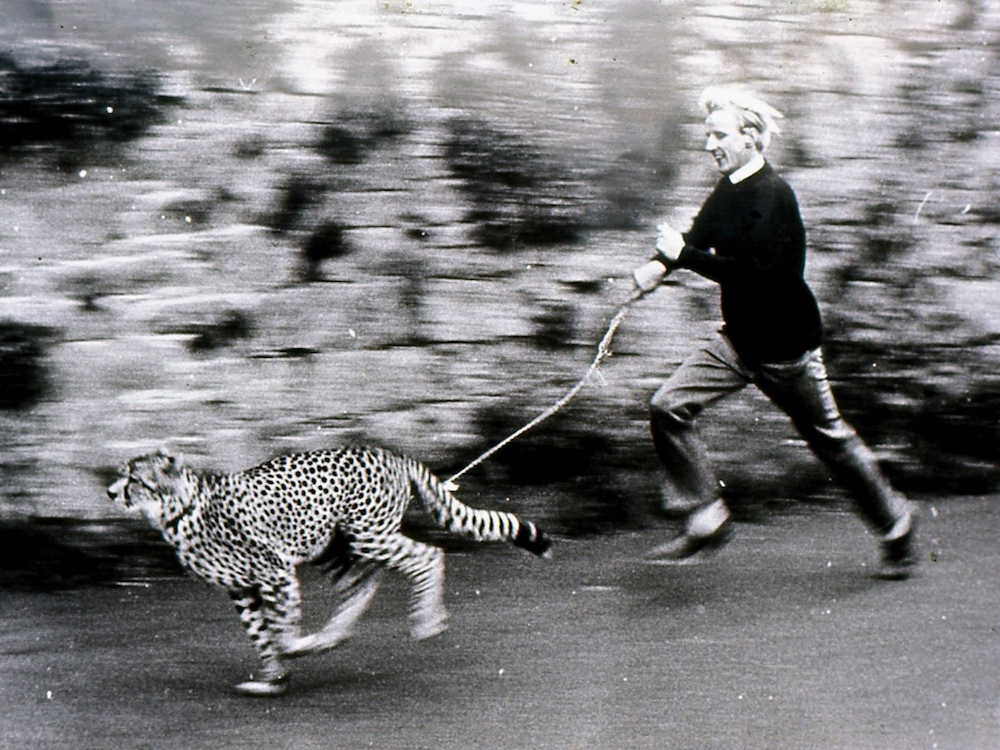 Pictured: Mr Mallinson was well known for rearing a cheetah in the grounds of the Trinity wildlife park, sometimes taking it on runs, like here, around 1960. (Durrell Wildlife Conservation Trust)

I did get to see Mr Mallinson's library when he went away to South Africa. His secretary, Ms. Bronwen Garth-Thornton, helped me to locate the old collector's items and I am immensely grateful to her for her fortitude, care and cooperation.

Sharing Mr Mallinson's interest in literature, I was extremely pleased to know he had won a French award for his collection of Lawrence Durrell books. I bought his book 'Durrelliania' and enjoyed it thoroughly.

Later on, I sent him some items on Lawrence Durrell from my collection to add to his collection of 'Durrelliania'. Hearing of my interest to read John Aspinall's 'The Best Of Friends', Mr Mallinson unhesitatingly lent me his copy. He gave me copies of his writings on animal welfare.

His deep concern for animal welfare is evident in his books. His description of his relationship with Jambo the gorilla and Chinky the lioness in his book 'Okavango Adventure: Wildlife Adventures In Southern Africa' is most touching.

I also learnt of his association with noted animal welfare personalities like Sir Christopher Lever (author of 'Naturalized Birds Of the World'), Richard Adams (author of the best selling classic book on rabbits,'Watership Down'), Mr. Peter Davies of Royal Society For The Prevention Of Cruelty To Animals, Mr. Andrew Dickson (Chief Executive Of the World Society For The Protection of Animals) and his former colleague Mr. Stephan Ormrod (Curator Of Mammals at Jersey Zoo at one time and later director of the Zoo Check Project of the Born Free Foundation). 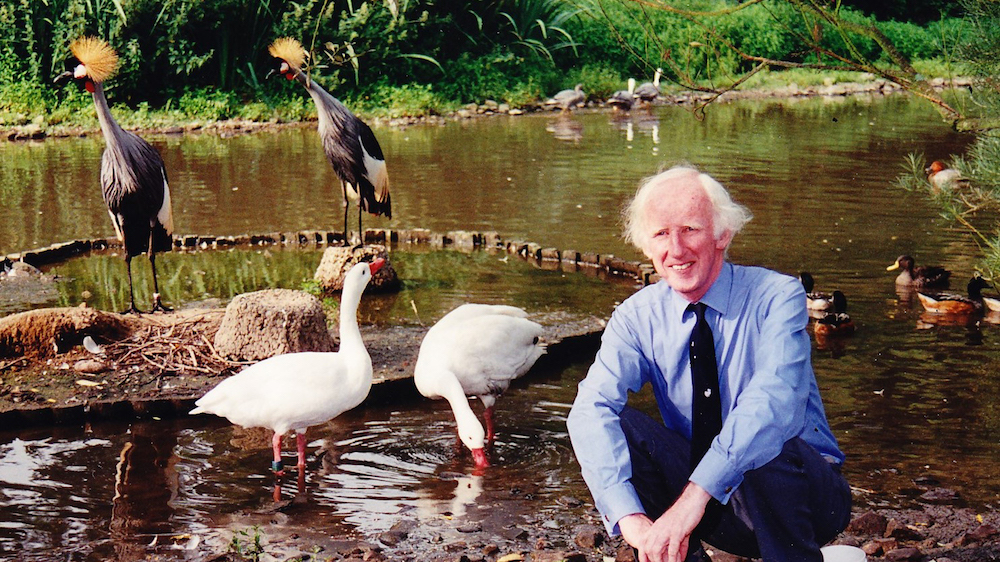 His deep regret at not being able to include a passage from 'Black Beauty' by Anna Sewell in an anthology of short stories edited by him is evidence of his intense concern for animal welfare.

I really admired Mr Mallinson's academic leanings and could give him some notes from an old encyclopaedia on natural history (Edited by Charles Knight and published in 1854.) One note was on a captive Javan Rhinoceros, and it gives me immense pleasure to say that Mr Mallinson found it interesting and valuable.

Mr Mallinson's character is well portrayed in Gerald Durrell's biography written by David Hughes. Quotes like 'I am infuriated by bad manners and complacency and I have no sympathy for stupidity' and 'I am not a yes man, but I am a disciple (of Gerald Durrell)' reveal the impeccable courtesy of this very fine gentleman.

My favourite memory of Mr Mallinson is observing him in the morning from the Les Noyers corridor. Having woken up late as usual and brushing my teeth, I would find him walking around the campus with his umbrella. He would come in very often, enquire about the welfare of trainees and Madam Olwen's dog, Charlie. Assured everything was all right he would would exclaim, 'Oh, good, good, good!' in his inimitable style of speaking, which, admittedly, I found sometimes a bit difficult to understand. 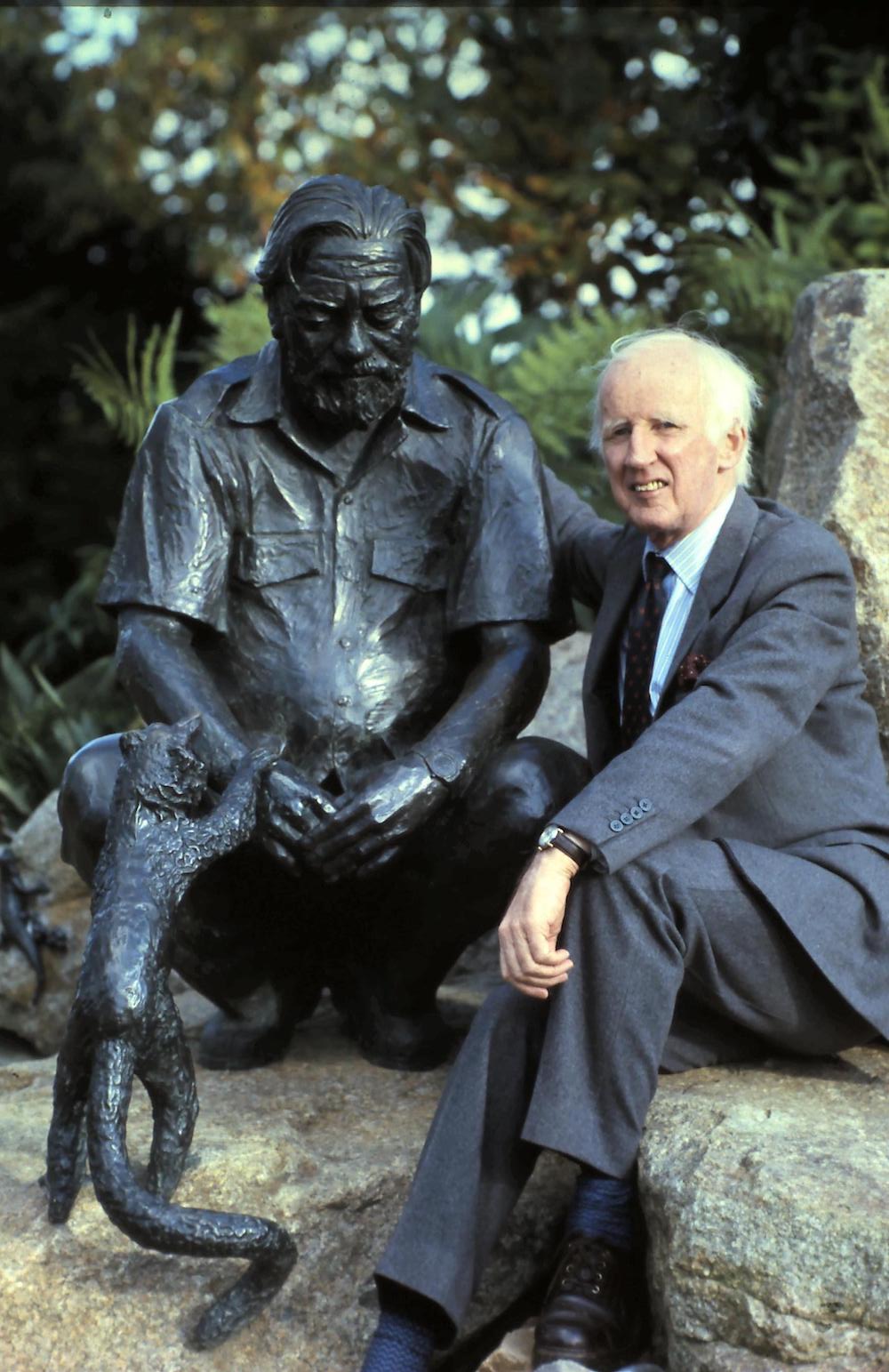 Before leaving Jersey, I went to his office and thanked him for all his help. Noticing his picture in front of Buckingham Palace on receipt of the OBE, I congratulated him. 'That is the result of a team effort, you know', he pointed out with typical modesty.

I told him that I was scheduled to meet Mrs Virginia McKenna in England. 'Oh, good, please do. She used to come for the biannual RSPCA meeting. She has always been most courteous - in spite of the fact that we beg to differ on some fundamental animal conservation/welfare issues! Please pass on my regards to her and her son, Will Travers.'

Mr Mallinson's parting words exposed his greatness in being able to reconcile properly with people of differing views.

I consider it an enormous privilege to have known and met a person like Mr Jeremy Mallinson, a person who came to Jersey Zoo on 'a temporary basis' and after 41  years of service there wondered, 'How temporary can temporary be?'

I knew him for only three months but during that period I developed nothing but admiration, respect and reverence for him.

I can do no better to end this tribute than quote Mr Mallinson's mentor, Gerald Durrell, writing in the foreword to his book 'Okavango Adventure', 'I wish there were a few more people in this world like him.'"