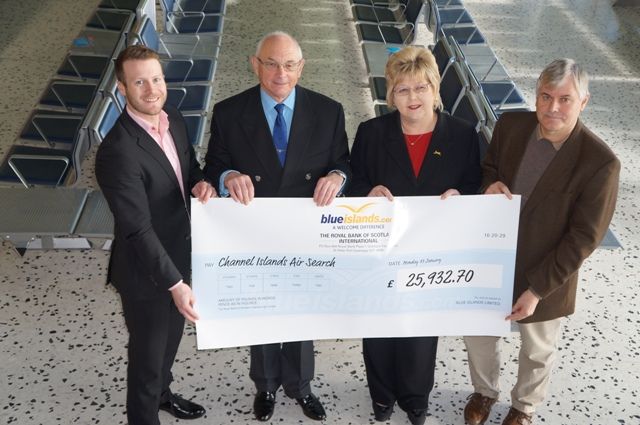 Blue Islands have raised over £25,000 for the Channel Islands Air Search.

The airline donated £5 from every return booking from Guernsey and Jersey during the six-week campaign for the charity. Additional donations from passengers were made on the Blue Islands Lions Pride Appeal ‘justgiving’ page and one anonymous donor very generously gave £1,000.

Roger Dadd, Founder of Channel Islands Air Search, said: "The crew were astounded at the speed with which Blue Islands responded to Air Search in its hour of need. This donation of £25,932 is a magnificent contribution to the ongoing fund raising efforts of the Supporters (The Friends of Air Search) in each of the Channel Islands. Plans for the aircraft replacement programme are now becoming established and we hope a more detailed announcement can be made later in January.

"The generosity of everyone at Blue Islands is about far more than this superb donation as it has been a great boost to the moral of everyone at Air Search. We are faced with a monumental fund-raising task and very much hope it will give a lead to other companies and organisations whose support would be most welcome."

Rob Veron, managing director of Blue Islands met Roger to hand over the funds raised, and said: "As a pan-island business inextricably linked to the work of the Air Search, it was important that we supported.  I am thoroughly delighted that we are able to give the Air Search such headway into their vital fundraising.  As we further extend our relationship with the Channel Islands Air Search, we look forward to showing our continued support in the future.”

The Channel Islands Air Search was established 33 years ago and crewed entirely by volunteers who ensure the service is operational 24/7. Each year the costs to keep the Lions’ Pride airborne is around £100,000. In addition to the annual running costs, funds have to be raised for capital items such as engine replacement programmes and other essential equipment.

Donations can still be made to the appeal on the following ‘justgiving’ site; www.justgiving.com/blueislands-lionspride