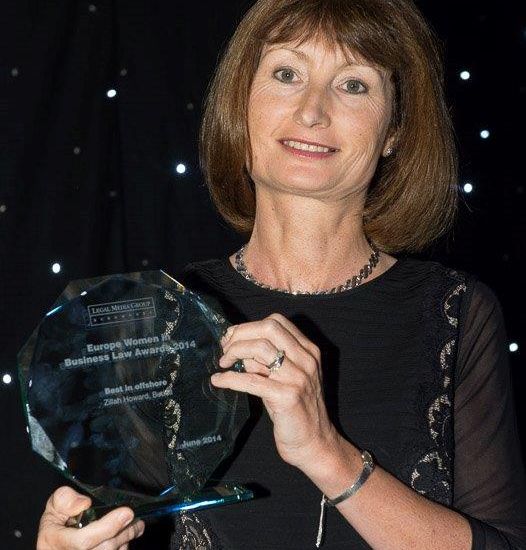 For the third successive year, Bedell Cristin partner Advocate Zillah Howard has been named Best in Offshore at the Europe Women in Business Law Awards organised by the Euromoney Legal Media Group.

The awards celebrate the achievements of women leading the field in the legal sector across Europe as well as those national and international firms in Europe committed to advancing women in the legal profession.

Managing Partner, Richard Gerwat, said: "It is a first class achievement to have secured this award once again and to have earned recognition for her technical excellence alongside so many other leading female lawyers from the City and abroad. Zillah deserves the congratulations of everyone at the firm."

Howard was presented with the award at a ceremony at the London Hilton Hotel on Park Lane, attended by more than 200 leading lawyers from many of the major law firms in London and across Europe. She was once again the only lawyer from the Channel Islands to receive an award. A specialist lawyer with Bedell Cristin’s top tier international private client group, she focuses on trusts and foundations, international estate planning issues, and philanthropy.

Described as a "standout practitioner" in the current Legal 500 directory, and included in Band One of ranked lawyers in the Chambers 2014 legal directory, Advocate Howard has a career in offshore legal services spanning more than 25 years. She has been included in Private Client Practitioner's list of the UK’s 50 Most Influential Private Client Practitioners for two consecutive years. She has also been named in the Honours List in the Leading Lawyers’ category of the Citywealth Leaders list for three consecutive years, and is among Citywealth’s 2013 list of the IFC Power Women Top 100.