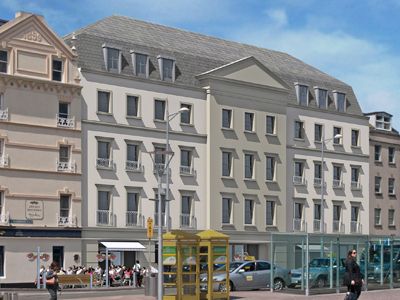 Jersey property developer Comprop has begun work to redevelop the former Southampton Hotel and Traders bar site into offices and a new restaurant.

A contract has been entered into with Jersey building contractor Camerons, who will undertake the work. This will involve maintaining the majority of the original façade and carefully dismantling the adjoining three separate buildings of the Traders site to create one complete building. The £8 million of private investment in the redevelopment will include a basement to be used in conjunction with the ground floor, which has been earmarked as a Brasserie / restaurant operation. The remaining four floors are designed as high specification office accommodation which can either be let as individual floors or as a whole.

The site, which faces onto Weighbridge Place, will also see enhancements and remodelling of the pavements and external areas around the Southampton, to create a 'street scene' that is both vibrant and in-keeping with Weighbridge Place, and which has been agreed with Public Services.

'We are delighted to be working with an entirely local team of consultants, to work on this landmark site. It has taken four years of extensive consultation with the Planning Department to enable us to be in a position to start work on this redevelopment. Currently we aim to complete the project by the Autumn of 2015.

'The team has experience in dealing with complex projects of this nature which incorporate a „listed element‟ and, whilst there will be challenges to deal with during the work, we are looking forward to a completed building that will complement the former Southampton Hotel and once again bring vitality to the site and Weighbridge Place'.

'We are delighted to have been appointed by Comprop to undertake this project, which is significant to Jersey‟s history, particularly as the Southampton forms part of what has become the „recognised face‟ of the end of Jersey‟s Occupation on 9 May 1945.

'Pre-preparation works will take place internally on the site between now and Christmas and, following a short demolition period, the construction will begin next Spring. Extensive consultation and planning exercises have been undertaken and agreed with all of the relevant authorities, to ensure a staged redevelopment of the hotel and buildings and the improvements to the public realm. We are looking forward to starting on this exciting project and returning the Southampton site to its former glory'.