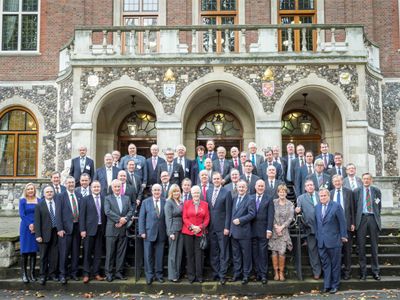 Deputy John Le Fondré represented Jersey at the 47th plenary conference of the British Irish Parliamentary Assembly in London from 20 to 22 October 2013.

Deputy John Le Fondré represented Jersey at the 47th plenary conference of the British Irish Parliamentary Assembly in London from 20 to 22 October 2013.

Also attending the conference were representatives from the UK Parliament, the Houses of the Oireachtas, the Scottish Parliament, the Northern Ireland Assembly, the Welsh Assembly, the High Court of Tynwald (Isle of Man) and the States of Guernsey. Issues under discussion included tourism, membership of the EU and renewable energy.

Deputy Le Fondré said: “The conference provided a valuable opportunity for member administrations to compare strategies in addressing issues that are common to us all. I held interesting discussions with politicians from all the administrations, covering a number of useful topics. It is important that Jersey is represented in this forum, and that we are able to deliver the very positive message of the Island’s contribution to the economy of the British Isles.”