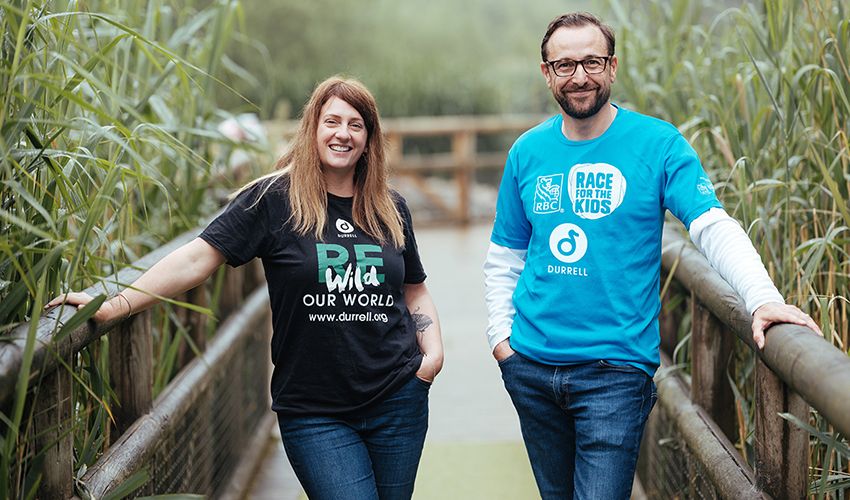 Durrell is delighted to have been chosen as this year’s charity beneficiary for RBC’s Race for the Kids Jersey (RFTKJ) which will take place at 12:00 noon on Sunday 19 September 2021 at the Elizabeth Marina, as part of the Super League Triathlon (SLT) Race weekend.

This global family fun run is returning, in-person, to Jersey following the virtual 2020 event, and this year RBC Race for the Kids will raise funds to support Durrell's Future Conservationists Programme and Nature Connection at Jersey Zoo, helping to improve mental health and wellbeing of Jersey’s youth.

“Durrell aims to empower people of all ages to embrace their wild sides and reconnect to nature.  The natural world needs us to take better care of it and the funds raised from this project will give teenagers the much-needed opportunity to engage with a world class conservation organisation and inspire them to take their place in leading the conservation movements of the future.  Thanks to the support from RBC Race for the Kids we can give more teenagers this opportunity and work with them to create a healthier more colourful world.”

The race is suitable for all the family and takes place on the second day of the Super League Triathlon Jersey weekend, of which RBC is a community sponsor. The Race itself follows the course the world’s top professional triathletes take, beginning at Waterfront Gardens and heading around the picturesque Elizabeth Marina.  Participants will receive an RBC technical running-shirt and finisher medal.

“We are thrilled to partner with Durrell this year, such a well-known charity on the island with a long history of supporting nature and our community. I am delighted RFTKJ is able to return in person in 2021 as we continue our global strategy of supporting youth by raising funds for Durrell’s Future Conservationists Programme.”

Organisers are encouraging early sign ups as RBC are generously donating an extra £5 per person to Durrell, on top of the registration fees, until the end of July.

“We are so grateful to RBC for selecting Durrell as the charity beneficiary of this fantastic event. RBC’s focus on youth ties in perfectly with our own ambitions to reconnect people, particularly youth, to nature and inspire the conservation leaders of the future. “

RBC Race for the Kids welcomes people (and dogs) of any age to walk, wheel or run the 2.5k or 5k course, raising fund for Durrell’s Future Conservationist Programme. Anybody can take part, it’s not just for kids so help us to make 2021 the biggest and best race yet.