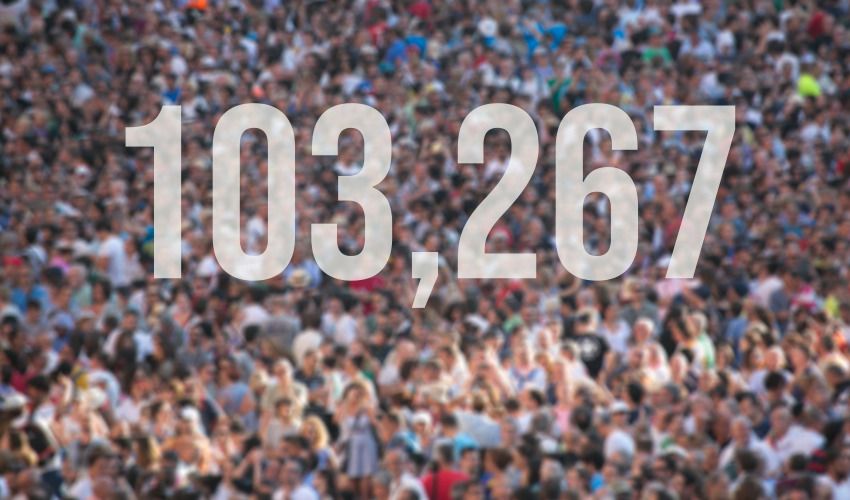 The results of a survey that will underpin island policymaking over the next decade ranging from employment to education and health are in... Jersey's population stood at 103,267 in March 2021, 5.5% higher than in 2011.

The figures were released this morning in the hotly anticipated 2021 Census, whose total population figure includes 2,205 local residents who were absent from the island on Census Day (21 March 2021).

Previously, officials had to estimate the overall number of people living in the island based on government data. The last estimate in 2020 was around 108,000.

In the report on the results, Statistics Jersey noted how the effects of the travel restrictions in place at the time were apparent in the figures with the number of short-term visitors (480) around a quarter of that recorded at the 2011 Census (2,052).

As well as providing information about the number of people living in Jersey, the census also provides an insight into islanders' ages, ethnicities and employment and housing situations.

To help you make sense of how things have changed over the years, Express has broken down the results of the latest census in a series of graphs including data from the 2001 and 2011 Census... 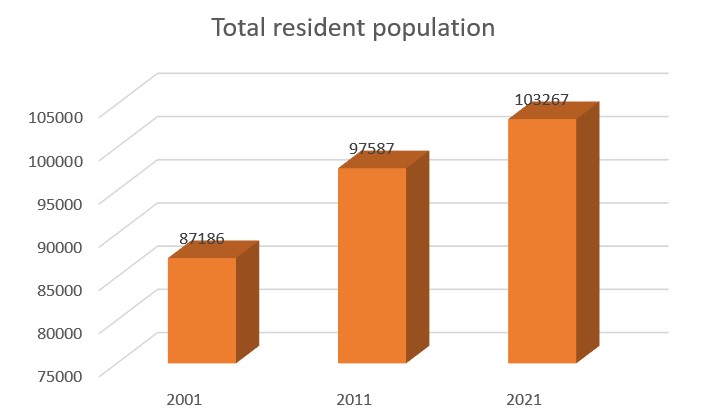 The increase represented a change of 5.5% over 10 years. 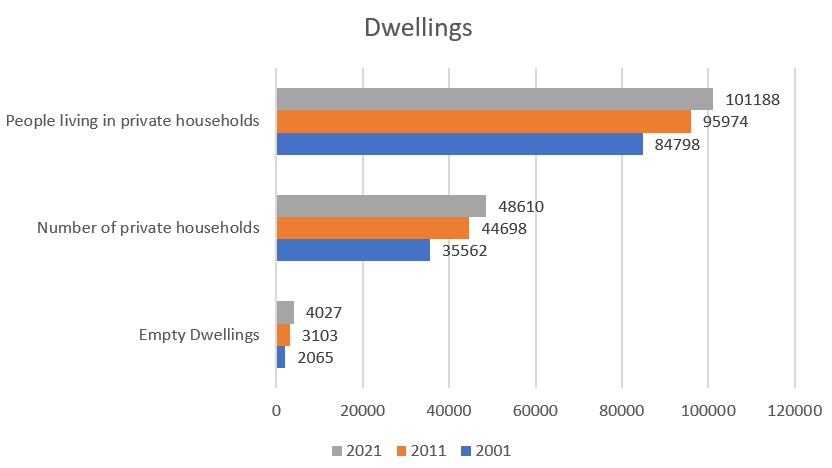 A total of 4,027 private dwellings were identified as vacant on Census Day, corresponding to a vacant rate of 8.3%.

Both the number and proportion of vacant properties has increased since 2011. At the time, there were 3,103 vacant dwellings – a vacant rate of 6.9%.

Excluding those living in communal establishments, 101,188 people were living in 44,583 dwellings in 2021, an average of 2.27 persons per dwelling. The ratio of number of people per private dwelling has been falling over the last five decades.

Over a third (35%) of the island’s total population lives in St. Helier. St. Saviour and St. Brelade have the second and third largest chunk of residents with 13% and 11% respectively.

The smallest parish in terms of population size was St. Mary. 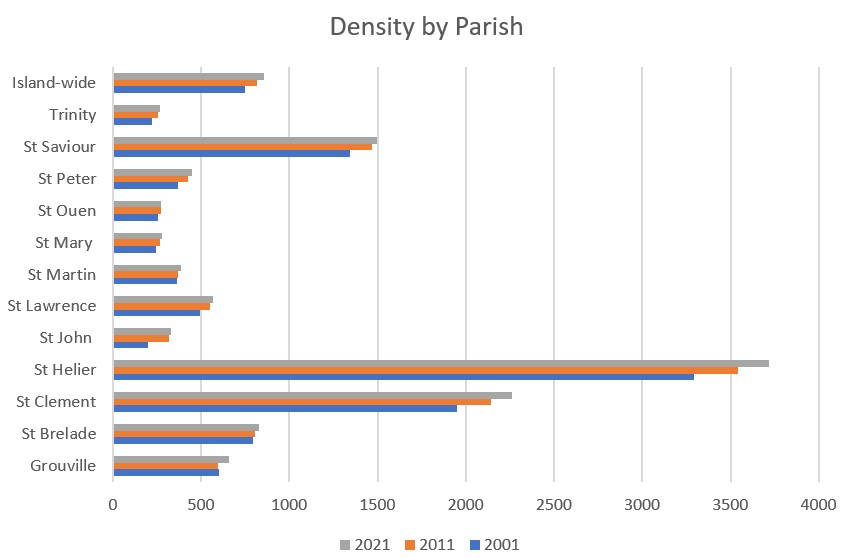 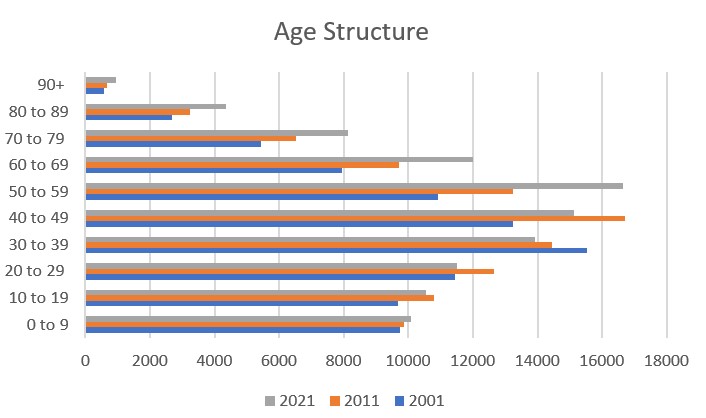 On Census Day, there were 68,055 people of working age according to the OECD definition - aged between 16 and 64 – representing 66% of the population.

This gives a dependency ratio for Jersey (the ratio of those outside of working age to those of working age) of 52%, an increase on the 2011 ration of 46%. This means that for every one person working there is two people not working in the island.

Of the people who reported being born in an ‘other European country’ or ‘elsewhere in the world’, the most frequent country of birth was Romania (1,338), which saw the largest change with 875 more people than in 2011. South Africa and India followed with 934 and 410 respectively. 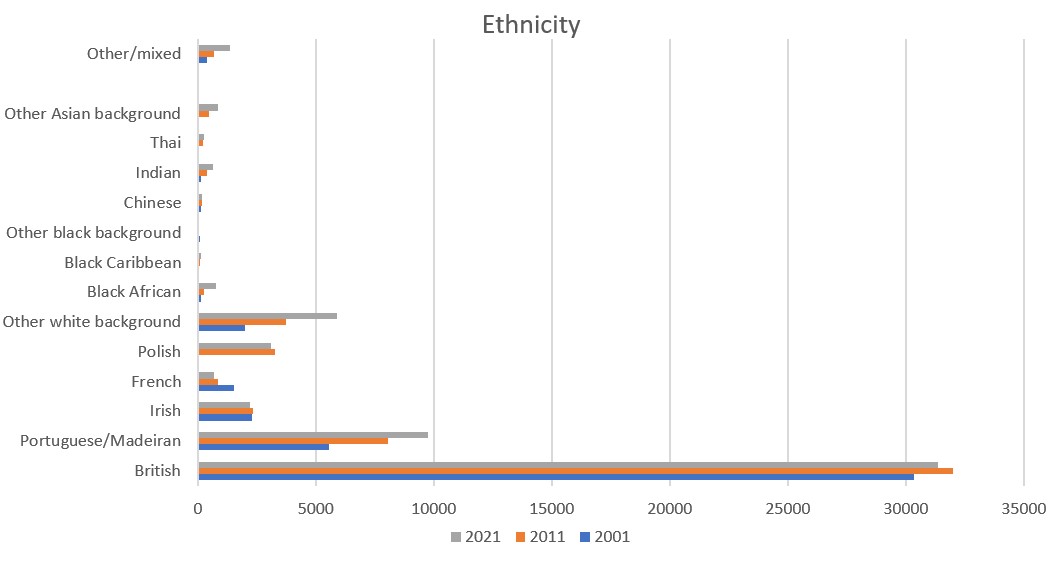 The 2021 Census also asked islanders to identify which ethnic category they felt best described themselves. Fewer than half (44%) of Jersey residents considered their ethnicity to be ‘Jersey’ (45,849) , whilst almost a third (31,354) considered themselves to be ‘British’.

About one in eleven (9%) Jersey residents considered themselves to be Portuguese or Madeiran, representing almost 1,500 more people than those who were born in Portugal or Madeira. 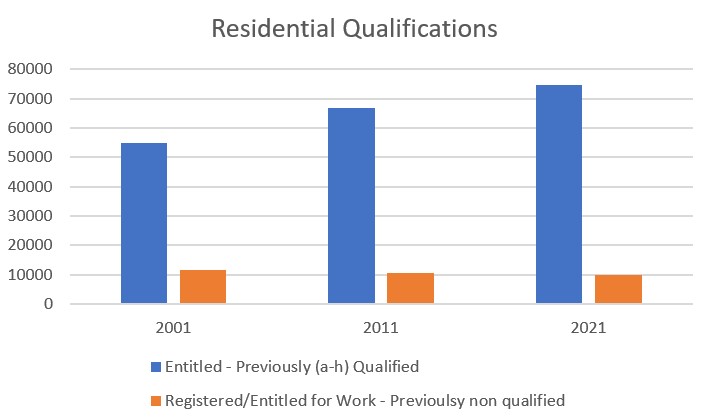 Over four-fifths (86%) of the 86,791 islanders over the age of 16, had Entitled status, meaning they had lived in Jersey for at least 10 years, could buy, lease or sell any property and work for any employer.

A further 2% had Licensed status through being essentially employed.

About 6% of adults were Entitled for work, meaning they had lived in Jersey for five years immediately before their status was granted, were restricted in buying and leasing property but could work for any employer.

Approximately one in twenty adults (5%) had Registered status and therefore did not qualify under any of the other categories.

The largest shift in residential status by place of birth in 2021 compared to 2011 was seen for residents born in Poland. In 2021 the majority (68%) had Entitled status, compared to 4% in 2011 who were “locally qualified”.