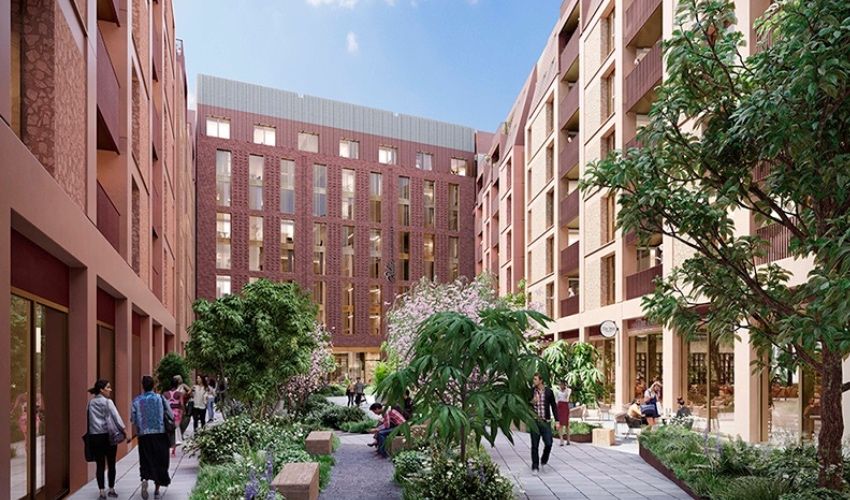 A £120m plan to regenerate two acres of town an apart-hotel, more than 200 homes, restaurants and shops and a walkway and courtyard linking Broad Street and Commercial Street has today been unanimously rejected by the Planning Committee.

Le Masurier, the 187-year-old property company owned by one of Jersey's richest families, the Clarkes, had submitted plans for 'Les Sablons' - a development of 23 flats in three blocks, and a 103-room 'apart-hotel' with ground-floor shops, cafes and restaurants.

If approved, Les Sablons would have covered 31-41 Broad Street and 19-29 Commercial Street and included a landscaped courtyard and access between the two streets.

Ahead of this morning's planning meeting, the Planning Department recommended the project be refused.

Video: Drone footage of the site, and the original vision for the completed Le Sablons development.

Société Jersiaise and the National Trust also came together to oppose it, describing the development as "a banal, anonymous and unimaginative commercial development which could be located anywhere".

Members of the Planning Committee said yesterday that the Broad Street end of the development, which included retaining the facades of two listed buildings, was “bland, uninspiring and a missed opportunity”.

They were also concerned that flats on the Commercial Street side, particularly those lower down, would look out over the old Harbour Wall and would not receive enough sunlight.

Committee Chairman, Trinity Constable Philip Le Sueur, said that he thought the five-storey Broad Street end and the nine-storey Commercial Street end were both too high, even if the top floor of the former was stepped back away from the road.

Others, including Vice-Chairman Deputy Steve Luce and Deputy Andy Howell asked why the planned walkthrough from Broad Street to the central courtyard was not more of a feature.

“I was expecting something exemplary but I find the design of the frontage very disappointing,” said Deputy Luce. “Why do we see a walkway that looks like tunnel at the front? You could make it twice as high and move the unit you would lose above to the rear of the development.”

The Committee also endorsed the recommendation of the assigned Planning Officer, who concluded that the planned development, “by way of its excessive height, would result in visually incongruous development out of keeping with the prevailing scale of built form in this locality”.

The officer also said that the proposed development would “result in unacceptable living conditions for future occupiers by way of inadequate daylight and sunlight.”

These reasons were disputed by the C Le Masurier at Thursday’s Planning Committee meeting, with the firm’s Chief Executive, Brian McCarthy, arguing that Les Sablons would revitalise that part of town, a view echoed by St Helier Constable Simon Crowcroft, who spoke in favour of the plans at the meeting.

The applicant already has permission, granted in 2011 and subsequently updated, to demolish the existing buildings and build a six-storey building comprising retail units and offices.

The company has already started development on this application by commencing demolition.

It initially told Planning that it could fall back on this approved office development, should its Les Sablons plans be refused; however, the firm later confirmed that it was not its present intention to proceed with that scheme.

At the time the plans were launched, Express spoke to Le Masurier Managing Director Brian McCarthy about the vision for Les Sablons and the wider regeneration of St. Helier...