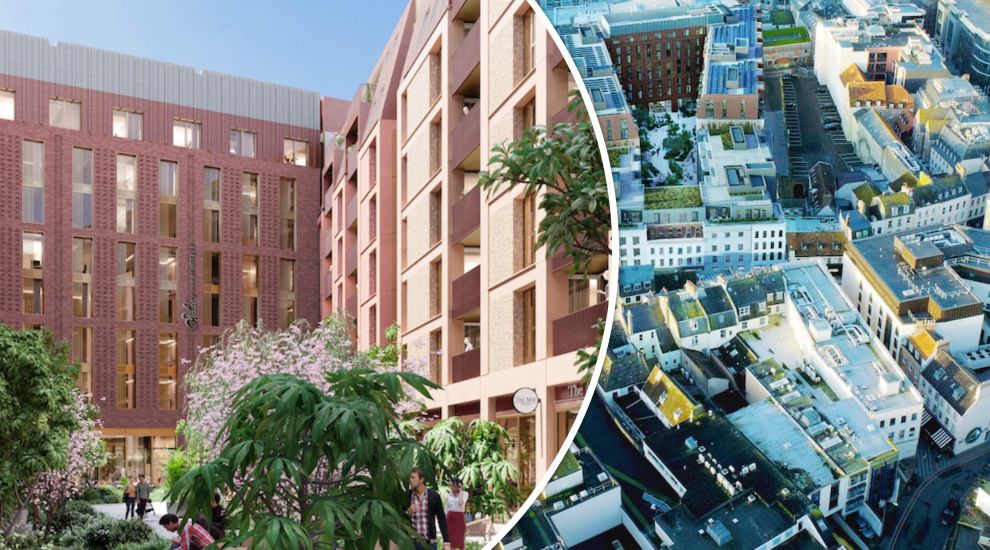 A £120m plan to regenerate two acres of town an apart-hotel, more than 200 homes, restaurants and shops and a walkway and courtyard linking Broad Street and Commercial Street has been unveiled today.

The company behind the plans for 'Les Sablons', Le Masurier, says it expects 25 jobs to be created for the Wilde Aparthotel alone, with more positions created by the new hospitality and retail venues.

After seeking public feedback, Le Masurier is hoping to submit a planning application this month. If planning permission is secured, it's hoped that the revamp will be complete by 2025.

Video: Drone footage of the current site, and the vision for the completed Le Sablons development.

Meaning “the windblown sand”, Les Sablons is named after the harbour wall on Commercial Street which once protected St. Helier from sand blown from the beach, and which will be maintained as an integral part of the planned developments.

Comprising a substantial part of Broad Street, the site had originally been earmarked for a new Government HQ, but the plan fell through when the Government became aware that the developer wanted to add housing.

The tourism-accommodation mix of Les Sablons - which will offer a total of 238 homes and 103 apart-hotel beds - echoes Le Masurier's current project to regenerate Bath Street.

Merchants Square, as the development is known, includes 149 residential apartments and a 122-bedroom Premier Inn hotel.  By way of comparison, at £70m the budget for Merchants Square is close to half that of the new development. 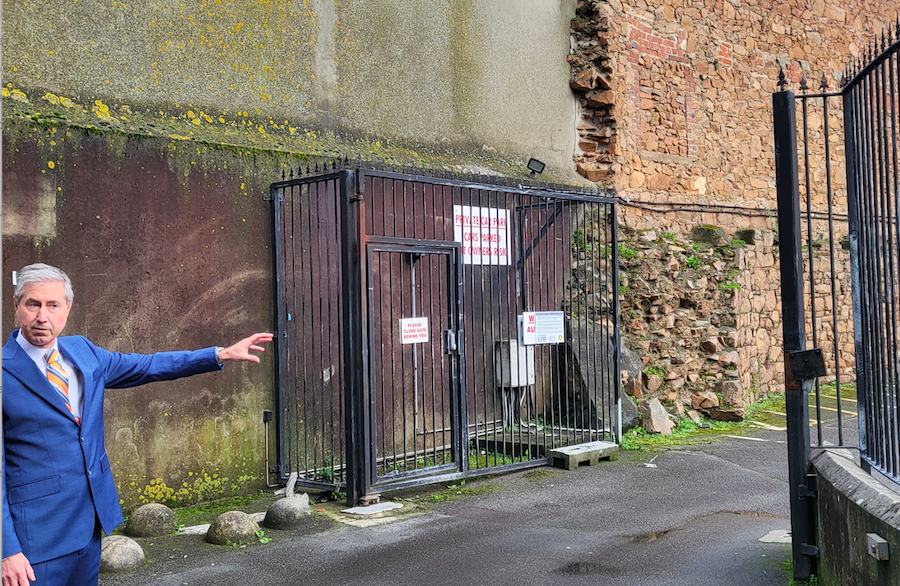 Amanda Burns, CEO of Visit Jersey, was among the first to welcome news of the new development.

“Les Sablons will provide a real boost for tourism, and shows confidence in the sector," she said.

“As we look to promote the growth of Jersey’s tourism industry year-round, accommodation like Les Sablons helps to improve productivity within the visitor economy and will appeal to the needs of our visitors.”

St. Helier's Constable, Simon Crowcroft, said he welcomed Le Masurier's proposals “to continue their commitment to the town of St Helier and the Island’s tourism industry."

“The proposed hospitality venues will add to the rich and varied offer already provided by the town for all islanders,” he said.

“It is also to be hoped that the development will lead to further improvements in the public realm of Broad Street and Charing Cross.”

Express takes a closer look at the plans...

At the heart of the proposed development is a 103 bedroom/suite Wilde Aparthotel by Staycity, which specialises in self-catered lettings.

Pictured: "Aparthotels", such as the proposed Staycity offering, bridge the gap between traditional tourist accommodation and self-catered lettings.

The hotel is projected to accommodate 17,000 overnight stays per year, with visitors spending estimated to bring £8.9m in to the local economy.

Referring to a report from 2019 that identified how 7000 new homes would be needed by 2030 to accommodate Jersey’s growing population, Le Masurier said its new development would include  238 one-, two-, and three-bedroom apartments, which it said would be designed with first-time buyers in mind.

It was emphasised that the flats were built on “brownfield” site rather than taking away from Jersey’s countryside.

A vibrant place for leisure

Le Masurier said its desire is to transform the “run-down area” comprising Broad Street and Commercial Street into “a vibrant place to visit, stay, eat, drink and shop”. 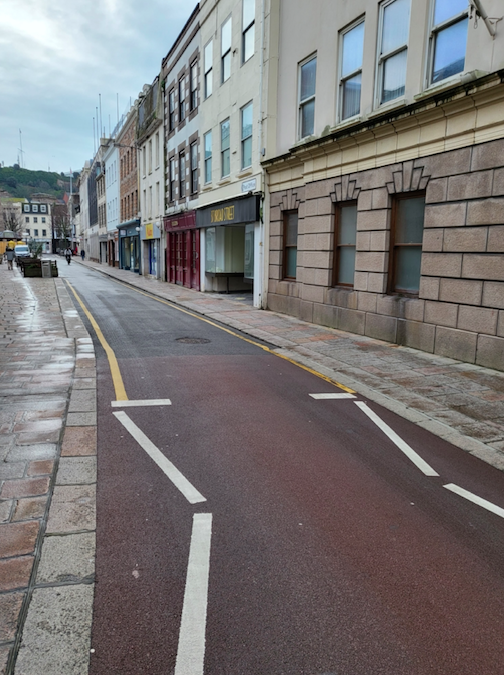 Pictured: Broad Street, which was described in its current state as "run-down" would be connected to Commercial Street through a walkway as part of "transformative" works.

Describing it as a “destination development”, Le Masurier said Les Sablons will include retail businesses across the site as well as bars and restaurants.

There are also plans for performance and gallery areas to reinforce its reimagining as a “central community and socialising space."

The development of Le Sablons would require the hire of 120 full-time construction employees while the works are carried out. 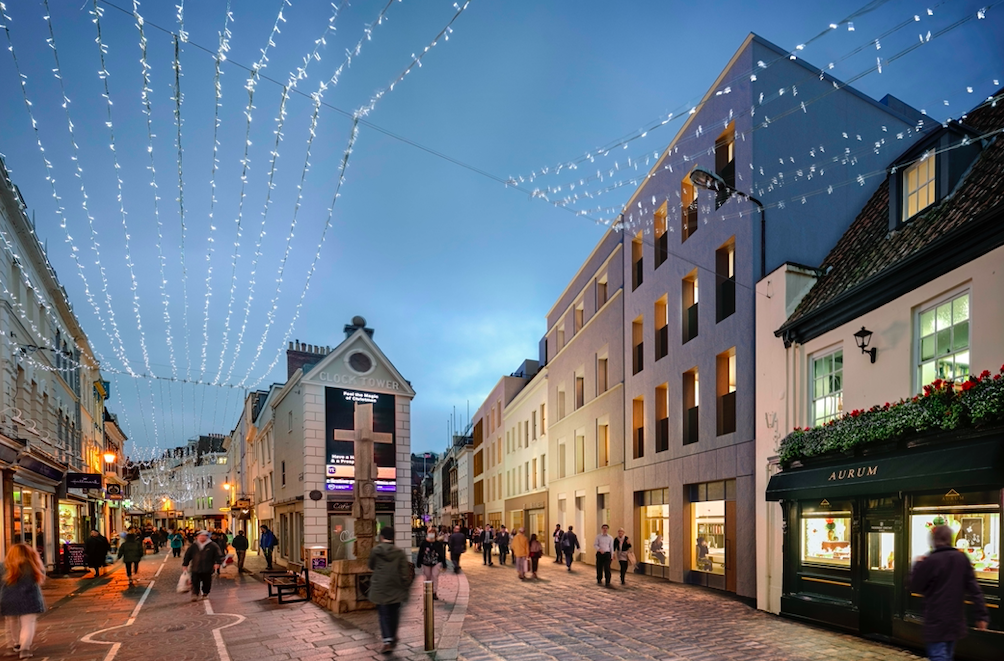 Pictured: A vision of what Broad Street might look like after the development is completed, with new businesses creating new jobs.

25 permanent jobs would be required for the operation of the Wilde Aparthotel, with more positions created by the new restaurants, bars and retail offerings.

A new walkway and courtyard linking Broad Street to Commercial Street were described as integral to the plans. 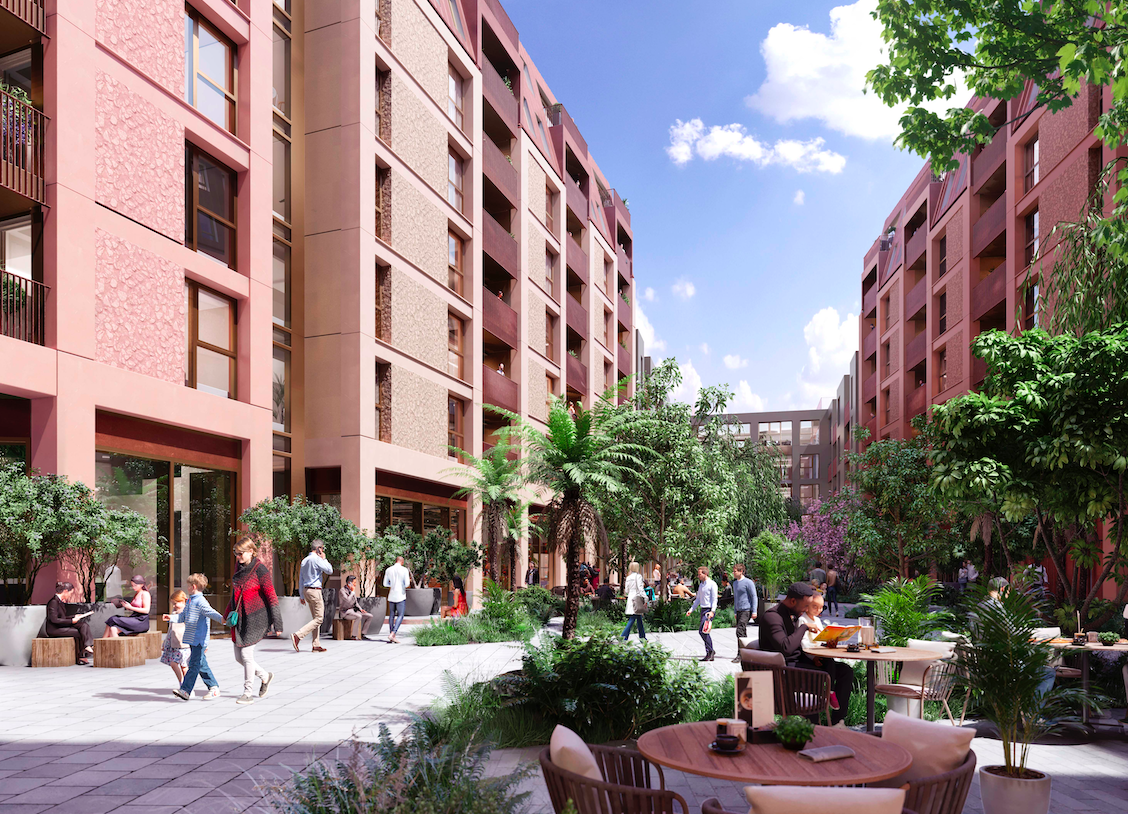 Pictured: An mock-up of the courtyard view from Commercial Street facing towards Broad Street.

Emily Allchurch has been commissioned to create an art installation which will be displayed at one of the entrances to the site. 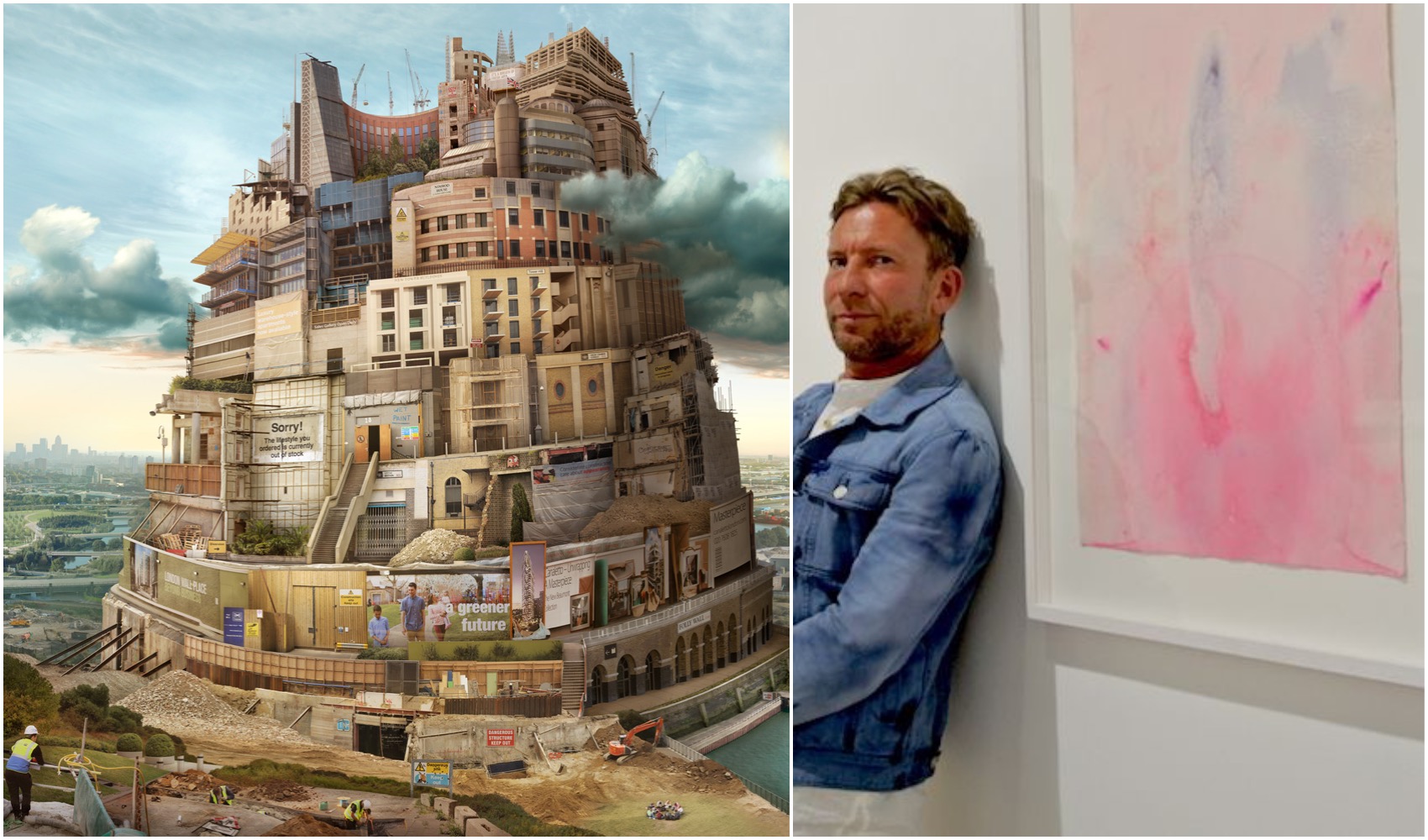 Jason Martin, who has previously presented work at the Peggy Guggenheim Collection in Venice, will create a pair of sculptures to mark the other side.

Le Masurier says that sustainability is “central to the development and the surrounding environment”. Plans were said to have been made with the consideration “physical, natural, social, economical and human capital”.

A reduction in energy use and a focus on electrical power aims to anticipate and overdeliver on carbon targets set out in the upcoming Bridging Island Plan. “Efficient systems”, such as rainwater harvesting, will also be implemented to save resources, the developer said. 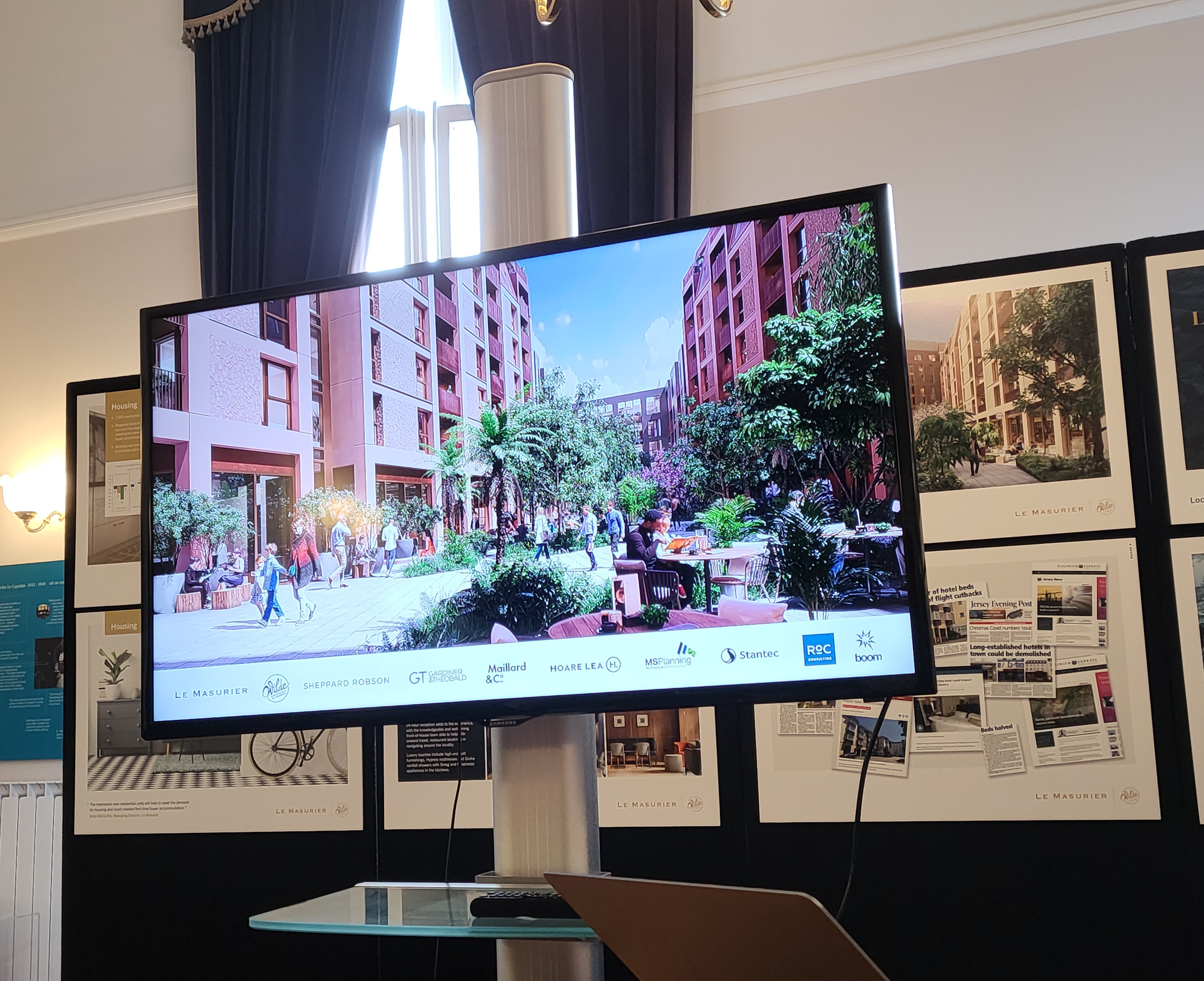 Pictured: Public consultations for the Le Sablons development will be held at the St Helier Town Hall until Saturday morning.

Planning permission for Le Sablons is due to be submitted by the end of March.

If permission is granted, the works are planned to commence during the first quarter of 2023 with completion estimated for the end of 2025.

Express spoke to Le Masurier Managing Director Brian McCarthy about the vision for Les Sablons and the wider regeneration of St. Helier...

Moving on with Les Sablons. Will St. Helier get £120m investment?

Posted by Keith Marsh on Mar 3rd, 2022
As we have already ruined the seafront, we might as well ruin the town centre.
Posted by Michael Tostevin on Mar 3rd, 2022
Now we all know the truth as to why Broad Street has remained closed for so long....
Posted by Richard Lock on Mar 4th, 2022
Is it not amazing that Le Masuriers are able to undertake such a massive scheme for just £120 million whereas the new hospital will be costing us £850 million ? Our Government needs to produce a cost breakdown ( validated bill of quantities ) in accordance with Royal Institution of Chartered Surveyors regulations immediately.
Posted by Scott Mills on Mar 4th, 2022
wow how very original...more restaurants and cafes....just what we need. We are quite short on them at the moment.
Posted by Isabel Jeune on Mar 17th, 2022
I'm still wondering who on earth would want to live in that built up area of town. Keith Marsh has hit the nail on the head.
To place a comment please login Login »