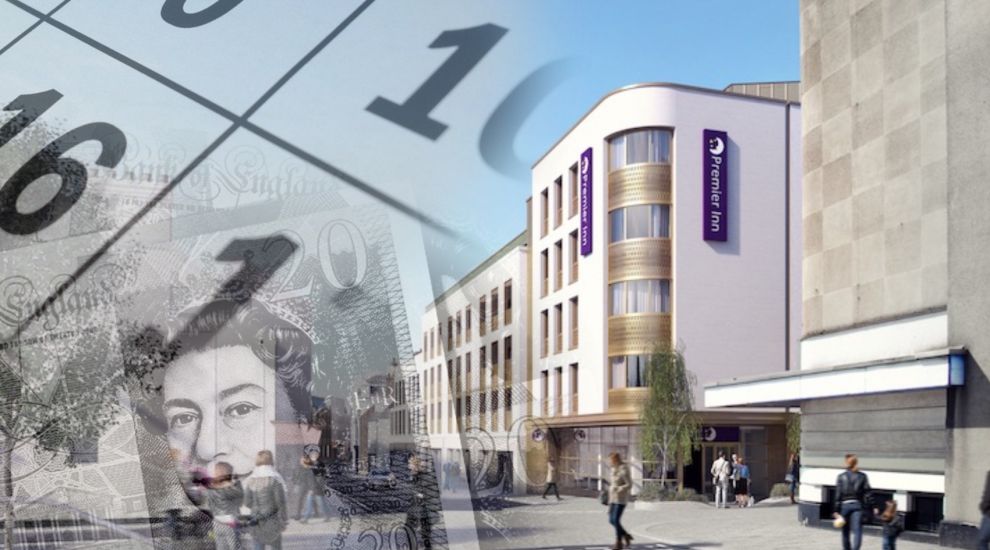 A major scheme to regenerate Bath Street with a new Premier Inn is facing a delay of four months, which could lose the local economy up to £500,000 in visitor spending, after it was hit by a fresh planning challenge.

Le Masurier began advancing the £70m plans, which also include 145 units of one and two-bed housing and a restaurant, following their approval by the Planning Committee in October.

But the developers announced that a third-party planning appeal - which can only be submitted by those residing on, or with interest in, land within 50 metres of the proposed development - had been filed against the scheme yesterday.

Pictured: The planning appeal largely focuses on heritage concerns and the development's impact on Rue de Funchal, which runs behind the proposed location of the Premier Inn. (Google Maps)

He argued that the development was "overbearing" and could cause "significant loss of light" to nearby properties, which, he claimed, runs contrary to the Island Plan and North of Town Masterplan. Mr Sutton further raised concerns over the traffic implications of making Rue de Funchal a two-way street under the plans.

Turning to heritage, the appellant argued that the Planning Department and Planning Committee "failed to give sufficient weight to the value of the buildings around the site (the 'heritage assets'), including Number 9 Rue de Funchal, which is a listed Grade 4 building and winner of a Jersey Design Award.

He also accused the Planning Department and Committee of giving insufficient consideration to the Principal Planner of Historic Environment's "strong and sustained objection" to the development and a requirement in the 'Design Guidance for St. Helier' document, which includes the requirement that new developments should be sensitive to their surroundings.

An independent planning inspector will now be appointed, to whom both parties must make their arguments either in writing or during a hearing. The inspector will then make a recommendation in a report to the Minister for the Environment, who makes the ultimate decision on the appeal.

He commented: “The third-party appeal that has been made against our planning consent is not in the best interests of St Helier of our island. I am extremely frustrated by the appeal that will delay the project for at least four months and comes at a cost to the taxpayer in order to bring in a planning inspector from the UK.

"Four months of delay will mean that 13,000 overnight stays are lost, over £0.5m of visitor spending will be lost, local people will have to wait even longer for much needed housing and an area crying out for regeneration remains stagnant, when we are geared up and ready to deliver as promised."

He further argued that the scheme, which it's claimed will support 30 new jobs in tourism and create 70 in the construction industry, had already been recognised by the Planning Committee for "very tangible benefits that it will bring to tourism, housing, employment, regeneration and investment".

Mr McCarthy continued: "It has also gained enormous support from the general public as well as local businesses and organisations alike.

"Since the public consultation, social media was extremely active with hundreds of positive comments being fully supportive and backing the redevelopment. At the recent Planning Committee meeting, many local businesses and organisations also spoke out in support."

It's the third major hurdle for the 122-bed hotel complex, which was developed with support from the Constable of St. Helier and is accompanied by plans for a new green lane linking Millennium Town Park with the Library.

Pictured: The regency building heritage campaigners had hoped to protect.

In September, campaigners from Save Jersey's Heritage put forward an "alternative strategy" for the development in a bid to avoid the demolition of a listed regency townhouse.

Le Masurier declined, arguing that the scheme's wider economic benefits outweighed arguments to retain a single, derelict building, but added that it would "carefully remove and salvage" listed features where possible.

Heritage concerns then reappeared one month later as the Planning Committee considered whether to approve the development.

Amongst the objectors were former Deputy and Chairman of the Planning Committee and founder of ‘Save Jersey’s Heritage’ Alastair Layzell.

Historic Environment Officer Tracey Ingle also offered her team’s “strong and sustained objection” to the plans given the impact on the Regency townhouse and other nearby listed buildings.

Pictured: The alternative plans put forward by Save Jersey's Heritage.

The plans were, however, supported in equally vigorous measure by representatives from the Chamber of Commerce, Jersey Business, the Freedom Church, the 'Cog and Sprocket' bike shop in front of the Regency building, and the nearby Daily Globe bar.

Ultimately the application was passed with three votes – Constable Philip Le Sueur and Deputies Rowland Huelin and Graham Truscott – and the panel’s Chairman Deputy Labey voted against the proposals.

Posted by Philip Hudson on Nov 29th, 2019
This is a shockingly, old, tired, unpleasant area of St. Helier. Run-down and in need of a development like this, it would benefit the whole area and St. Helier.
An element of society always blocks progress, they do not find change easy.
It would be a shame if this change did not happen and a big loss to Jersey's capital "St. Helier".
Posted by B De Gruchy on Nov 29th, 2019
Good, town is becoming walled in by large buildings without enough open spaces. Also, The Premier Inn is going to take business away from locally owned hotels and guesthouses.
To place a comment please login Login »