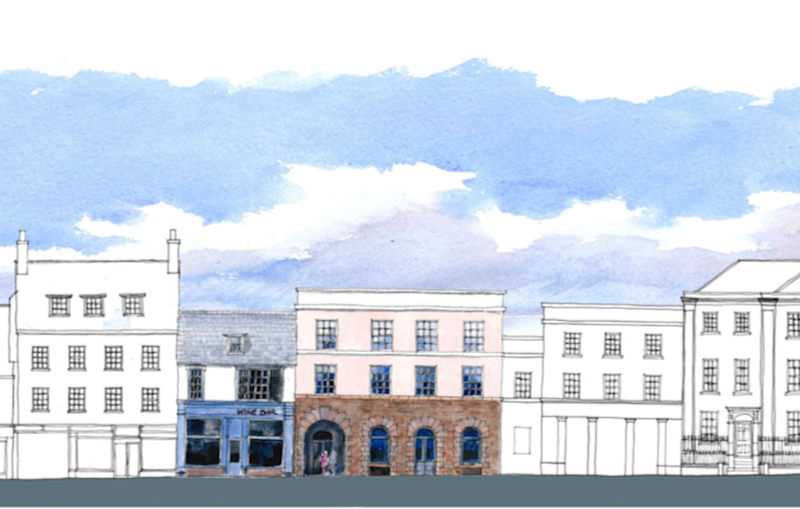 Heritage campaigners have put forward an "alternative strategy" for the £70m proposed new Premier Inn development in a bid to avoid the demolition of a listed Regency townhouse.

Earlier this year, developers unveiled multi-million plans to regenerate two acres of dilapidated land in the north of town with a new 122-room Premier Inn, a complex of 145 apartments, and a new restaurant, bar and shops.

The plans received resounding support from Visit Jersey, but came under heavy criticism from conservationists, mainly because of their impact on an 1830s townhouse which Save Jersey's Heritage President Marcus Binney says "illustrates the development of the town and architectural fashion in St. Helier”.

Motivated by a desire to save the two Regency era buildings that fall within the development area, Mr Binney has come up with an "alternative strategy" (pictured top) that he says would allow the building of a new Premier Inn whilst retaining the street’s historic buildings. 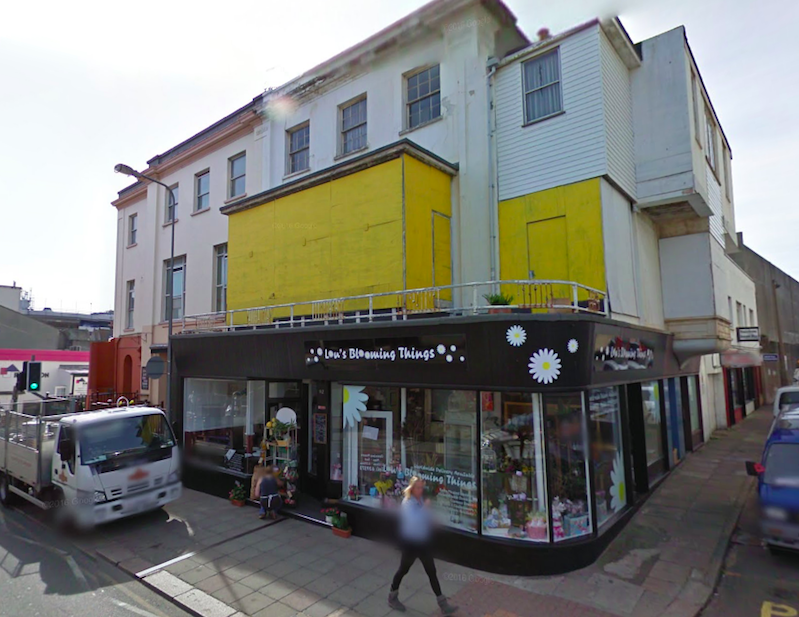 Pictured: The Regency building conservationists do not want to see demolished sits at 92 Bath Street.

"When we oppose a development of this type –whose design and massing we think is totally inappropriate for Jersey - we try to come up with an alternative. The Le Masurier scheme promotes ‘Hotel not Heritage.’ Our strategy promotes ‘Hotel and Heritage.’"

His plan is to rotate the five-storey block hotel plan by 90 degrees and situate the Premier Inn in the centre of the site behind the retained and repaired listed buildings: "Keeping the listed buildings would allow the hotel to use the grand reception rooms for commercial purposes – in the same way as Premier Inn does on many of its sites in the UK."

He does, however, acknowledge that his plan is just a strategy, not a design, and that it represents what is "possible" for the site. 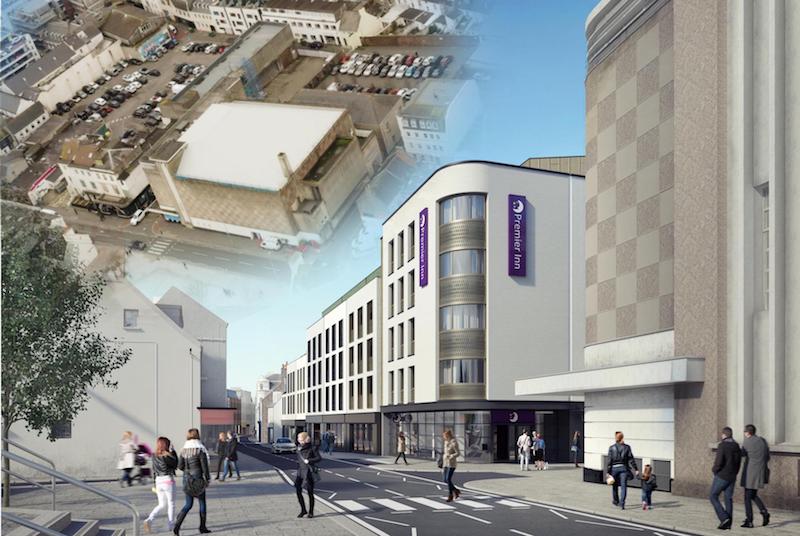 Pictured: What the proposed development, which sits next to the former Odeon cinema, will look like, if approved.

Brian McCarthy, Managing Director of Le Masurier, has said in response to previous complaints by heritage groups that the developer had already undertaken a considerable amount of work to try to accommodate the listed building in in the overall plans. However, he said it would not be commercially viable and would risk Premier Inn ‘walking away’ from the project.

Responding to Le Masurier's planning application, Mr Binney dismissed what he perceived to be "opportunistic over-development".

"The current proposals squander the potential to contribute to the townscape and the civic realm and to deliver benefits for the economy and community of St Helier," wrote Mr Binney.

"The Application Scheme took two early development decisions which were deeply inappropriate. These were to demolish the listed buildings in Bath Street and to copy the massing of the Odeon cinema (which is 5- 6 residential stories high) and build close-up to it. 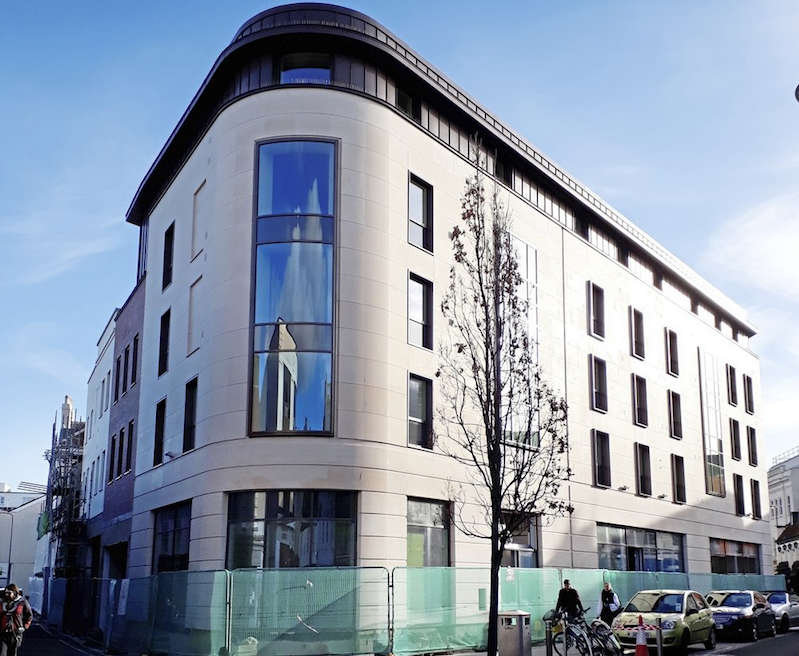 Pictured: Save Jersey's Heritage believe the conversion of the Hue Street cottages and the restoration of the Pitt Street buildings which adjoin St Helier’s first Premier Inn are proof that a similar approach could be taken in Bath Street.

"The cinema’s height has been used to legitimise equivalent-height new buildings directly opposite its entrance and across most of the site to the south. The same height increase has been applied to the three public facades of the site - in contravention of planning guidance.

"In our view, the redevelopment team’s lack of respect for planning guidance and long- established principles of conservation, urban design, and place-making provide clear grounds for refusal of this application."

FOCUS: "My vision is to create a new community"

Posted by William Boyd on Sep 12th, 2019
Yeah, that existing town house structure sure is impressive and worthy of saving thereby risking a much needed revamp of that part of town. Are the conservationists going to pick up the tab for any extra costs involved? Thought not, that will be down to the people trying to improve this dreary part of St Helier ie the developers. Sometimes one just wants to go and lie down in a dark room.
Posted by ColinFoster74 on Sep 12th, 2019
The proposed development is very much needed in this part of town & if this development is held up in any way because of the eyesore that heritage call a special building then shame on them .
This development is going to improve the whole area immensely, it is going to help Tourism which will help our Economy & put more people in jobs which will bring down unemployment , so why now ? , why have Heritage waited so long ?, This building has been boarded up since the 1990s why did you not try & do something about this special building then ? .
Bath Street needs this development so let Le Masuriers get on with it .
Posted by Sheila Young on Sep 13th, 2019
Demolish the Odeon building as well it is an eyesore.
Posted by DavidLe Quesne21 on Sep 13th, 2019
Absolute joke the alternative proposal, the whole area is a shambles. Particularly after the insane listing of the Odeon cinema which in all honesty can only be described as an eyesore.
Now there is the potential of a £70 million privately funded development, which will provide jobs and bolster the number of available bed nights which over the past decades have dwindled to around 10,000 where once we had in excess of 30,000.
We require visitors to sustain our Air and Sea links to UK and France.
The heritage brigade describe this as Regency buildings, it is not Cheltenhan nor Bath nor Royal Leamington Spa.
The building is ramshackled and has been for 20 plus years.
Time to move on and allow the project to go ahead as planned with a modern purpose built hotel which will be energy efficient and a welcome boost to our ailing tourist industry.
Plus this end of Town is crying out for an uplift exactly as CLe Masurier are proposing to invest heavily in.
Posted by nigel pearce on Sep 13th, 2019
It is a pity that the former Odeon Cinema building can no longer be incorporated into these plans.
Perhaps the sect that now own it could be offered an exchange building so that it could be. There are several old churches that could provide them with a home. maybe Cyril Le Marquand House would suit them now that States' departments have been moved to expensive rented offices.
To place a comment please login Login »