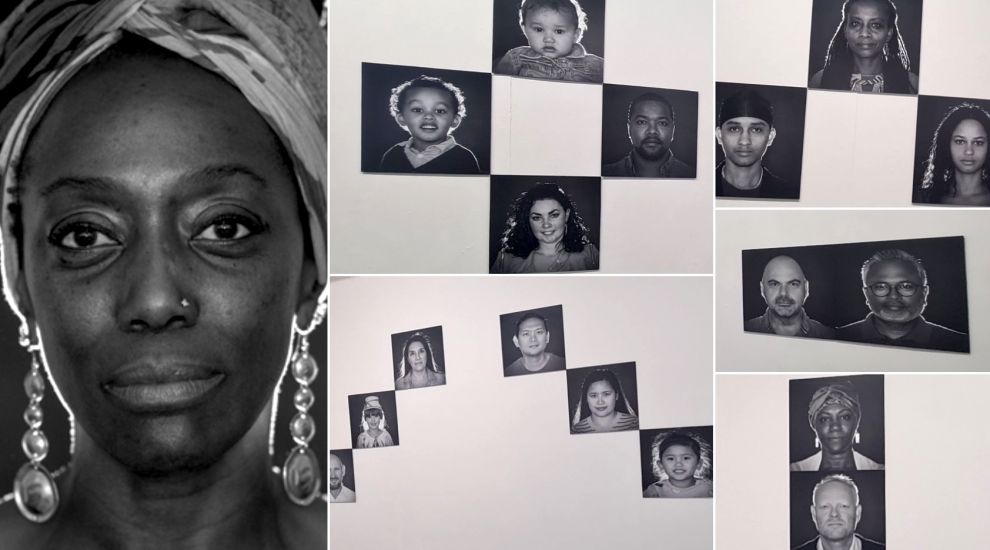 Islanders have had their portrait captured and shared their family history for a new exhibition celebrating the "melting pot" that is Jersey.

A series of black-and-white portraits is currently on display at the Berni Gallery at Jersey Arts Centre to celebratethe diversity within families.

The exhibition was the brainchild of Devorah Morris-Monro, a coordinator of Black Lives Matter, mental health and well-being initiatives as well as a founding member of the Inclusion Advisory Panel, a panel member of the Government's BAME network and a Family Liaison Officer in Education. As a committee member at Jersey Arts Centre, when Devorah heard of plans for a Black Lives Matter-themed Human Rights Films festival, she started thinking about an exhibition to accompany the films.

While her initial plan was to engage black and mixed men and women from all walks of life, to help empower positive role models for the next generation, Devorah soon decided to open the exhibition up to show diversity within families.

“I called on a few people I knew and then decided to open it up and see how diverse families are,” she explained. 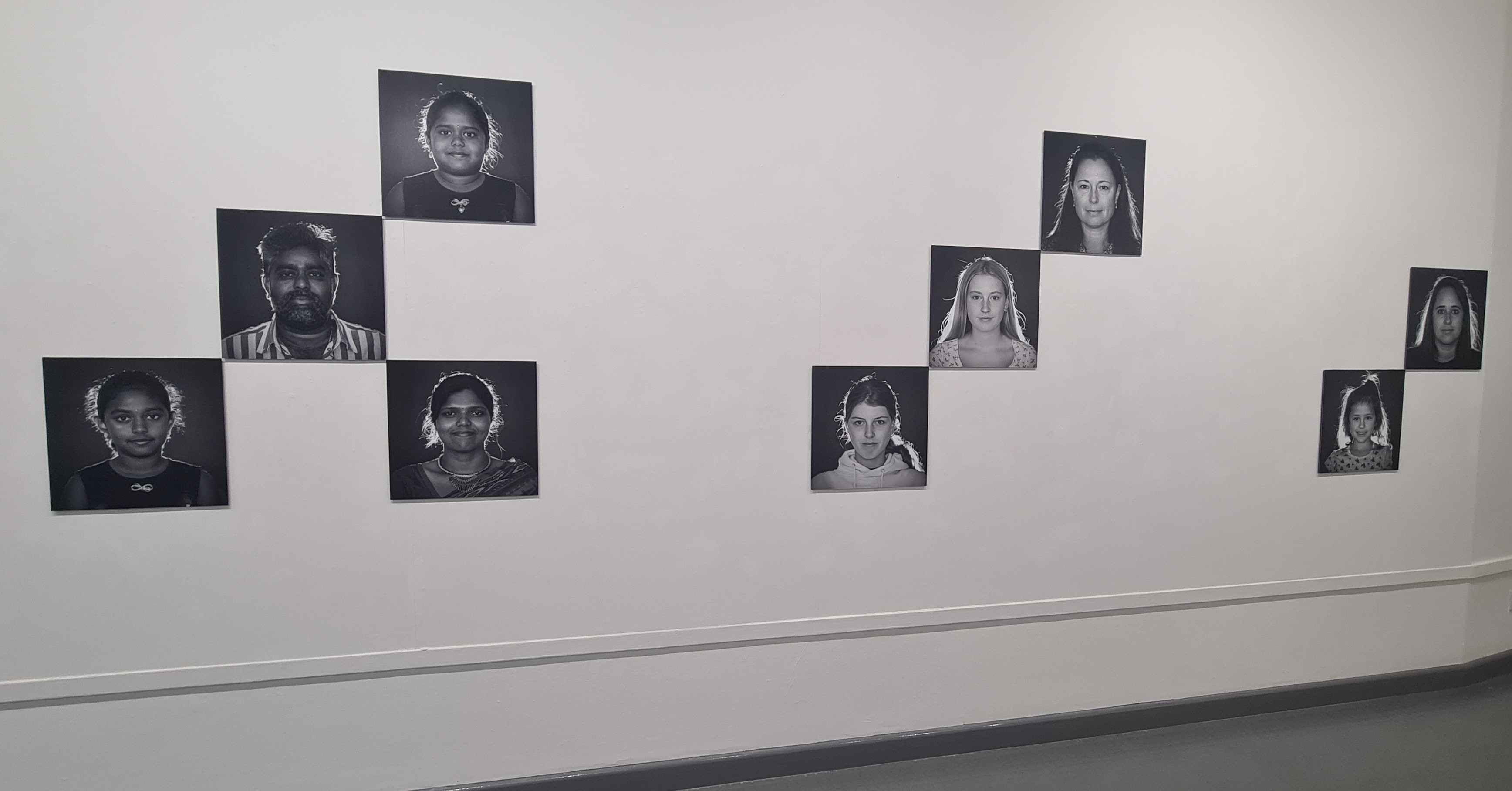 CLICK TO ENLARGE: 25 islanders took part in the exhibition.

Devorah worked with Exhibitions Coordinator and photographer Wayne Stewart to bring ‘Family’ to the Berni Gallery. The result is an assembly of faces and stories from families across the island, sharing their narrative on being a bridge between nationalities.

“For me, it’s just to show that diversity is everywhere,” Devorah said.

“It just shows that we are a big melting pot. What I wanted to show is that we are inclusive, diversity is within families. It makes this place all the richer for it.”

She explained that she hopes the show will help people living locally recognise that Jersey is a diverse island and encourage them to think about inclusion.

“I think for a long time there has been exclusion,” she said. “Now we are thinking inclusion is happening by making a big deal out of it but it should just be happening. To get rid of the prejudice that’s a different matter because that’s an unconscious bias.”

“It’s almost an emotional war with intellectual weapons,” she added. “When you come from a diverse background, there are a lot of emotions and things people go through when they come to the island.

“It’s quite an emotional thing to leave your family. Whatever experience you go through, either through the travels or having English as an additional language, it brings a bit of trauma. If you have not been through it, you will not be able to understand it. You try and explain it with intellect but it’s not an intellectual thing.”

As part of the Arts Centre’s Human Rights Festival, ‘The Last Black Man in San Francisco’ will be screened tonight at 19:00.

If you've walked, driven or cycled past Fisherman's Quay recently, you may have been greeted by a new guardian of the area...

You can see the creation next to Jenna Dee Scallops. 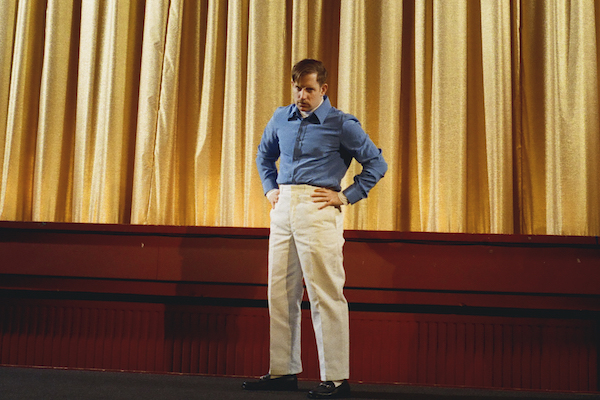 'Welcome To the Rhumba Club' is musician Tom Falle's tribute to the misfits who crave a space outside conventional 'coolness'.

Kicking off the record with brass fanfare is Tom's most recent single, ‘Primitive’, which he describes as is very much an “I have arrived moment”.

Listeners might also recognise some famous voices on the album - Abbie Ozard, Jack Flanagan of the Mystery Jets and Senab Adekunle (aka Jessie Ware) all feature. 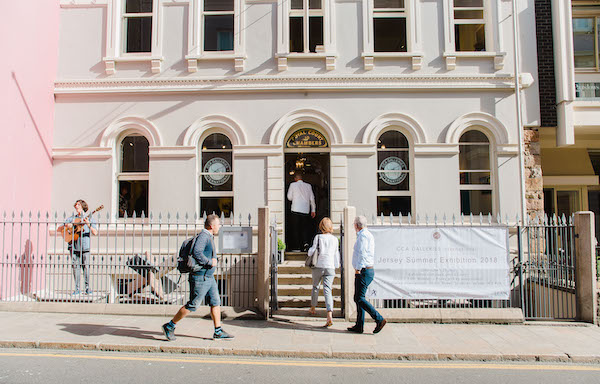 Pictured: “British Abstract: From St Andrews to St Ives” can be seen until the New Year at CCA Galleries International.

After starting in separate parts of the country, all three gravitated to St. Ives, crossing paths and working alongside other members of the prolific artistic movement taking place there at the time.

The group of painters now known as the St. Ives School began to form only after the end of the war, with the likes of Peter Lanyon, Terry Frost, Barbara Hepworth and Ben Nicholson all living or staying frequently in St. Ives.

The St. Ives School forms an important period of British art history and the careers of those artists involved have left a lasting impression on the art world of today.

“British Abstract: From St Andrews to St Ives” can be seen until the New Year.

ArtsCentreTheatre will be returning to Jersey Arts Centre’s stage with a brand new double-bill of original one act comedies from Wednesday 17 November.

Written and directed by Jason Kenyon, Fruit Basket focuses on the Society of Amateur Dramatics - known to one and all as SAD.

'If It’s Not In The Minutes...' promises to reveal what really goes on behind closed doors when an amateur theatrical club’s officials gather to discuss its past and plan its future.

Meanwhile, ‘The Show’s Not Over Till The Fat Lady Bows!’ shows how the final dress rehearsal of the club’s latest show is plunged into chaos when the director decides their artistic vision will take precedence over theatrical tradition and calmly announces that there will be no curtain call.

Meet the author behind a Jersey romance

Between 20:00 and 21:00 on Thursday, islanders will be able to join author Sophie Cousens at the Library for a talk about her novel, 'Just Haven't Met You Yet', a romance story set in Jersey.

Sophie will discuss writing the book, why she chose Jersey as the setting and more. Time permitting, she will also be able to answer questions and sign any purchased copies of the book.

The meetings are free to attend and there is no commitment expected beyond each month's scheduled meeting so people can attend whenever they can.
This month’s meetings will take place on 17 and 18 November and the books discussed will be Booker Prize winners, who are currently featured in a display in the library's foyer.

Around 7,600 people took the time to visit the Skipton Big Ideas takeover at the Town Church, which has now closed.

Held over three weeks, the £175,000 project guided by public-backed ArtHouse Jersey was the culmination of two years of work.

More than 100 creatives ranging from designers to architects and performers got involved, and clients from charities Enable, Mencap, Brighter Futures, Autism Jersey and Eye Can also got involved in creating work.

The Big Ideas programme also included a number of workshops, and two events - a 'Walking Gallery' of sustainable fashion and a 'Sound of Colour' light and music performance - which sold out.

If you didn't manage to make the exhibition, you can find out more about it HERE.