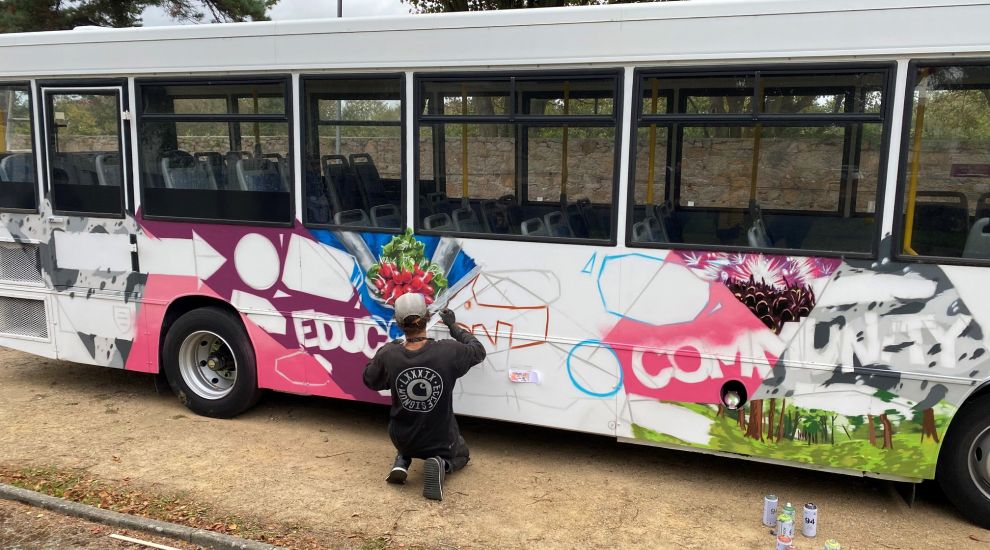 Two local graffitists have been helping young people drive forward conversations about politics and democracy with the help of spray paint...and a bus.

The future of Jersey on a bus...

This week saw Jersey celebrate its first ever Democracy Week, which aimed to give islanders the opportunity to learn about and engage with local politics.

A series of events took place this week to coincide with the anniversary of the Corn Riots, when hundreds of Islanders marched on the Royal Court to demand change.

Two years later, the Code of 1771 was adopted, whereby the States Assembly became the only law-making body in Jersey. This was the first codification of the Island’s laws, part of which is still in force today.

As part of Democracy Week, local street artists Ben Robertson and James Carter of Midnight Industries were asked to illustrate the views of Highlands College students on what the future of Jersey should look like on a bus donated by Liberty Bus.

The process, which several students took part in, was shared live on the States Assembly’s Facebook page. Here's the latest update...

'Zen Jenga' pops up at the Barracks...

Local printing pair, Tim Le Breuilly and Tom Parker, will be presenting some of their work alongside Anna Shipley and Oliver Le Gresley at the Greve de Lecq Barracks Saturday and Sunday between 10:00 and 17:00 as part of an ArtHouse Jersey Pop Up series.

Titled ‘Zen Jenga’ the exhibition was inspired by a Japanese tradition. For over 1,300 years, locals have been tearing down the Ise Jingu grand shrine in Mie Prefecture only to rebuild it anew.

The process of rebuilding the wooden structure every couple of decades not only helps to keep traditional crafts alive but also reflects upon ideas of impermanence and process within nature.

All four artists are part of the creative hub at the Barracks: Tim and Tom installed their Luddite Press, of which Anna is a member, in the quartermater’s store there while Olivier has his own studio.

“We all look to each other’s work, we bounce ideas off each other,” Tim said. “In all of our work, there is an idea of surrendering to the process. We are all working on quite a craft-based way.

“Pulling down the temple and building it back up is something that we are touching upon in our way, it’s about preserving a traditional craft.”

The doors to Luddite Press will also be open to the public all weekend with the artists present to answer questions about the press and the printing process.

Hamptonne tours for the ‘silver’ heads...

Jersey Heritage is marking Silver Sunday – a national day for celebrating older people -  this weekend (4 October) with special guided tours of Hamptonne Country Life Museum for islanders aged 65-plus. Places must be booked in advance (by emailing lucy.layton@jerseyheritage.org or calling 633305) and usual entry charges apply.

Jersey Heritage Members can bring a friend for free on one of the tours.

Artists with ideas of how to creatively transcend covid-19 restrictions are invited to contact ArtHouse Jersey.

The charity is looking to commission an artist or collective of artists to create a piece of work, in any discipline, that will still be able reach a broad audience during the pandemic.

The chosen commission could be presented digitally o​r at one of the studios at the Greve de Lecq Barracks site, with a maximum of 40 people attending at any one time.

A budget of £500 to £5,000 is available for the commission, depending on the proposal, and should be inclusive of all creation, production and delivery costs. The artwork will have to be delivered between November 2020 and March 2021.