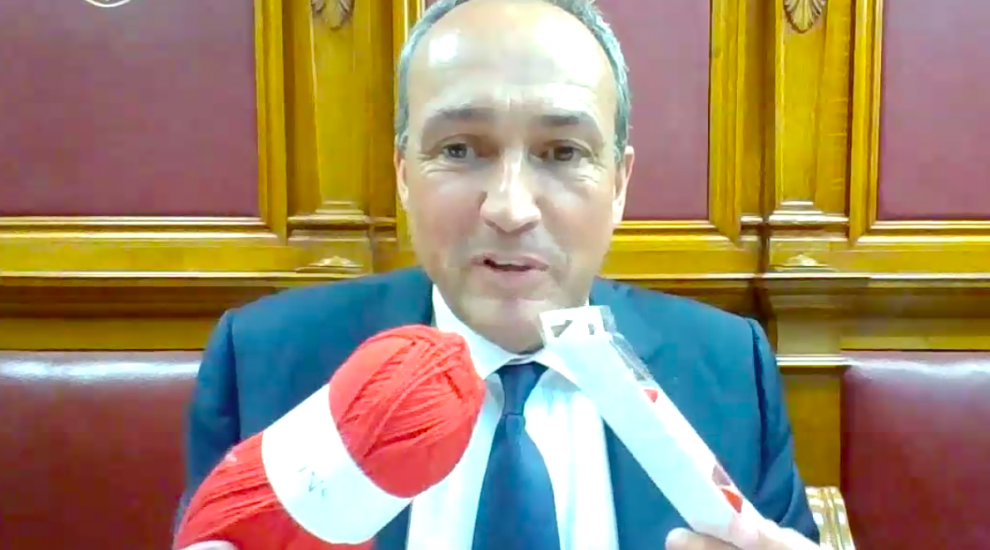 It might have been perhaps the most important States Assembly debate of a generation – but it certainly wasn’t without its more bizarre moments.

This week, States Members gathered to debate whether the Government should be able to borrow £800m to build a new hospital at Overdale.

Having escaped a bid to cap spending at £550m by two votes, the Government's £800m borrowing plan was approved 32-14.

Throughout, there was talk of debt markets, productivity and inflation – all the thinking one might (and should) expect to find surrounding a decision that may hit

But there was also, as has become a tradition of the States Assembly for better or worse (worse), a hearty helping of odd occurrences.

While States Members have been sitting virtually for more than a year now, the trials and tribulations of Microsoft Teams were still apparent…

Senator Sarah Ferguson: Somebody’s got their microphone on. Will they please turn it off?

Bailiff: I’m sorry Senator, we can’t hear anything other than you speaking.

Senator Ferguson: I can hear somebody spluttering in the background. Oh well.

Senator Ferguson: There it is again!

Assistant Treasury Minister Deputy Lindsay Ash: “If Manchester City football club took to the field wearing deep-sea divers’ boots, they would not win the Premier League, they wouldn’t even win against the Jersey Bulls.”

An offer you can refuse

So keen to get the plan through, Home Affairs Minister and leader of the Jersey Alliance Party Deputy Gregory Guida offered Reform Jersey a "trade".

He said that if the party voted against the £550m cap amendment and in favour of the Government’s borrowing plan, he would not stand in the next election.

He said that this would mean they would have not only defeated their “fiercest enemy” but the leader of the “largest party in Jersey”.

Deputy Guida will be standing for election next year, it can be confirmed.

Deputy Monty Tadier attempted to “dismantle” the Government’s argument that capping the cost of the project at £550m would effectively cancel the idea of a new hospital – something many referred to as “gun to the head” tactics – with the help of Monty Python.

“What I would say is that first of all when dealing with an assailant with a weapon, you have to disarm the assailant. Luckily, what we have with the Council of Ministers isn’t a gun to the head, it’s actually just a banana in a sock, which they’re pointing at us.

He continued: “What we realise here is that we don’t have a gun to the head at all, we have a banana, and that the banana can do us no harm because in fact the gun to the head is saying there will be delay… but of course that’s not true. There won’t be delays over this.”

In an unusual turn of events, leader of the hospital project Senator Lyndon Yarn-ham started his speech by telling the Assembly that he had learnt over lunchtime that Reform Jersey’s Deputy Rob Ward’s family had introduced him to crochet because it keeps him quiet... before producing a red yarn and gifting it to him. 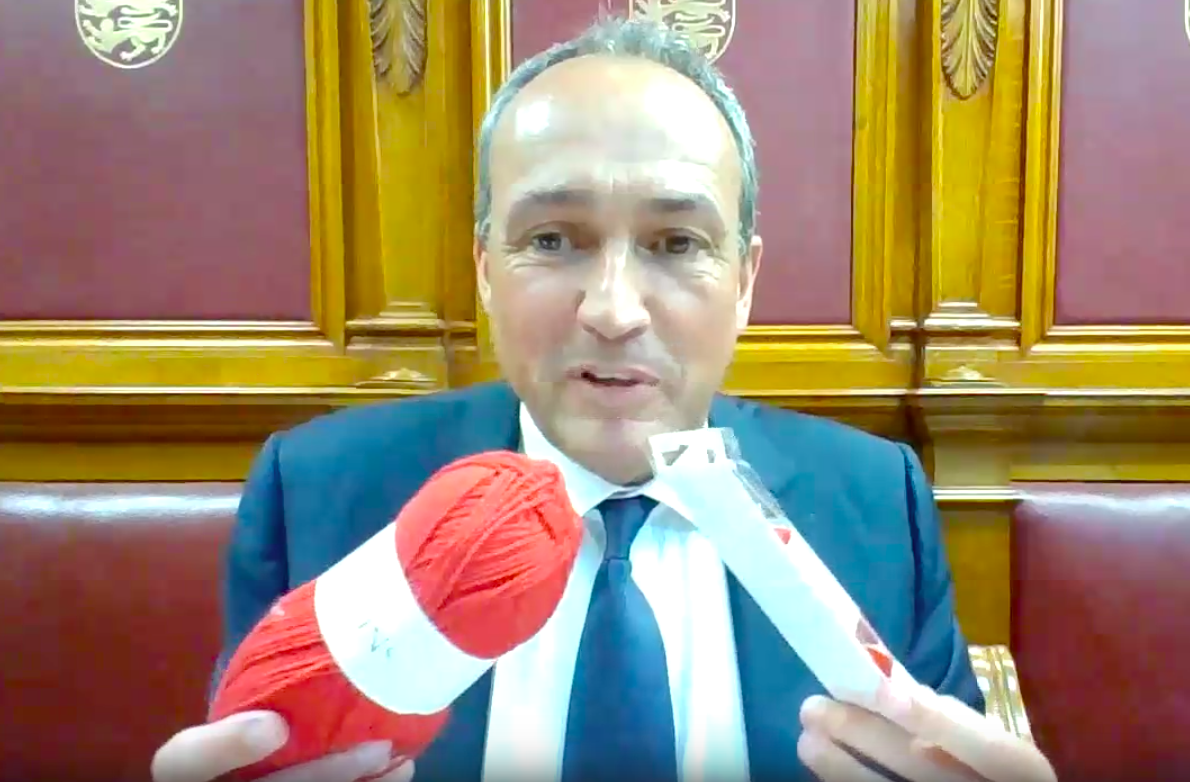 The gift generated much laughter in the Assembly, which was reignited when Deputy Ward thanked him, but noted a “fundamental error”.

“The crochet needle he bought is far too big for the wool,” he pointed out, saying he would stop short of making a tongue-in-cheek joke about having had the problem before.

Senator Kristina Moore returned to the crochet theme as she made her closing speech in favour of capping the hospital cost.

“The gift itself of a crochet kit reminded me of the people during the French Revolution watching the aristocracy at the guillotine as they sat in the square knitting.” 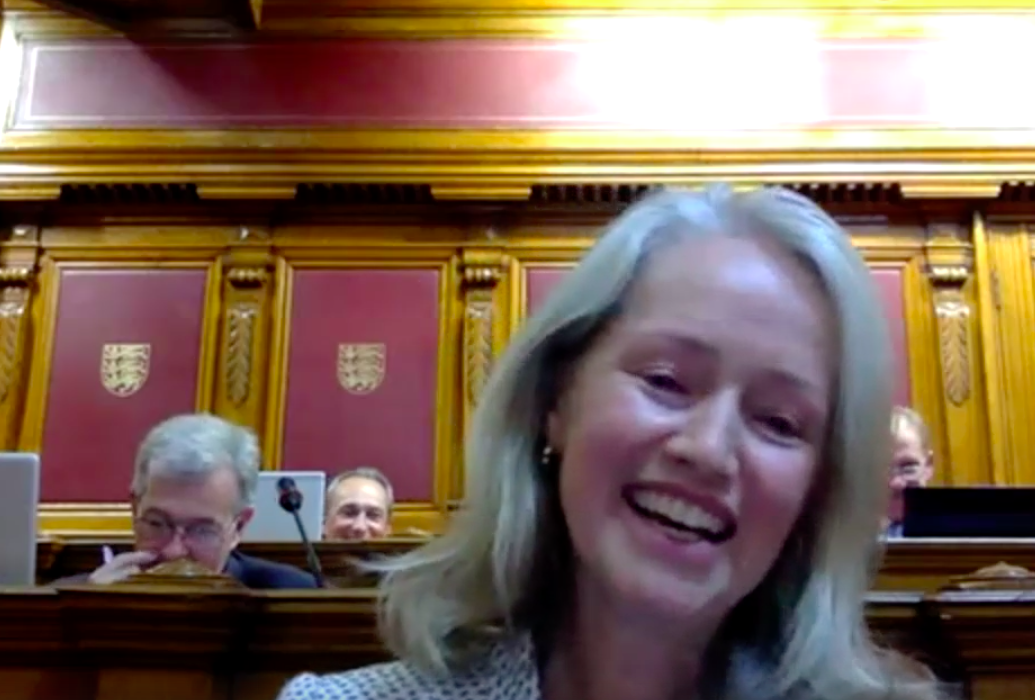 She added that she had her own gift for Senator Farnham “because I know he likes running” – a pair of shoelaces.

“I’m delighted to say we’ve been joined in the gallery by His Excellency, Mr Mansoor Abulhoul, the Ambassador of the United Arab Emirates, and we welcome him to the island, and to our Chamber.

“I hope you have an excellent stay, Sir.”

Fantastic to be welcomed so warmly in Jersey. Thank you to the Bailiff of Jersey, Timothy le Cocq, for giving me a tour of the States Assembly. Fascinating to see the the Royal Mace, a symbol of Jersey's ancient links to the Crown dating back to the years of the English Civil War pic.twitter.com/NcombnwBIj

Good that everyone was on their best behaviour, then.