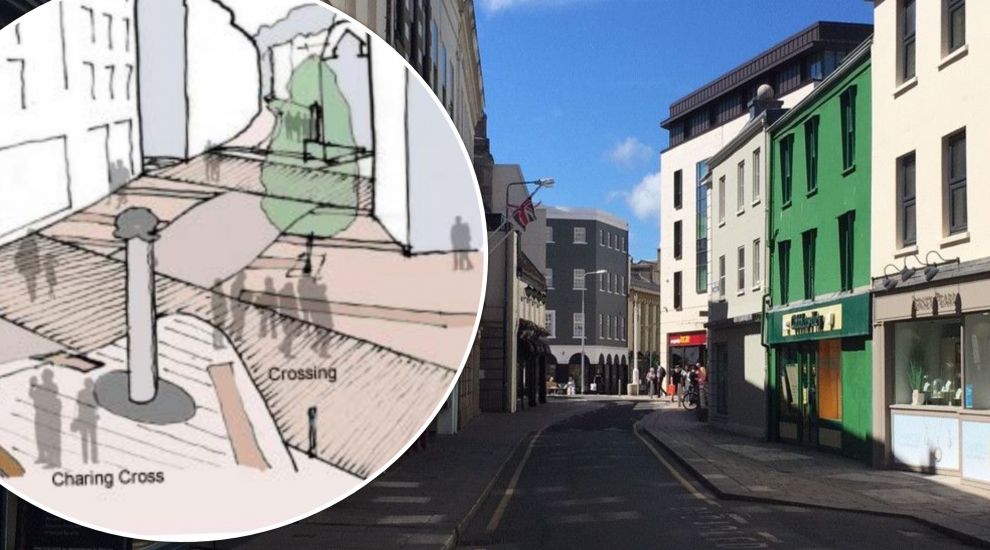 Broad Street should be kept traffic-free in the long-term and the “look and feel” of the area should be improved, a Board tasked with advising the Infrastructure Minister has concluded.

Deputy Kevin Lewis set up the ‘Broad Street Project Board’ in July 2021, 14 months after the road was controversially closed.

Despite strong concerns about the closure’s impact on traders raised at the time, the Minister said it was necessary to permit physical distancing and limit the spread of covid. 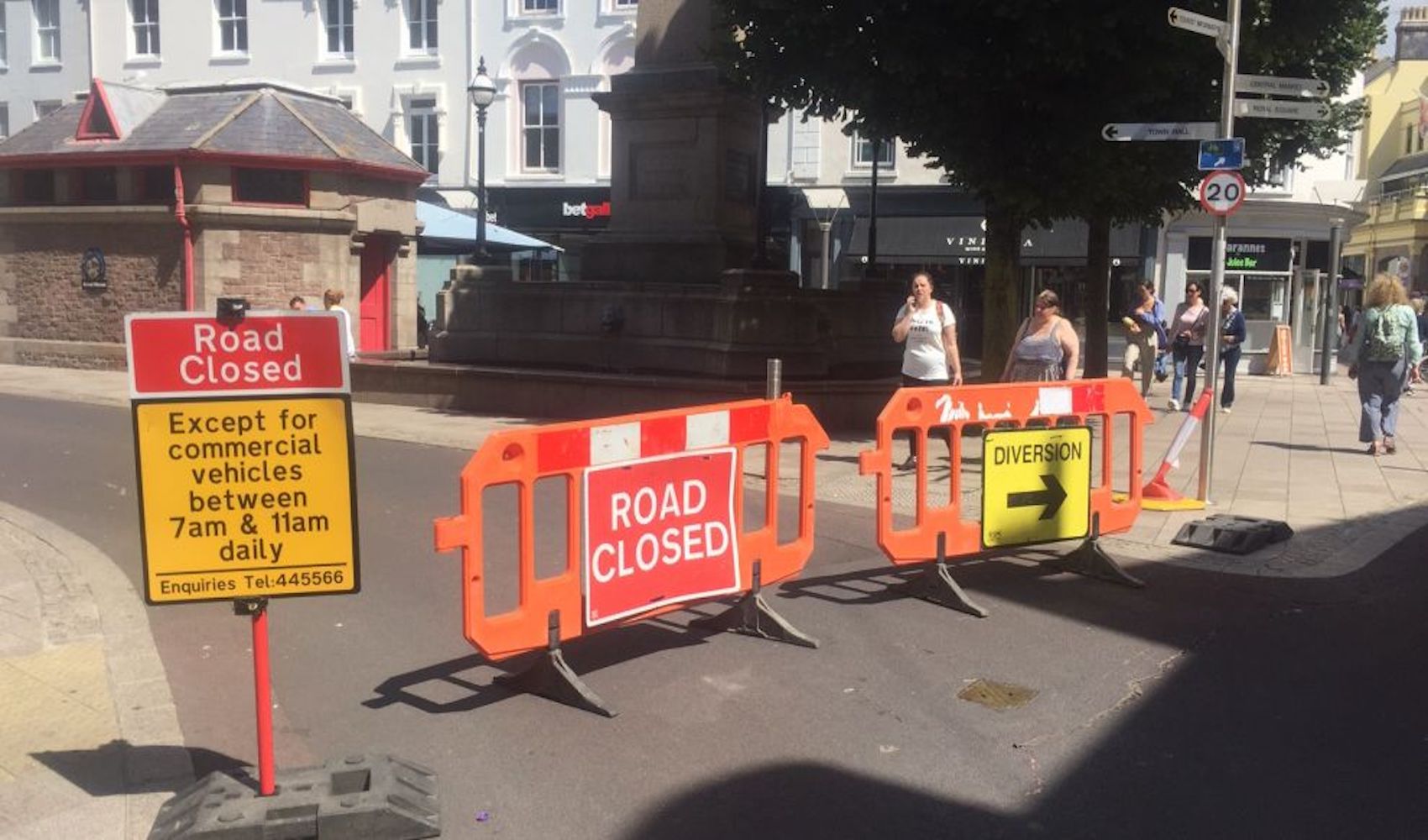 Pictured: The road was first closed in May 2020.

One year later in May 2021, States Members voted for it to remain shut to traffic, apart from buses after 11:00 each day until the end of the year. Deputy Lewis committed to provide an update when the trial was complete.

In line with that pledge, the Minister has now published the Project Board’s findings, which were shared with him in a report last week and made public on Monday.

In their report, the Board recommends that the Minister wait for proposals for Le Masurier’s large-scale development and the new Government headquarters to be “fully developed before considering any change to the Traffic Order currently in force.”

The former received planning approval for a mix of office space and retail units in January 2021, but it is considering further changes with proposals due to be published in early 2022. While they did not detail what the proposals were, they said working with the developer on them presented "exciting opportunity that will form an important part of the longer term thinking."

Comprised of the Government’s Head of Transport Tristen Dodd, the Chamber of Commerce’s Paul Murphy and Town Centre Manager Connor Burgher, the Board said in a report published yesterday that traders appeared to have “adapted” to the new regime and that it would be a “lost opportunity” to return Broad Street to its pre-covid state. 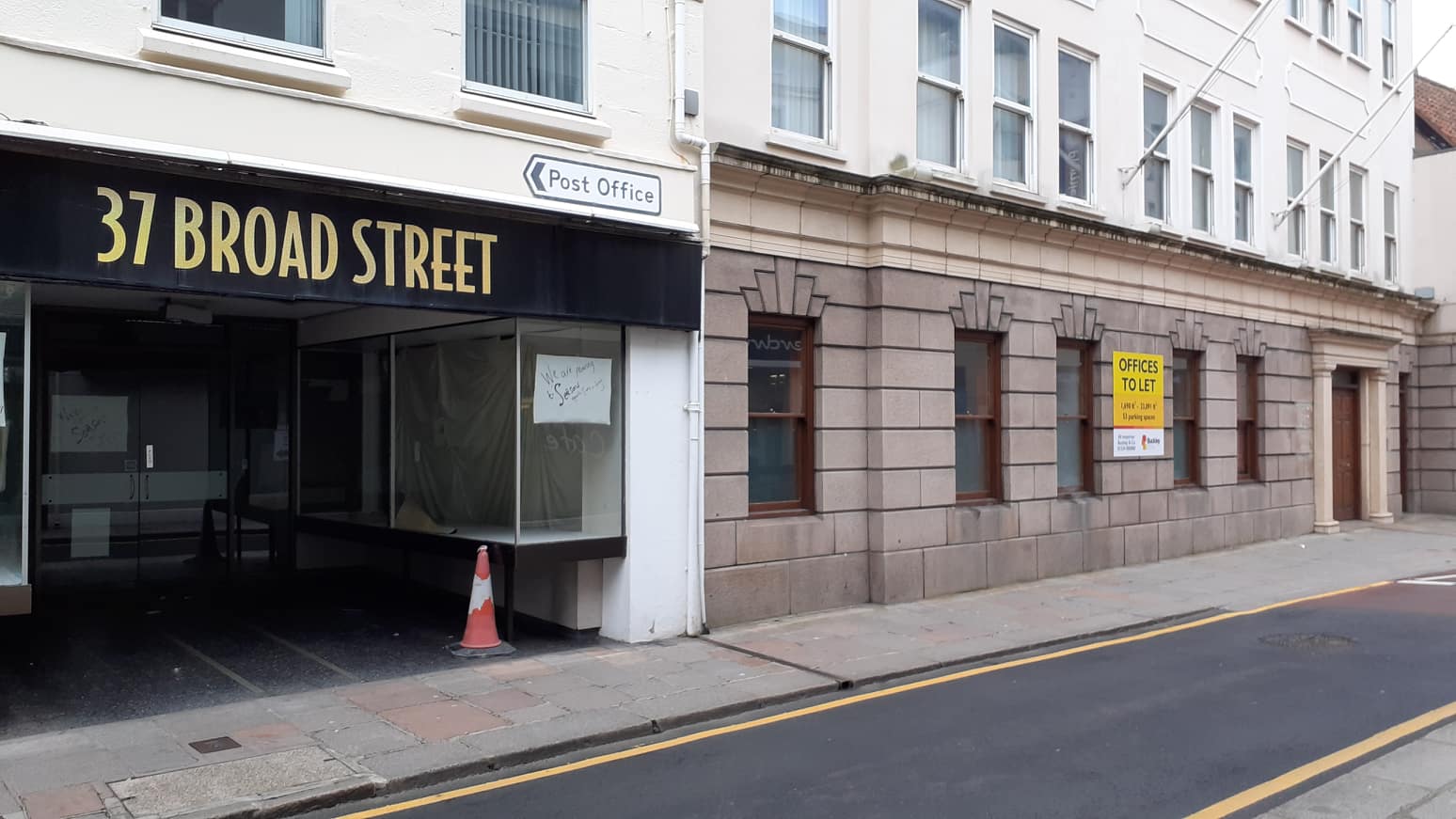 Pictured: Le Masurier owns two acres of land between Broad Street and Commercial Street and is working on proposals to "regenerate" the area.

The Board says the long-term goal should be to reprioritise the street in favour of pedestrians, encourage sustainable transport, support retail and create a “high quality, attractive environment that builds on local distinctiveness.”

To help move towards that ambition in the short-term, the Board says the Minister should support “interim and ‘no regrets’” works to enhance the “attractiveness and usability” of Broad Street.

One such project in the offing is a plan to unify the “disparate styles” of Charing Cross and King Street with clearer pedestrian crossings, better connectivity at the junction for cyclists and a revamped the link between Charing Cross and York Street, “which is currently a ‘poor relation’ compared with the quality of infrastructure that links Charing Cross with Sand Street.”

Another idea is to create a “threshold” at the entrance to Broad Street, New Cut and Library Place.

The Board says: “The current junction that forms Conway Street and Broad Street does not designate a change in road use from a thoroughfare to a road with restricted use, nor does it provide priority for the many pedestrians that cross Broad Street at that point as part of the desire line from New Cut and the pedestrian area around the Le Sueur monument.

“An enhanced threshold treatment would help to clarify the current status of Broad Street and provide improvement for pedestrians crossing whatever the future is for Broad Street.” 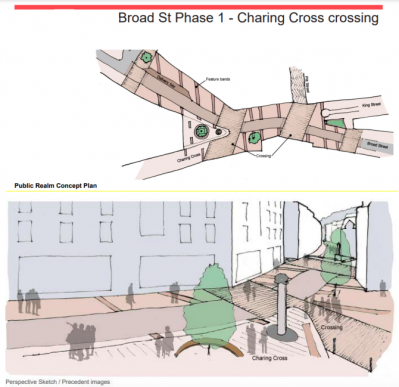 CLICK TO ENLARGE: A mock-up of how the Charing Cross area could be improved.

Finally, they note that “parts of Broad Street road surface and street furniture look tired and unloved when compared with the pedestrianized King Street and the recent public realm improvements around Charing Cross” and state that a “review is required to identify areas where early improvements can be made in the vicinity of Broad Street and it is recommended that the Minister prioritise these works.”

The Board suggests that Government works “collaboratively” with Le Masurier on an “agreed masterplan” for the area.

In last week’s States Assembly meeting, Deputy Lewis was asked by Constable Mike Jackson if he agreed the closure had “failed to produce tangible results in terms of commercial benefit”.

He replied: “I cannot argue with the Constable on that point, but all will be revealed in the report which will be coming forward in the very near future.”

He did, however, label the upcoming trial of a ‘hopper’ bus service down Broad Street as a “success”, stating it would be a “bonus” for islanders with mobility problems in particular.

Starting in 2022, the service is due to operate daily (except Sundays and bank holidays) every 15 minutes throughout the day between 09;00 and 18:00. 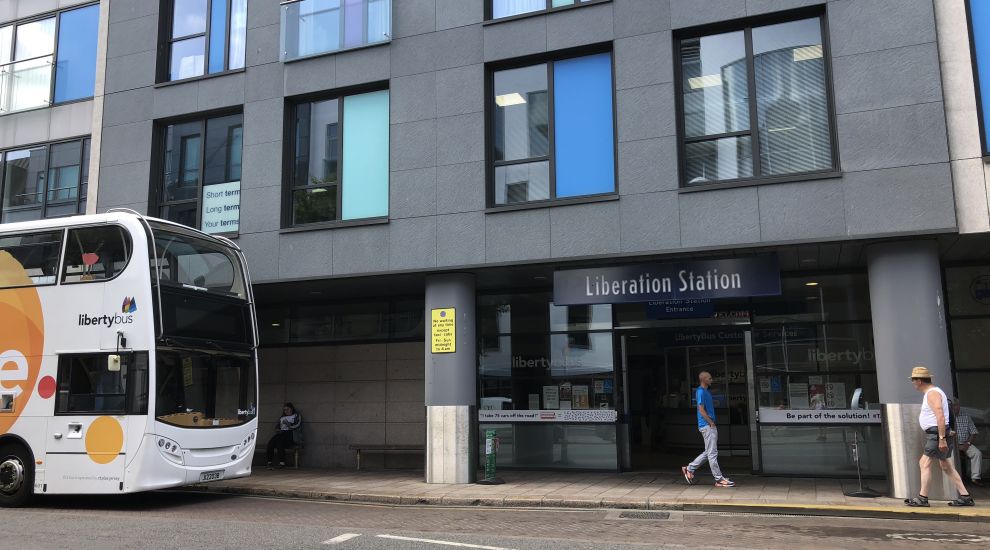 Pictured: There should be a bus every 15 minutes looping around town, passing through Broad Street on the way, under the 'hopper' Town Bus scheme.

The Broad Street Project Board said one of the trial’s benefits was that “it will allow the gathering of data on passenger usage, modal shift and the effect on traffic levels within St Helier”, which will “feed into the Sustainable Transport Policy’s ‘Bus Network Development Plan’ to inform plans for the developing the network alongside public realm improvement proposals.”

Posted by John Sheen on Dec 21st, 2021
Great suggestion. Well done to that panel. There is absolutely no way that cars being banned from that road have any impact whatsoever on nearby shops. If anything, this will encourage more people to relax and enjoy town.
Posted by Jon Jon on Dec 21st, 2021
Always new this road would never re open,add more roads to close around town,it’s dying now town anyway,parking charges increasing,easier shop online and cheaper,like many people no need to venture in town,online banking,online shopping delivered to my door!
Posted by Colin Masterman on Dec 21st, 2021
Broad Street has become somewhat of a haven since it was closed to traffic, and I see a greater footfall in the area. I doubt very much that businesses have suffered because of this. They have suffered, as have we all, from lockdowns etc. The more pedestrianised town becomes the better. It makes it safer and more attractive to shop in. Well done that panel.
Posted by Frustrated Islander on Dec 21st, 2021
The road was never going to re-open but the news article may have given a strong hint as to why it was closed in the first place, not Covid related. The Le Masurier large scale development plans are awaited....
Posted by nigel pearce on Dec 21st, 2021
To make it safer for pedestrians, all cyclists should be banned from using any pedestrianised street. I’ve spent more time avoiding cyclists than I ever did avoiding cars.
Posted by nigel pearce on Dec 21st, 2021
With its unrestrained spending the government is doing its best to bankrupt the island. Now they want to bankrupt the town shops by hindering traffic access.
Posted by Keith Marsh on Dec 21st, 2021
A Political decision, it was never going to open again, as most of us said at the time of closure. Just happens to make the road quieter for The States Offices
Posted by Michael Tostevin on Dec 21st, 2021
Taxis should also be allowed access to Broad Street the same as buses. They cannot properly service the Premier Inn Hotel and have to drop off visitors some distance away. Recently a taxi driver had a passenger who was disabled staying at this hotel and had to drop them with their luggage some distance away....good welcome to Jersey. Then how can they get picked up again by taxi...impossible....once again, it's all about the buses.
Posted by Jean Lelliott on Dec 22nd, 2021
The Broad Street project board? Who even knew they existed? Who decided who was on this board? There are shopkeepers who want this road re-opened, no matter what some people say, it also means longer journeys for traffic which we are supposed to be avoiding.
Posted by IanSmith97 on Dec 22nd, 2021
Most people I see walking there still use the pavements. They do that to avoid the smug, green obsessed guardians of the island’s conscience, the cyclists. Why are they allowed to cycle on it when they are (legally but not in practice) banned from King St and Queen St? Illogical.
To place a comment please login Login »