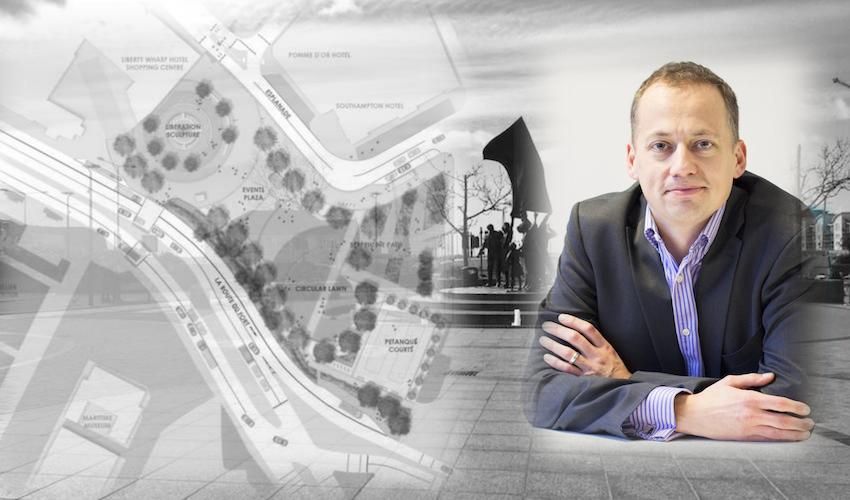 Business owners have banded together to accuse the government of being “disingenuous” over the “lack of consultation” on £1.4m plans to revamp Liberation Square.

Jersey’s Chamber of Commerce – a body which represents businesses in the island – has hit out at proposals to get rid of the Esplanade link road between Liberation Square and the Weighbridge to create one, large amenity space ahead of the island’s Liberation 75 celebrations.

Although the project is still in its early stages, Chamber has expressed serious “concerns over the consequences that may arise from [the revamp]” on behalf of businesses in Jersey.

Pictured: The proposals have been put together ahead of Liberation 75 celebrations in 2020.

In their statement, Chamber says that, contrary to Deputy Lewis’s claim that business owners in the vicinity of the squares “are largely happy with what is proposed”, they are in fact “less than happy with the plans".

Images of the plans, which were originally announced by the Minister for Infrastructure Deputy Kevin Lewis in December, were released last week for public and business consultation ahead of a formal planning application being submitted.

£1.4million has been put aside for the project in the 2019 Budget and there could be more money allocated for the day's events, including potentially high-profile Royal guests.

Deputy Lewis also explained that there will be a separate consultation event for business owners, as well as a day for members of the public to share their views.

Pictured: Preliminary sketches of the plans have been unveiled before this week's consultation events.

Despite this, Chamber President Eliot Lincoln has hit back at the plans, as well as accusing the government of glazing over business concerns in the interest of ‘rushing’ the project through.

“Personally, I just don’t see the benefit of the current plan when weighed against the disruption, delays and frustration it will cause. For the few events that we have during the year that would require the joined-up space, we can close the intervening road like we have been doing," he said.

“…Here we have a project that is already scheduled to cost an additional £1m, that is being rushed through. The normal engagement process used for other traffic changes being cast aside on this occasion without and thoughts on the impacts to the retail heart of our island. Giving the impression in a Government press release that everyone is happy with these plans is, at best, disingenuous.”

Although a formal planning application hasn’t been submitted yet, the revamp is due to be completed and open by 9 May 2020, in time for the island’s Liberation 75 celebrations.

Pictured: It is proposed that the Esplanade link road between the two squares will be extinguished to join the areas together.

Amongst business owners’ concerns is the impact that extinguishing the link road could have for traffic and taxis which operate in the area.

Of the plans, Domino Cabs owner Ian Le Gallais said: “Before launching such plans, Taxi drivers and businesses that regularly have to deliver through St. Helier should have been consulted.

“The impression we get is this is a foregone conclusion. It is also disappointing that there is a lack of any consideration to increasing the taxi spaces in the areas, despite rank drivers having asked for this for a long time.”

This comes after the Jersey Taxi Drivers Association have launched an online poll on their Facebook page “to gauge public opinion” on the proposals for the town revamp. They predict that by getting rid of the road and thus forcing taxis to drive via the roundabout by the underpass to get to the tunnel, it will prompt fares to go up.

Jersey Chamber of Commerce are now calling for an “urgent review on the plans” with their members as well as “further thinking on this proposal".