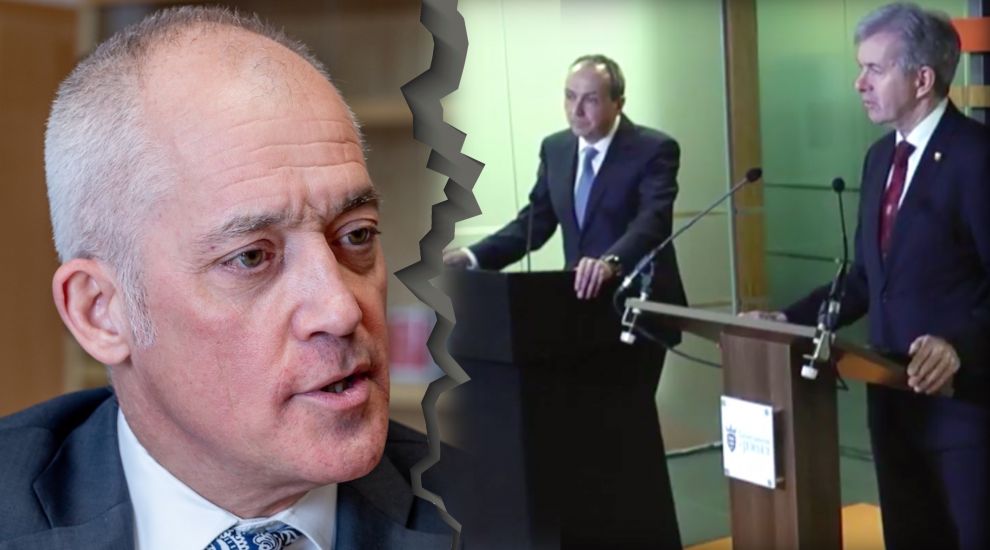 The fall-out from the Government CEO Charlie Parker’s second job is continuing, with the Chief Minister now considering how to respond to a report on a communications blunder that saw his Deputy wrongly stated as having approved the controversial New River role.

After news broke of Mr Parker’s Non-executive Directorship at the UK real estate firm, the Government released a statement saying that the role was “cleared by the Chief Minister and Deputy Chief Minister.”

After the announcement that Mr Parker had "agreed" to step down over the saga and himself having survived a vote of no confidence, Senator Le Fondré confirmed that neither himself or Senator Farnham had approved the press release and launched an investigation to "find out exactly, blow-by-blow, what happened and when" within the Communications team.

He confirmed to Express last night that he had now received that report - which he declined to release into the public domain - and was considering his next steps.

Pictured: A review of communications processes in Government is underway.

In the meantime, he said that the Government's Communications team has been tasked with tightening up its processes.

"I have now received an update from the Director of Communications on this matter, which I am presently considering. In the meantime, the Communications Directorate and Ministerial Support Unit will be working together on enhanced protocols to improve processes for sign-off by Ministers," the Chief Minister commented.

"As the update is on internal processes, it is not appropriate to share this externally at this time, however we will make the enhanced protocols public documents in due course."

The latest chapter in the saga coincides with a response to a Freedom of Information (FOI) request from Express asking for Mr Parker's written requests and permission for both his second role at New River and on the Buckingham Palace Reservicing Board.

Mr Parker's contract states that any positions outside of his role as CEO should be confirmed in writing by his 'Employer'.

However, in reply to the FOI request, the Government said, "We do not hold this information," and added that Article 10 of the Freedom of Information Law applied.

Article 10 is a legal obligation to tell the applicant if the information requested does not exist on file.

Deputy Inna Gardiner, who is Chair of the Public Accounts Committee (PAC), which is the only Scrutiny Panel with direct responsibility for holding the island's top civil servant to account, said her team would be taking the FOI response into account in their upcoming review of the saga.

PAC's next public hearing with the CEO is scheduled for 7 December.

Posted by Steven Simon on Nov 24th, 2020
Is it just me or are the SOJ in a complete mess? It would seem like it. It seems to be one thing after another. Complete shambles from top to bottom
Posted by John Henwood on Nov 24th, 2020
My understanding (which could be wrong, but I believe to be correct) is that a press release which includes a quote from a minister MUST be approved by the minister before release. The release around which so much controversy has occurred quoted neither the Chief Minister, nor the Assistant Chief Minister. In that case the communications unit would be authorised to send out a press release if they were satisfied the contents were correct. That then raises the tricky question of who said exactly what to whom and when. When questions like that arise it is almost impossible to get to the bottom of the issue not least because, in such circumstances, memories tend to be fragile.
Posted by Bob Wareing-Jones on Nov 24th, 2020
The sad outcome of this saga is that, whoever fills the vacancy left by Charlie Parker, will face exactly the same challenges. Anyone looking to fill the CoE roll post Parker will note , just how difficult it can be to work under such a disjointed and poor governmental system. Sadly, SoJ Government has exposed itself in the wider civil/public service community as being a very entrenched one indeed. It would have been better for all concerned to have encouraged Parker to stay, complete the job he was employed to do whilst accepting NED appointments are not in the best interests of SoJ Gov.
Posted by Michael Blampied on Nov 24th, 2020
This is unbelievable. We, the voting public, were totally misled into believing the deputy CM had given a thumbs up to the former CEOs evening job, when effectively he (the deputy CM) had actually done the opposite. Cue the (absolutely justifiable) “blow by blow” enquiry into the communication cock-up which has duly been undertaken and a report issued. But our CM now chooses to deny us, the voting public, sight of that report. What on earth has happened to transparency, accountability etc of government? This is a totally unacceptable way to treat the electorate.
Posted by Private Individual on Nov 24th, 2020
It is very simple to address this problem.

Remove the job of CEO from the civil service and get the states members to do the job they are being paid to do.

It is unbelievable that with all the highly paid civil servants we have employed by the states that they cannot find one person locally to advise the Chief Minister.

We are advertising ourselves as a place to do high-value financial business but can't find anyone to fill this role. If that is the case then do away with it.
Posted by Paul Troalic on Nov 24th, 2020
Interesting that John Henwood says that 'memories tend to be fragile'. Clearly it does not apply to him as he recounted almost word for word what happened in the Parker saga.
Clearly a super human!
As for the comments by another poster about the civil service 'being a very entrenched one' , these people are some of those that Parker employed, at least those that would make any decisions.
The general employees generally just do as they are asked as they have jobs to do.
Posted by John Henwood on Nov 24th, 2020
Paul Troalic is right - the question of memory does not apply to me, because it doesn't have to. I was there taking contemporaneous and copious notes as any good journalist, or policeman, or lawyer should. So Mr. Troalic, my record of events is accurate, your speculation might be questionable.
Posted by Keith Marsh on Dec 3rd, 2020
This saga sounds more like a sketch from "Yes Minister" after every dreadful episode. Jersey does not need a CEO ~ it has very highly paid and competent heads of departments who should report to their respective Minister.
Then these Ministers discus and brief The Chief Minister in Cabinet Meetings.
This is NOT Whitehall and we don't want it to be a tiny copy.
Posted by Scott Mills on Dec 3rd, 2020
I've only ever seen Charlie Parker in 2D, just like a comic strip.
Posted by Scott Mills on Dec 3rd, 2020
private individual, if everything is to be believed we rip off other countries around the world to the tune of £8billion a year. Yet they (our government) hound and fine their own people for filling their taxes late. Can't script it
To place a comment please login Login »