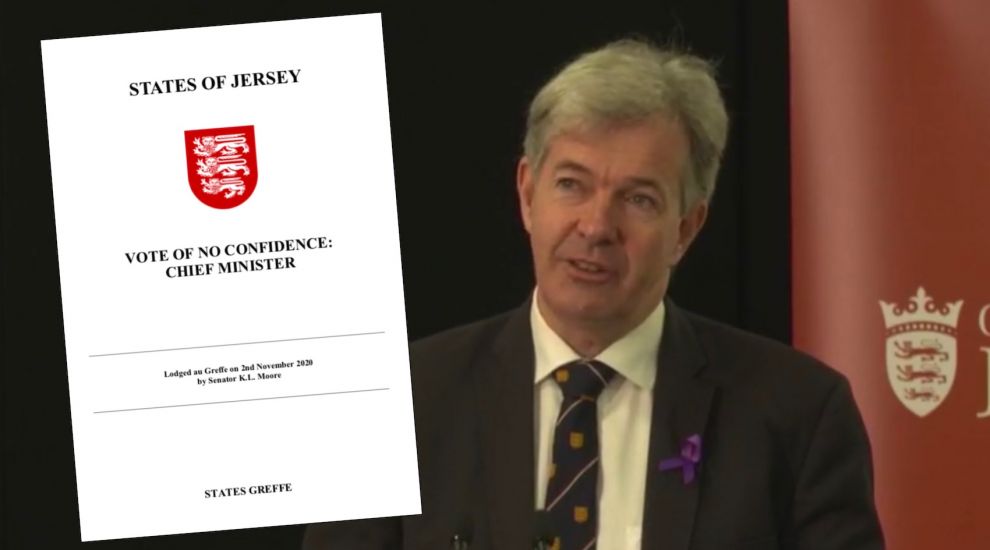 Senator John Le Fondré has held onto the island's top political role after surviving a vote of no confidence.

Following the vote, the States Assembly will meet as usual next Tuesday (17 November), at which meeting the Chief Minister will be invited to nominate a States Member to become Minister for Children and Housing, replacing Senator Sam Mézec, who stepped down to support the no confidence bid.

Assistant Ministers Deputy Montfort Tadier and Senator Steve Pallett also resigned from their roles. As a result, the following Assistant Minister posts also need to be filled in due course:

The vote of no confidence proposal had been brought by Senator Kristina Moore in the wake of the bitter row over Chief Executive Charlie Parker’s second job at UK real estate firm New River, for which the Chief Minister gave verbal permission.

She opened the debate this morning by emphasising: “This is not personal, this is about principles, values and performance.”

While she touched upon the saga over the outgoing Chief Executive’s second job, she went on to explain that the reasons behind bringing the vote were numerous, and included:

She went on to accuse Senator Le Fondré of “allowing a culture of bullying” to sweep throughout the public service and said he had lost the support of the public during the pandemic, citing a statistic that confidence had fallen to 37%.

Fighting for his future, the Chief Minister opened by warning States Members that a “vote of no confidence is an extremely serious matter at any time, but especially in the middle of a pandemic", before taking the States Assembly through the ‘wins’ of his term so far.

Turning to his own character, he challenged “anyone who dares question my commitment to islanders” and his ability to continue to lead, speaking of how he had maintained “clarity of thought” despite “months of sleep deprivation.”

He admitted making “genuine mistakes” in the absence of having “full information to hand”, but questioned: “Have I really made such a large number of mistakes I haven’t tried to rectify?”

Senator Le Fondré concluded by emphasising that, to remove a Chief Minister in the middle of a pandemic with Brexit looming would swapping one crisis for another.

CLICK HERE to see the full breakdown of how States Members voted.

Posted by Dave Mathews on Nov 11th, 2020
Well done Senator John Le Fondré.
I guess the main people with egg on their face are the ones who resigned as a Ministers in advance of the Vote.
Posted by Peter Richardson on Nov 11th, 2020
I’m very pleased JLeF survived as this motion was really just an opportunistic attempt to settle old scores. Will CP continue along with his hand picked clan or do we scout around England for a replacement? We have the talent here, but those in charge just prefer to ignore it. So plenty of new ministerial appointments following the mutiny by the expected crew, and all for nothing it seems. Hence my first comment. CM has made herself rather unpopular with those ex ministers I expect. If there’s a second attempt in the summer then a spot of planning would be a wise rather than trying to kick our chief minister in the middle of a pandemic.
Posted by Private Individual on Nov 11th, 2020
The government is like a festering sore that just won't heal!

How on earth is the chief minister allowed to vote for himself???

The good old boys club of the constables never break rank and kept him in his position 7 this time, although I am impressed that Mike Jackson and some of the others voted against him, well done Mr. Jackson.

Shame on Senator Vallois abstaining. As a Senator, she should have voted either way what a weak minister she has turned out to be.
Posted by Bob Wareing-Jones on Nov 11th, 2020
We must hope that the debate yesterday, at least results in positive outcomes, not least notice being taken of those who spoke with well thought out and considered arguments highlighting some of the concerns about the direction of travel of the current Council of Minsters decisions and policies. The debate at least rendered an opportunity for clearing the air but the votes were counted, the result announced and its time to move on. Personally, I think it would have been a benefit to all concerned to have had a change of leadership followed by the election of a new CoM. This could have provided fresh perspective, a time for reflection on where we are, where we have been and how best to move forward. There are significant challenges ahead not least, ongoing Covid 19, the Economic consequences of the Pandemic, Brexit looming and all its uncertainty and despite Donald Trumps protestations a new President in The White House. This latter challenge cannot be ignored, who resides in the White House matters as it impacts on the whole world. The UK are exposed, due to the vote to leave the EU, in ways we do not as yet fully understand. But! If Biden decides to move to a less close relationship with the UK than his predecessor this could potentially have significant effect on us all? The no-confidence vote is over, no doubt more is to be said about the handling of the outgoing CEO’s additional job and its consequences. However, what we all need now is for the current members of the CoM and that those appointed to fill vacancies, are all ‘round pegs in round holes’. We need our government to be at the top of their game, fit and able to meet the challenges they face and have all the help and support they need. Perhaps now the air has been cleared, those most vociferous in their lack of confidence in John Le Fondre and the whole assembly can now get back to the work of governing for the common good. Is this not what we who voted in the last election have every right to expect?
Posted by IanSmith97 on Nov 11th, 2020
Let’s be honest, J Le F survived this vote because C P walked the plank, whether voluntarily or involuntarily. I just don’t get if someone resigns they get a pay off. Of course it all depends on the contract of employment, so let us see that.
Posted by Jon Jon on Nov 12th, 2020
I hope Le Fondre replaces Vallois,she hasn’t the bottle to vote,another waste.
To place a comment please login Login »