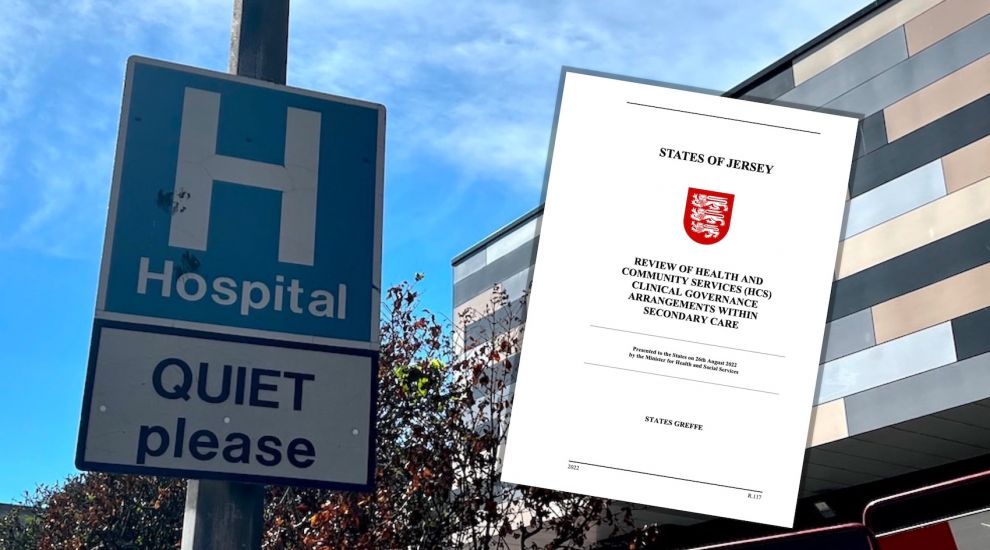 The Chief Minister has denied that appointing the Medical Director's former mentor - who later authored a damning £85,000 report alleging a 'Jersey Way' within Health - to lead the new board overseeing the service has created a “conflict of interest”.

Senior clinical lecturer Hugo Mascie-Taylor – who has been recruited to lead the new ‘independent’ Health and Care Board on a 12-month contract, spending three days a week on the island – was asked to undertake a review of “clinical governance” in the island’s health service by Director General Caroline Landon last year.

He had previously been External Assessor during the appointment of Medical Director Patrick Armstrong, and was asked by Ms Landon to mentor him in the role, which involved weekly meetings with Mr Armstrong.

Published in August and based on interviews with more than 50 staff, Professor Mascie-Taylor's resulting report claimed that bullying, a "bias against standardisation" and "vested interests" are dominant in the island's health service and posed a threat to patient safety.

It made 61 recommendations – among them, a call to improve the board responsible for holding the organisation to account and insisting upon "safe, high-quality practice".

On Friday, Health Minister Deputy Karen Wilson announced that the board had been disbanded and that Professor Mascie-Taylor had been appointed to lead its replacement, beating off more than 50 candidates.

In response to questions from the JEP and Bailiwick Express, the Health Department said yesterday that it did "not perceive the appointment of Professor Mascie-Taylor for a period of 12 months as a conflict of interest as he now moves from author to implementor."

"Professor Mascie-Taylor made an individual application as part of the international search for a suitable candidate and was appointed through an independent process managed by the Jersey Appointments Commission," it added.

In the States Assembly this morning, newly appointed member of the Health and Social Services Scrutiny Panel Deputy Andy Howell told the Chief Minister she was aware of concerns among health staff about the appointment, given Professor Mascie-Taylor's "previous professional relationship with members of the executive."

Deputy Kristina Moore responded that she had "confidence in the process that led us to this decision", noting that there had been more than 50 applicants.

She added that Professor Mascie-Taylor's "previous knowledge and expertise" meant the Government was in a "really good place to tackle the important issues" within Health, particularly clinical governance and culture.

After Deputy Howell responded that it was "very unfortunate" that the other finalist – whose identity has not been disclosed – was not chosen, as they "would not have had the same conflicts of interest", the Chief Minster said: "Yes, there was a mentoring role but that was a professional mentoring role, not a personal arrangement... that I do not think creates any conflict of interest and I hope I can reassure the Deputy of that."

The Health Department confirmed to Express and the JEP that no Jersey candidates "formally applied" to the position of Chair.

The recruitment process was carried out by health-specialised executive search firm Gatenby Sanderson – whose fees were described as "commercially confidential" – and overseen by the Jersey Appointments Commission (JAC).

Of the 52 candidates that were sourced, five progressed to interview.

On Friday, Professor Hugo Mascie-Taylor said that he was "delighted and privileged" to have been appointed.

"During the process of the review which I recently undertook I had the opportunity to speak at length with over 70 people in the organisation," he added.

"I know that the service has many committed staff who wish to be part of a strong, mutually respectful, and effective team delivering the best possible care to all patients. I look forward to working with them to put in place the key structures, processes, and culture and behaviours necessary to drive improvement, openness and transparency.

"This will enable patients and carers in Jersey to be assured that the quality and safety of the care they receive compares favourably with other health systems elsewhere in the world."

For more on this story, read the Jersey Evening Post tomorrow...

Author of damning £85k report appointed to lead Health board

IN-DEPTH: “How much evidence does Jersey’s health service want?”

Posted by Stathia Ekdikisi on Nov 22nd, 2022
The conflict of interest relates big way to the fact that the professional mentor of General Medical Director Armstrong did not reveal that relationship in the 85k report. He preferred to pose as an independent expert. The fact that hand selected search agency paid with taxpayer money the undisclosed sum provided 52 candidates is meaningless here. One can provide 100 candidates and among them the one agreed with the sponsors. The role should have been advertised for few weeks in Jersey, UK and Europe to attract right candidates. Big disappointment with Prime Minister's judgement.
Posted by Scott Mills on Nov 22nd, 2022
something doesn't sound right here. Fighting over the baton rather than passing it on, seems to be the practise in Health.
Posted by Esporta Johnson on Nov 22nd, 2022
Poor chap doesn't even remember to how many people he spoke to for the report. Quoted above, on Friday, he said that "During the process of the review which I recently undertook I had the opportunity to speak at length with over 70 people in the organisation,". Page 7 of his £85.000 report provides a bit different account: 'The methodology used was a simple one. Professor Mascie-Taylor undertook 77 semi-structured non-attributable interviews, using open and closed questions, with 53 people during 7 visits to Jersey'. Attention to detail must not have been among the essential requirements for the job. I would like the government to reveal how much will the new chair cost the taxpayers. For his 7 visits to Jersey Professor Mascie Taylor charged us £85k which gives some £12.000 per visit. We don't know the honorarium for his weekly caching of our Medical Director. Now he will come for 3 days per week some 50 times (assuming there won't be any extension) so I would expect a decent figure. Wikipedia provides the following information on him: 'as of 2015, Mascie-Taylor was paid a salary of between £195,000 and £199,999 by Monitor, making him one of the 328 most highly paid people in the British public sector at that time'. Times have changed and there has been quite substantial inflation since, the costs of living must have increased.
Posted by Aston Francis on Nov 22nd, 2022
It is such a relief to be reassured by the Prime Minister that there is no conflict of interest for the professional weekly mentor of Medical Director Armstrong, selected personally by Director General Landon being appointed to the role of independent chair of the independent bard (which he invented in his independent 85k report) to provide independent oversight of Mr Armstrong and Director Landon and their direct reports.
Posted by John Henwood on Nov 23rd, 2022
I have no criticism of Professor Mascie-Taylor whose report was very good, highlighting serious problems in the Health Department. However, it is difficult for someone who has formed a relationship with a senior manager - and whatever the Chief Minister says, mentoring does create a relationship - to separate that relationship from the need to take hard decisions. It is not the most sensitive of appointments. The problems at Health start at the very top and it is vital absolute independence from the most senior management at Health is not only observed, but also seen to be observed. We are yet to see real transparency and proper accountability at Health.
Posted by Keith Marsh on Nov 23rd, 2022
Sorry Chief Minister, you have made a grave error, if you believe the public cannot see through your words, and yes the whole thing stinks.
Why did Director General Caroline Landon deem it necessary to employ Professor Mascie-Taylor to write such report in the first place, does she not believe in her own abilities, to run the hospital well, because if that is the case, she should resign now.
Posted by EdWilliams4 on Nov 23rd, 2022
JEP has just published the agreed remuneration for the mentor of Mr Patrick Armstrong, the author of the £85k report commissioned by Director General Caroline Landon and the newly appointed Chair of the ‘independent’ Board resulting from his own report. £225.000 per year being £1.440 per day plus expenses. The new Chair decided to move to the Island and his travel and accommodation will also be funded by the taxpayer. Including the benefits he will earn per day more than an experienced nurse is earning in 2 weeks. I don’t believe we are funding accommodation for the nurses or doctors coming to Jersey but I might be wrong. Moving to the Island Professor will also benefit from low taxes. Calling it a conflict of interest is an understatement. With such enormous salary helped by Director Landon and Deputy Wilson, with almost two years of weekly mentoring relationship with Mr Armstrong he might find it challenging to ensure the independence from his generous sponsors.
Posted by A Hudson on Nov 23rd, 2022
A conflict of interest does not mean that an individual actually committed any wrongdoing. It can be defined as ‘a situation in which a person is in a position to derive personal benefit from actions or decisions made in their official capacity’. Conflicts of interest do happen. What is critical is a transparent and upfront declaration of the conflict of interest. So as long as Professor Mascie-Taylor openly declared in the 85k Report that he had been serving as a mentor, on a weekly basis to Mr Armstrong (which is a close mentoring relationship and likely involved significant remuneration), had he declared it in his recent application and cv used for his recruitment to the Chair of the new Board it should be fine and then indeed the Prime Minister would be right to accept the appointment despite the obvious conflict of interest here.
To place a comment please login Login »