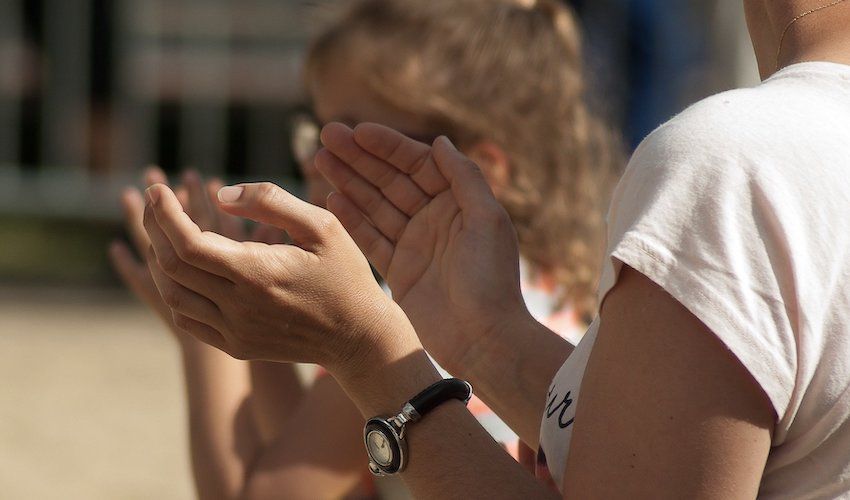 Islanders are being invited to get clapping from their window on Thursday in a public demonstration of appreciation to all those “on the frontline” of the fight against covid-19.

The one-minute #clapforourcarers will take place on 26 March at 20:00.

The local appeal follows the example of the UK where a post is being shared inviting people to give “a big applause” to show nurses, doctors, GPs and carers “our appreciation for their ongoing hard work and fight against this virus." The practice is already widespread in France and Spain.

After many islanders voiced their wish to do the same, Iain Shaw contacted States Members asking for their opinion about the initiative.

As a number of them showed their support, he put together a flyer inviting islanders to not only show their appreciation for health carers at all levels, but also “pharmacists, call centre staff, shop assistants, charities, volunteers, businesses”. 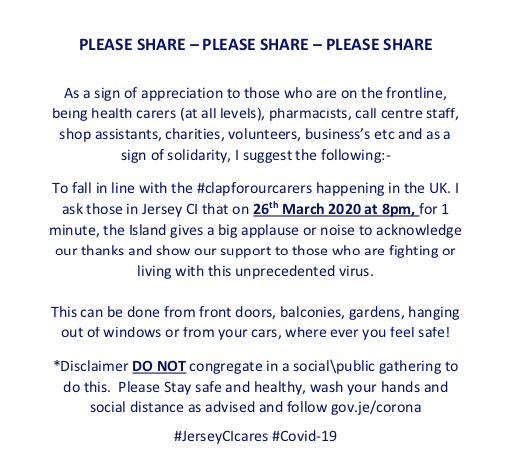 Pictured: The flyer put together by Mr Shaw.

Mr Shaw hopes to see the island “united together” in a big applause to ”acknowledge our thanks and show our support to those who are fighting or living with this unprecedented virus”.

“There are other countries who have done it,” Mr Shaw said. “I saw there was a flyer for something happening in the UK for the NHS staff and I thought it was a good idea.

“It’s an act of goodwill and an act of solidarity.”

Explaining he has had to rely on the community in recent years, Mr Shaw said creating the flyer and getting the word out there was “one small way to pay back what the community has done for me”.

Video: People clapping and banging for the medical staff in France, near Montpellier.

Islanders can join from their front doors, balconies, gardens, windows or their cars but Mr Shaw reminds everyone they should not congregate together to clap, as all islanders should be practising the rules of social distancing to prevent the virus from spreading further.

“It’s a show of solidarity, the island united together,” Mr Shaw. “The island has had a bad rep over the last couple of years with people saying the community spirit has died but this is one time where the community across the board can come together.”

Video: People gather on their balconies to clap in Paris. (Credit: Mathieu Galarin)

Mr Shaw wants islanders to share the word with their neighbours so that not only they can join but also so that no one is surprised when they hear the clapping.

“I just want to make sure we do not scare people,” he said.

“I just want everyone on the frontline or those who have the virus to know we are thinking of you. People can clap, blow their car horn, bang pans together, it’s just something so that people realise they are appreciated.”