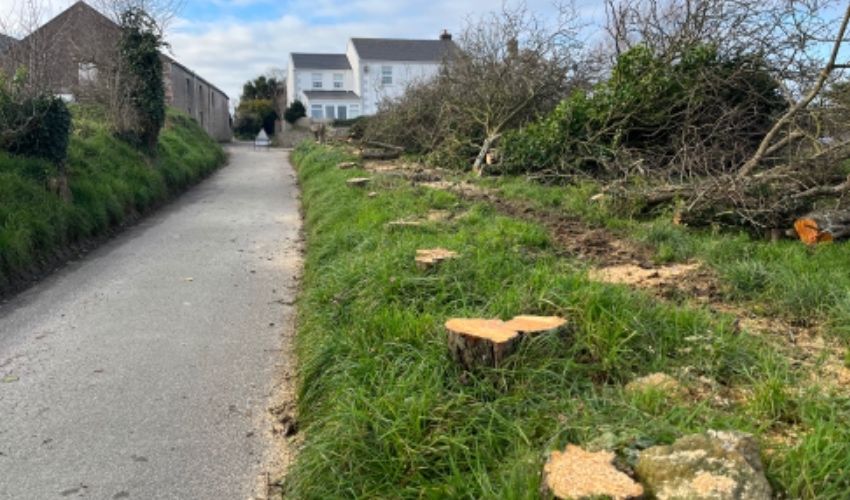 Islanders getting some fresh air through the lanes this Christmas are being asked not to panic if they see lines or sections of hedgerows lopped practically to the ground.

It is not an act of environmental vandalism by a neighbour wanting to improve their view. Nor is it a sign of disease or reckless rural management.

Rather, it is an example of the ancient practice of coppicing.

And within a year, the hedgerow should bounce back stronger, denser and easier to maintain.

Around 1km of hedgerows around fields farmed by Jersey Dairy suppliers are being cut down to allow the plants to regenerate.

The work is following on from a condition survey that was undertaken earlier this year to identify which hedgerows were in the poorest condition and in need of coppicing. 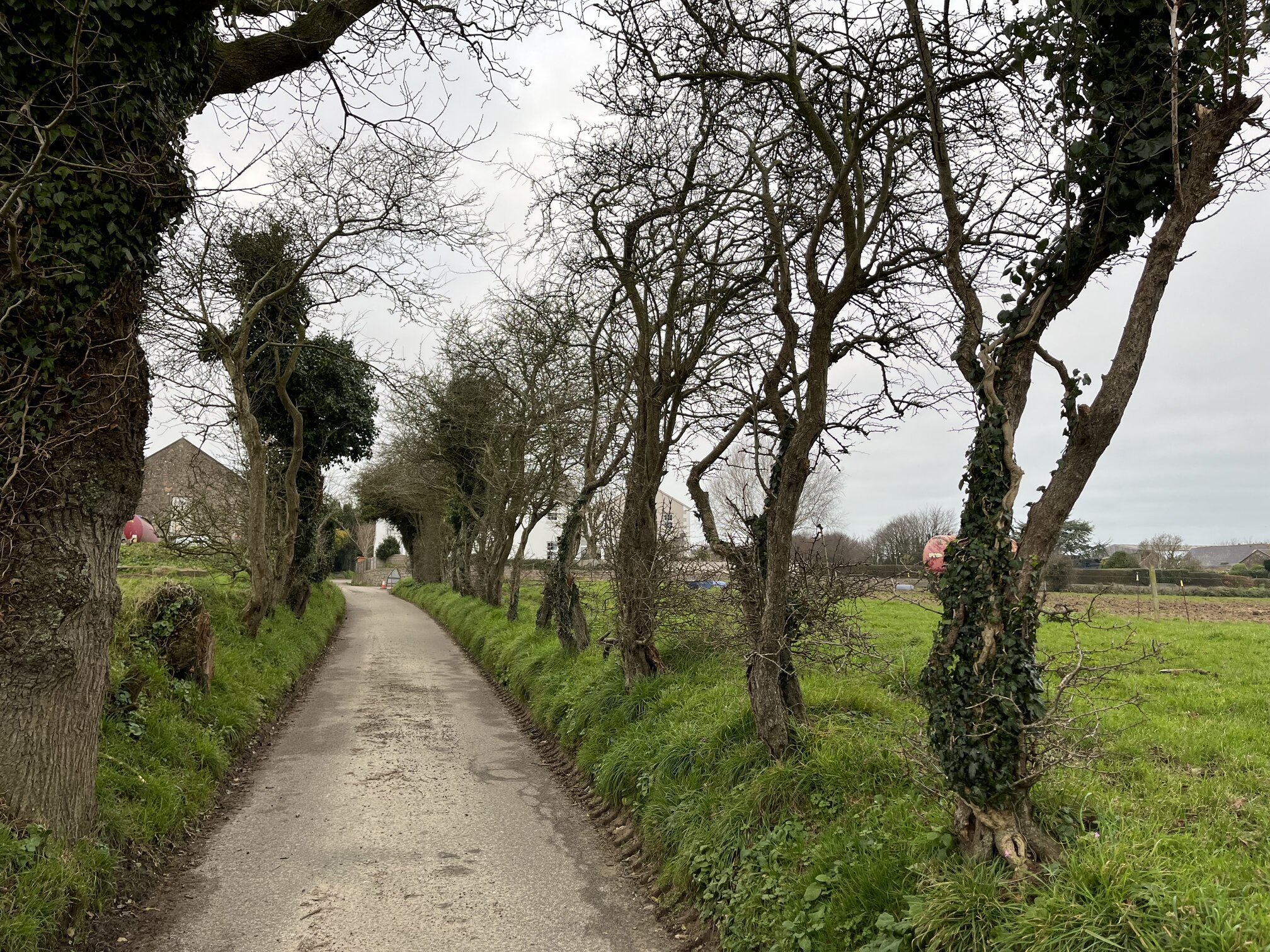 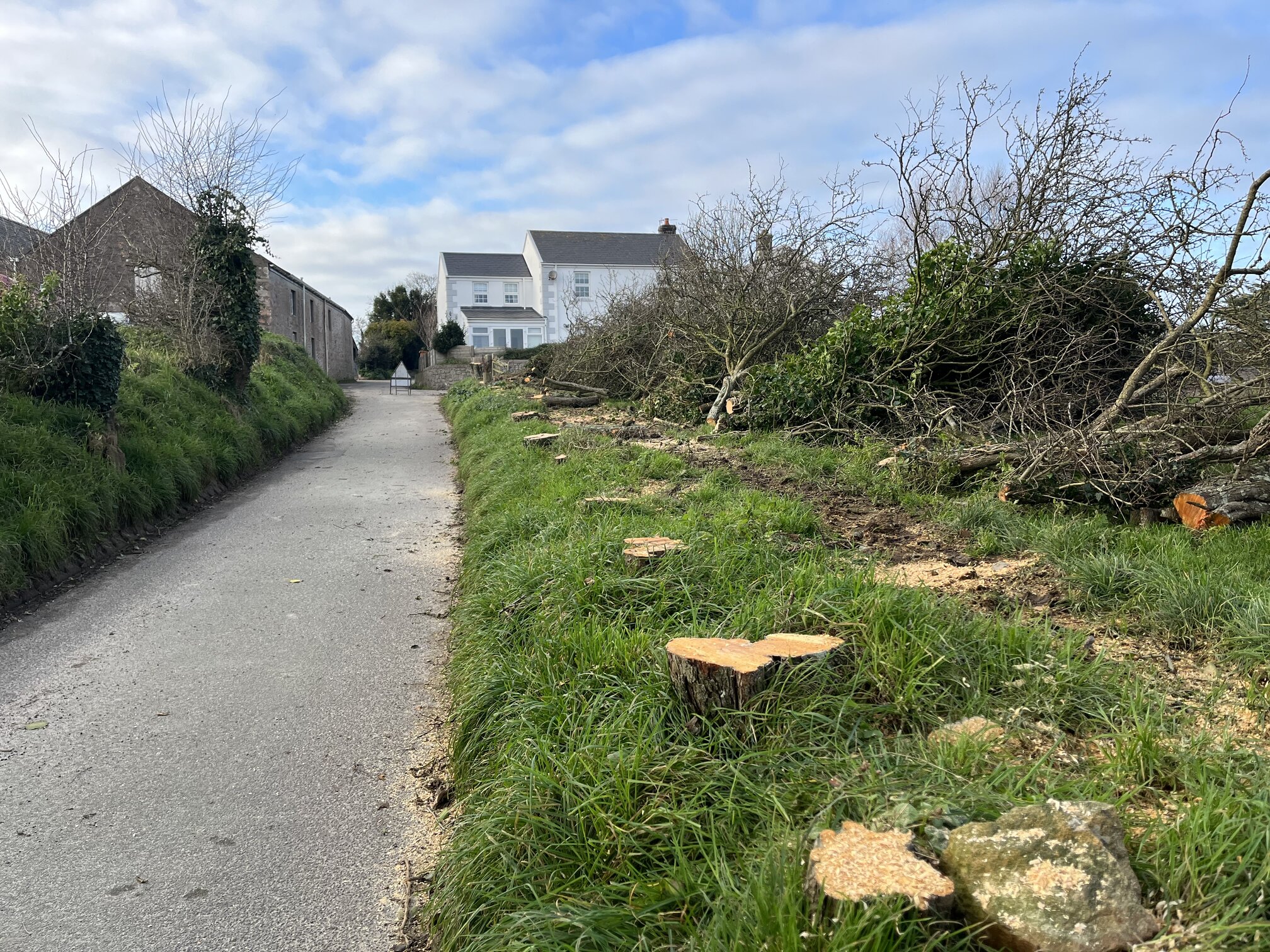 Pictured: How a section of hedgerow looks before and after coppicing.

The project has brought the farmers together with Jersey Trees for Life and Sangan Island Conservation as part of Jersey Dairy’s commitment to Linking Environment and Farming, or LEAF, an accreditation scheme promoting sustainable practices.

Piers Sangan, who is involved with the project, said: “We’re cutting the hedgerows down to about four inches off the ground so I appreciate that it might look a bit drastic. Also, although coppicing is used extensively elsewhere, it has not been a traditional practice in Jersey, so seeing cut-back hedgerows is an unfamiliar sight.

“But we ask people to bear with us to see the vast improvements this will bring to our countryside.

“Over the coming year, the cut stems will put on up to 1.5m of growth.”

He added: “Coppicing makes the hedgerow return denser and more resilient. It also requires less maintenance going forward and each section will be put on a three-year cutting regime. 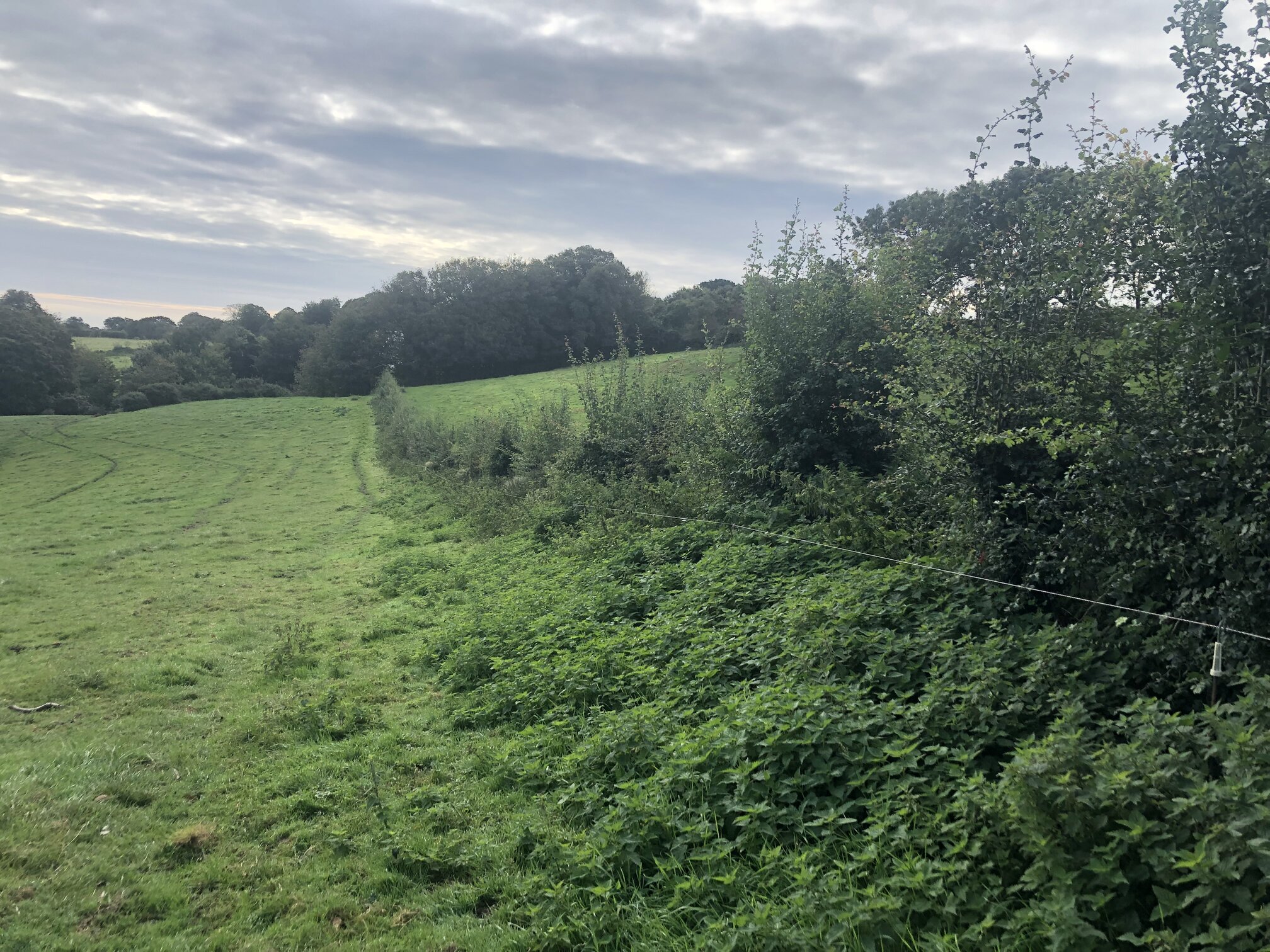 Pictured: How a hedgerow looks one year after coppicing.

“It’s worth remembering that hedgerows are not a natural phenomenon: they were all planted by mankind so they need to be maintained by mankind. If a hedgerow was left to grow it would become a line of trees.

“There are many positive benefits to coppicing including stronger hedgerows, more effective control of cattle and better carbon sequestration.”

So far, Mr Sangan and his team have cut down a total of 100m of hedgerow, the longest single gap being 70m. Most of the coppicing will be filling gaps in existing hedgerows rather than cutting down long sections.

Ten dairy farms around the island are involved in the project.

Posted by Bruce Willing on Dec 20th, 2021
This is a bit radical. Having seen fields being coppiced in Wales, you cut the trees nearly through and lay them along the length of the field you want to build or rebuild a hedge on. You then remove the upper branches and trim the side branches. The trees will then regenerate. Chopping them to the ground might create bushes but will not easily create a hedge.
Posted by Christopher McCarthy on Dec 21st, 2021
Agreed with last comment
Why didn't they plant some saplings in between the trees and once they're grown then out the Works Bruce suggested

If the cut down trees do not grow back ie

Over the coming year, the cut stems do not put on up to 1.5m of growth.”

This is their fault for not consulting with public like bruce

This action is an act of eco vandalism for the willife habitat
Posted by Roy Dean on Dec 21st, 2021
70 metres gap

You need to be smoking to dream that a coppiced tree will fill that gap
Posted by Mark Wilbourn on Dec 21st, 2021
Coppicing is an ancient way to manage trees. It works best with Hazel that is planted with this specific intent. They are harvested on a regular basis and produce materials for things like fences and brooms. This is not the same as felling mature trees, which do not frequently recover. The pictures look more like mature tree felling than coppicing.
Posted by Piers Sangan on Dec 21st, 2021
Thank you for your comments. Bruce you are talking about hedge laying which is another form of management that can be undertaken on hedges in suitable condition. Unfortunately our hedges are not in a good enough condition as such we are undertaking this coppicing and replanting work with the vision that in 10 years time we will be able to lay them.
Mr Mcarthy. Please see comments above and for your reference this work is being done with professional ecologists and experts in countryside management filling best practices.
Mr Dean I believe this is a miss type we are not dealing with any ‘gaps’ that large as that is the length of individual hedgerows we are dealing with. Any gaps between the coppiced stumps are being infilled with new whips to create a denser hedge line.
Mr Wilbourn all the hedgerows have been survey following best practice guidance over this year to determine the most suitable course of management many boundary features have been identified as tree lines and the management will be adjusted to accommodate that. In the example in the article the hedge line was identified as an overgrown hedgeline that was suitable to be coppiced and restored to a functional hedgerow.
If anyone has any further queries please feel free to email the address in the article.
To place a comment please login Login »

Calls for creativity as Flake shortage sends 'ripples' through Jersey