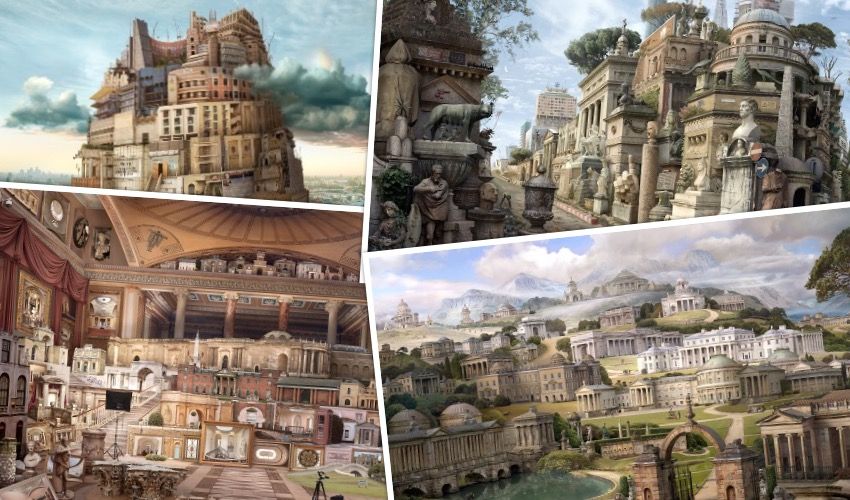 A Jersey-born artist who pokes fun at modern life by creating intricate 'digital collages' of old classics using contemporary images - including turning the Tower of Babel into a pile of unaffordable London homes - is celebrating her first major exhibition in her home island.

Emily Allchurch is currently displaying her works - a collision of Old Masters and 21st century life - at Private & Public Space.

Although she was born in Jersey and educated at Jersey College for Girls, 'Fact and Folly', as the exhibition is titled, is Emily Allchurch's first major exhibition in Jersey.

Emily studied Fine Art at the Kent Institute of Art and Design in Canterbury and the Royal College of Art in London. She has since established a global reputation for her complex and intricate photographic compositions. Her work was featured in solo and group shows in the UK and internationally, including the USA, Canada, Hong Kong, Japan, Singapore, Italy and Germany. 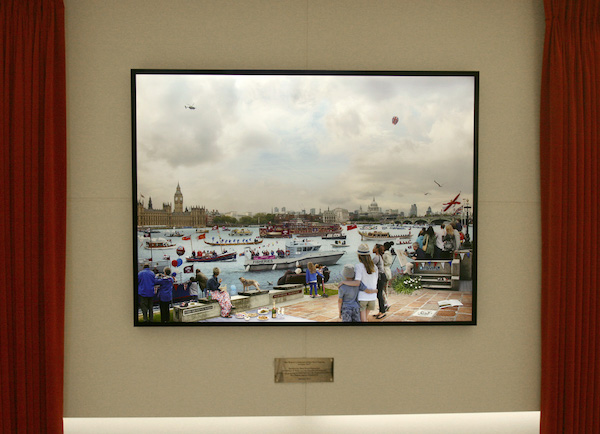 Pictured: Emily Allchurch was commissioned by the States to to record Jersey’s involvement in the Queen’s Diamond Jubilee Thames River Pageant.

While she has never had any solo exhibition in Jersey, one of Emily's light boxes 'Her Majesty’s Diamond Jubilee River Pageant', which was commissioned by the States, is on permanent display at the Royal Court.

Chris Clifford, Director at Private and Public space (formerly known as CCASM), has been following her career for the past 25 years.

"She is undoubtedly the greatest female artist Jersey has ever produced. Her artworks are held in major museum collections all over the world and her work has become highly collectable. She has dealers all over the world in London, New York and Hong Kong," he said of the artist.

"I am delighted that we are doing the very first show she has ever done in Jersey. It's an aberration that she's never had one before."

Chris explained that he had never met Emily until earlier this year, when they saw each other at the Islington Art Fair in February. They planned Emily's exhibition on the back of a napkin, sketching out where each work would go. "This exhibition was nine months in the planning," said Chris. "It was technically very complex and very challenging but also very enjoyable."

Pictured: Emily reinvents Old Master paintings through the use of photography and digital collage.

'Fact & Folly' consists of a series of 'lightboxes' - illuminated illustrations - displaying Emily's digital collages. She has become known for using photography to re-imagine Old Master paintings and prints from a contemporary perspective.

Chris explained: "Emily’s work is interested with representing old masters and making them into some sort of 21st century digital format. One of her lightbox pieces was inspired by Piranesi, an Italian Old Master who used to make what he called 'capriccios', fantasy landscapes.

"Emily created one for the 21st century in London. She goes out, she photographs the city over a two or three-week period. She takes literally thousands and thousands of digital images of columns and buildings, sculptures and statues, brings them all back into her digital studio in London and then remasters this vision for what London could be like in the 21st century. It’s a 21st century capriccio." 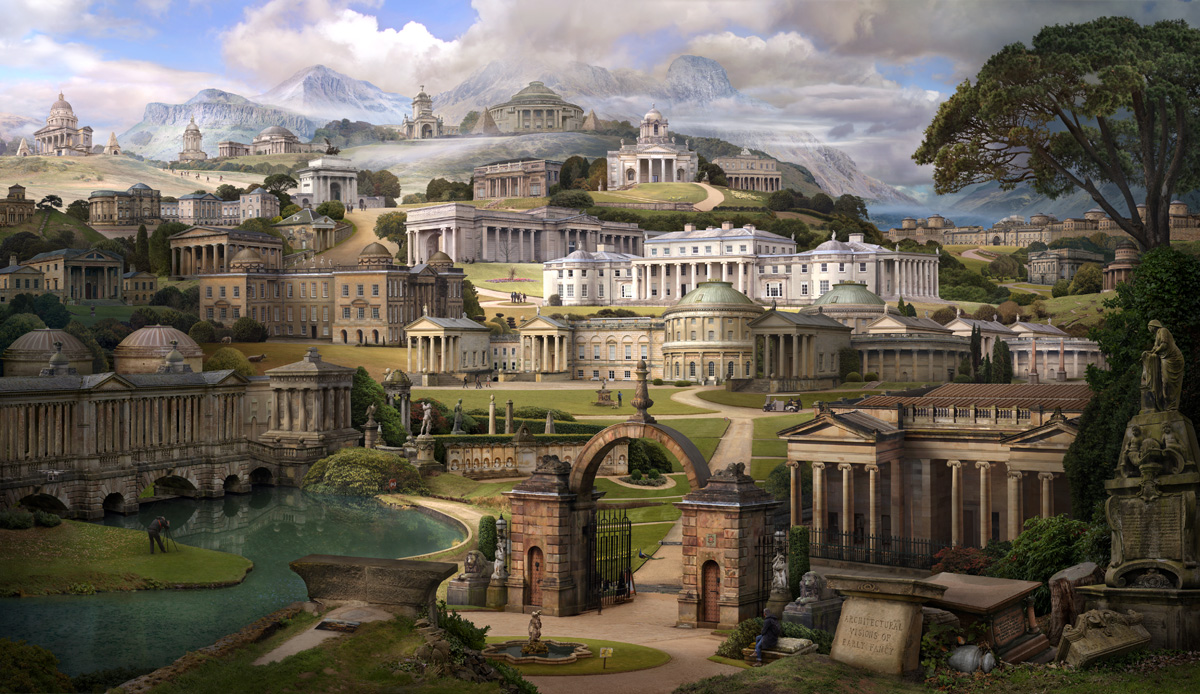 Pictured: Emily created 3D models of Sir John Soane's unbuilt projects for one of her collages.

Other pieces in the exhibition include homages to Sir John Soane, a 19th century architect known for building the Bank of England.

Emily digitally recreated a watercolour from Joseph Michael Gandy in which he painted every building Soane designed during his career. Her version, which includes modern additions such as a phone box and her photography equipment, features in the Soane Museum next to Gandy's.

Emily also went further in paying tribute to the architect. She researched the designs he had never built and created 3D models of them. She then photographed actual buildings to get a sense of the colours and textures. Once combined through hours of work in her studio, the models and photographs look eerily realistic. 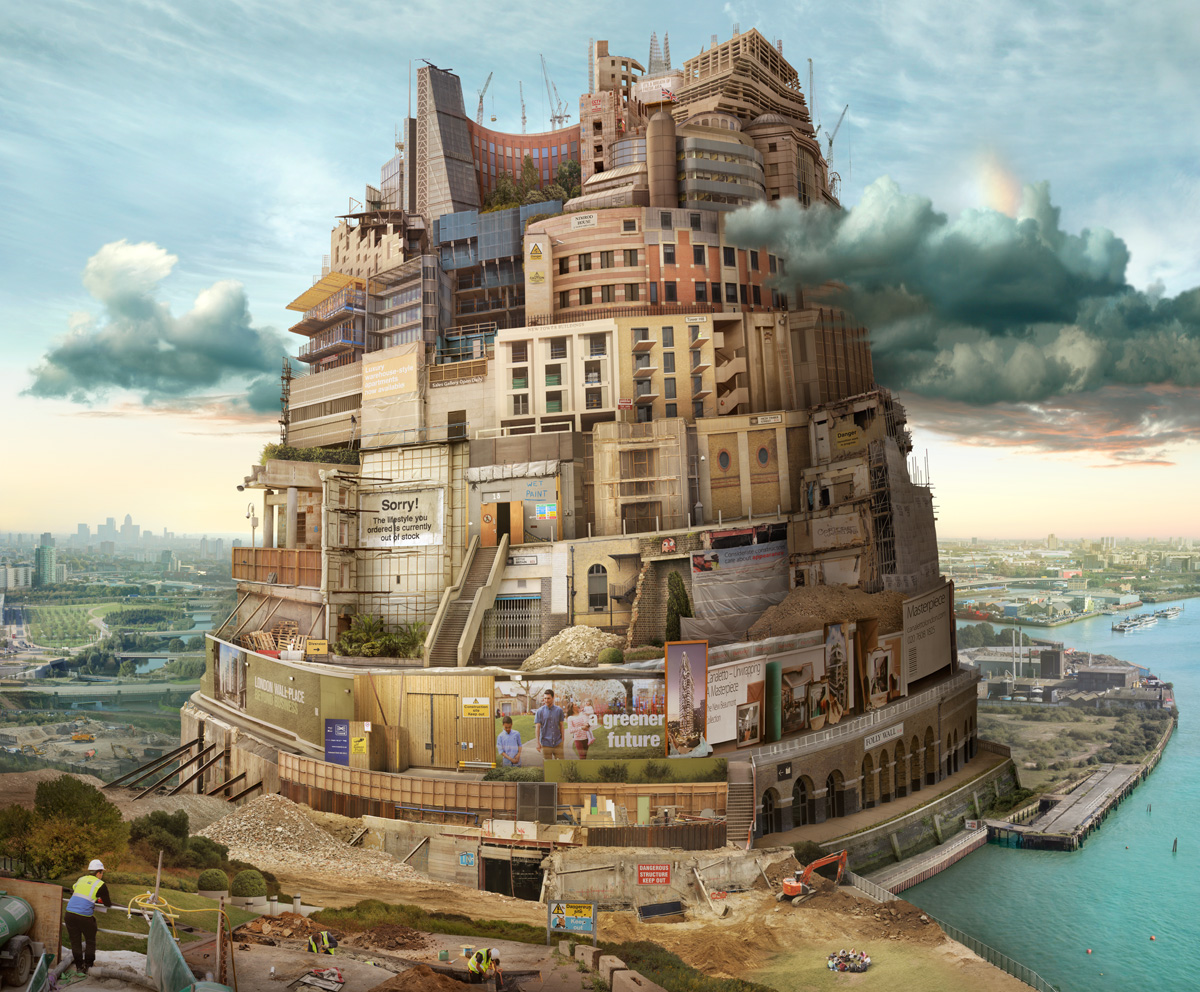 Pictured: Emily's 'Tower of London (after Bruegel)' is a reflexion on overdevelopment in London.

The artist also uses her collage to reflect on the world and how its changing. 'Tower of London (after Bruegel)' recreated Pieter Bruegel’s Tower of Babel from photographs of London. Where Bruegel’s image "mocks those who, according to the Old Testament, tried to reach God by building a tower to the heavens and were then divinely punished and made to speak in different tongues", Emily's collage shows a variety of construction sites and how they affected London.

Chris explained that the montage was a reaction to overdevelopment in London, which ultimately led the artist to sell her studio and move out of the capital. In fact, the 'For Sale' sign of Emily's own apartment features in the image.

'Fact & Folly' can be seen at Private & Public space in Sommerville House until 28 November.