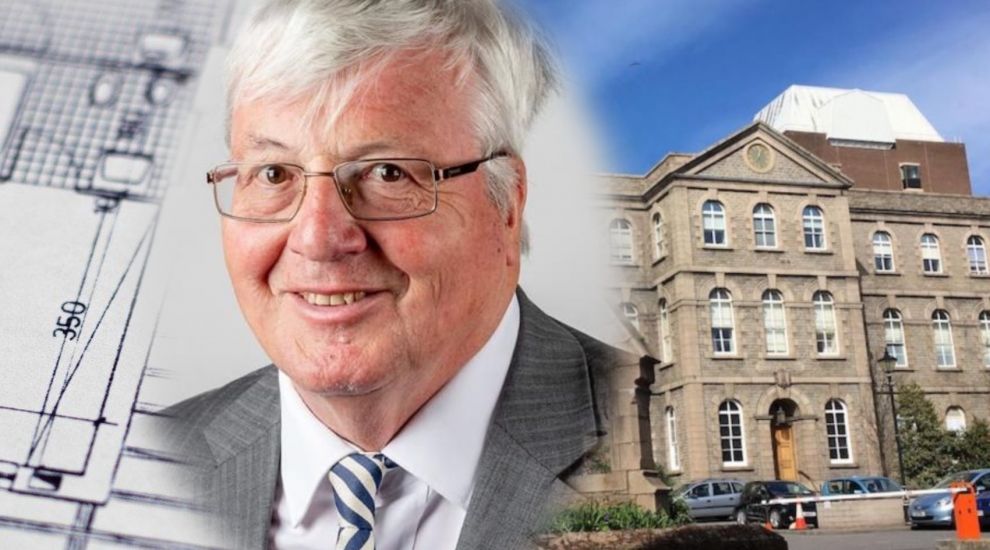 The Environment Minister has asked for a change in the law to ask others to have the final say on the future hospital planning application alongside him.

At present, major planning applications, like the future hospital, are assessed for their impact during a public inquiry.

An appointed independent planning officer then makes a recommendation on whether the application should be approved to the Environment Minister, who makes the ultimate decision.

But Deputy John Young is seeking to spread that burden among a larger group, including an Assistant Minister and the Chair of the Planning Committee.

The revelation came when the Minister was asked during this week’s States Assembly meeting whether he feels comfortable discharging the burden a second time.

Noting that it is a “high-pressure” situation, Deputy Young said that he had signed a Ministerial Decision instructing officers to draw up plans that would widen the planning law to allow others to be involved in major planning decisions.

While he was unable to provide an exact date for that work to be finished, he said he was hoping those plans would come before the States assembly for a vote this year.

Deputy Young became the second successive Minister to reject plans to revamp the current hospital last year, agreeing with the planning inspector that the resulting development would be “imposing and out of scale” with the area, and likely to  cause “unreasonable harm”.

The year before, his predecessor, Deputy Steve Luce, rejected the development on similar grounds, with the plans blasted as “over-dominant, obtrusive and alien.”

At the time, both Ministers spoke of the burden upon them in making their decisions, but claimed that they had been taken in the “public interest.”

Senator Moore asked Deputy Young during this week’s States Assembly meeting whether he felt content that enough work had been done to establish a public interest test in advance of any new application being submitted.

He replied that “enormous effort” had been put into producing supplementary planning guidance for the team developing the new hospital to follow in the hope that any new proposals carefully balance relevant factors.

Elsewhere in the meeting, Deputy Steve Ahier asked the Environment Minister whether he was aware of any protected species at Le Val André – the woodlands at the bottom of the Overdale site.

While the Minister said he was not sure, he noted that any planning application would have to accompany an environmental impact assessment.

He noted, however, that he had distanced himself from the site selection process as he has responsibility for the ultimate decision.

Posted by Denise Shrives on Sep 25th, 2020
Surely any body with a little sense can see that the only place for our new Hospital is Warwick Farm, land owned already by States,a decent main road already built and no homes need to be demolished. Arh! I hear the States say but we have leased this land to Jersey Hemp, I'm sorry but that just shows how little forethought the States members have put into the new hospital site. It really is the only place. We must preserve People's Park and if Overdale has to be the site why not build the access road through the Water Works land at the top of Westmount road. ?
Posted by Thomas Muir on Sep 28th, 2020
Fair play to Deputy Steve Ahier for asking the Environment Minister whether he was aware of any protected species at Le Val André – the woodlands at the bottom of the Overdale site. Deputy John Young's response is quite frankly amazing - stating that he was not sure, noting that any planning application would have to accompany an environmental impact assessment but saying that he had distanced himself from the site selection process as he has responsibility for the ultimate decision. Surely, if there is an obvious environmental issue with Val Andre - (which I highly suspect there is as it is teeming with wildlife - red squirrels, bats, many birds including owls, toads, etc.) - then the environment minister should have made himself aware of this and should have been supplying the people making the hospital shortlist with this information! Do your job Deputy Young and spend your energy researching this issue rather than trying to shirk your responsibilities. There is a reason why the environment minister is supposed to have the final say on developments such as the hospital. Involving others with vested interests is a surefire way of destroying Jersey's environment!
To place a comment please login Login »