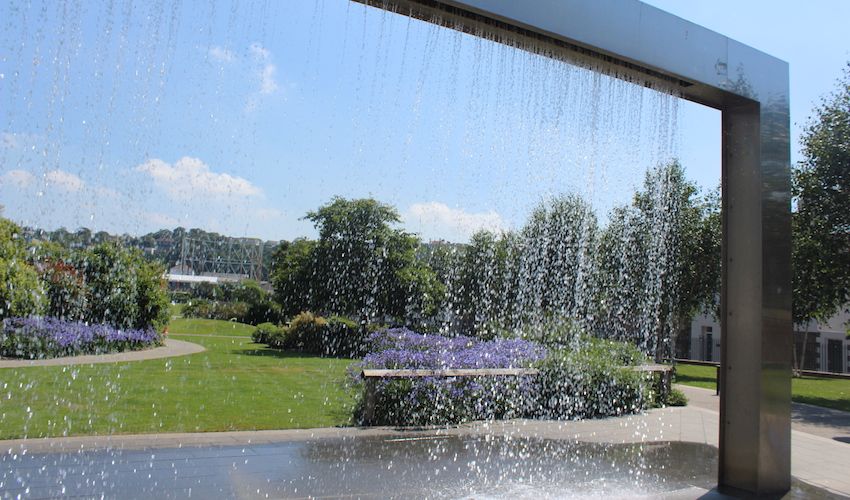 A 45-year-old man is in custody after being arrested in Millennium Park and charged with breaking one of the new 'lockdown' laws.

Police said in a statement this afternoon: "A 45 year old male has become the first person in Jersey to be charged under the Article 5 of the new Covid-19 (Screening, Assessment and Isolation) (Jersey) Regulations 2020.

"The male was arrested in Millenium Park on the afternoon of Saturday 4th April and was charged and remanded in custody to HMP La Moye to appear before the Jersey Magistrate on Monday morning."

They later confirmed that the individual was Jade Hamon, a Jersey resident.

The law the charge relates to states: "A person must not, unless an exception applies, without reasonable excuse go into or remain in a public place during a period of restricted movement."

The arrest came just six days into 'lockdown', which began at 08:00 on Monday, introducing a series of strict new curbs on island life.

The new rules are as follows.

Ahead of the sunny weekend, the government issued a number of warnings urging islanders not to flout the rules despite the weather. Three came in the form of text messages. 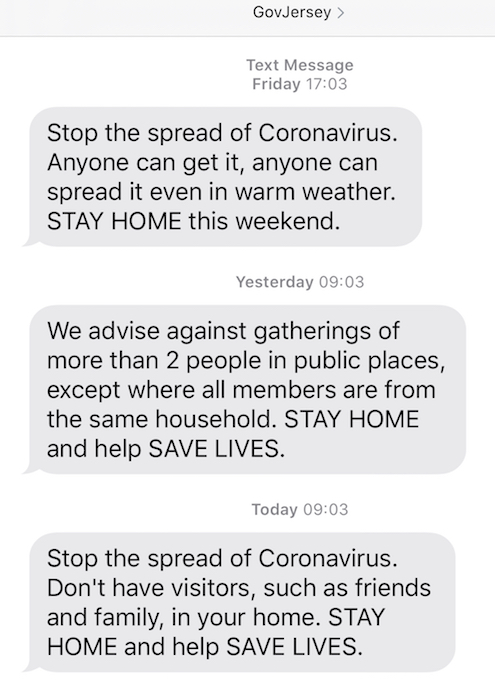 Pictured: Reminder text messages from the Government of Jersey.

Chief Meteorologist John Searson also warned: “The temperature is forecast to hit highs of 17 degrees on Sunday, which is unusually warm for this time of year. I understand that many Islanders may want to ‘make the most of it’ and spend time outside.

“However, warm weather is no protection from corona virus. If you are going out of the house during your two hours, think carefully about the best time and place to go. You don’t want to endanger yourself or others by going to popular areas, where you might compromise your two meters social distance.”

While Police have been legally given the ability to arrest and detain individuals who do not follow the rules, Police Chief Robin Smith said members of the force hoped not to have to use their emergency powers.

In an open letter to islanders issued on Friday, he said the Police's main approach would be to "engage" and "explain".

A number of officers were sent on patrol at hotspots, such as beaches and parks, to break up any mass gatherings and to ensure islanders adhered to social distancing principles.

This evening, Police said: "Thanks to everyone who stayed home this weekend and away from the beaches and beauty spots for anything other than their exercise.

"We know it's hard, especially when the weather is so nice."

However, they added: "Disappointed, though, that we had to arrest one man for flouting the rules."

Posted by Philip Hudson on Apr 6th, 2020
At first sight these new laws look draconian for a small island, the authority (gov.com) and the police walk a fine line, lose the respect of the people and it will all fail....... one detail in the story, temps of 27c. and the virus starts to die surfaces above this temp and the virus is unlikely to be found there.
Is there a big over-reaction to this crisis (it is a serious question) shutting ports and airports down is essential, testing as people arrive in the island is crucial and quarantine for these people is crucial. This virus was brought to the island by travellers, in the very beginning it obviously was not resident in the island.
To place a comment please login Login »