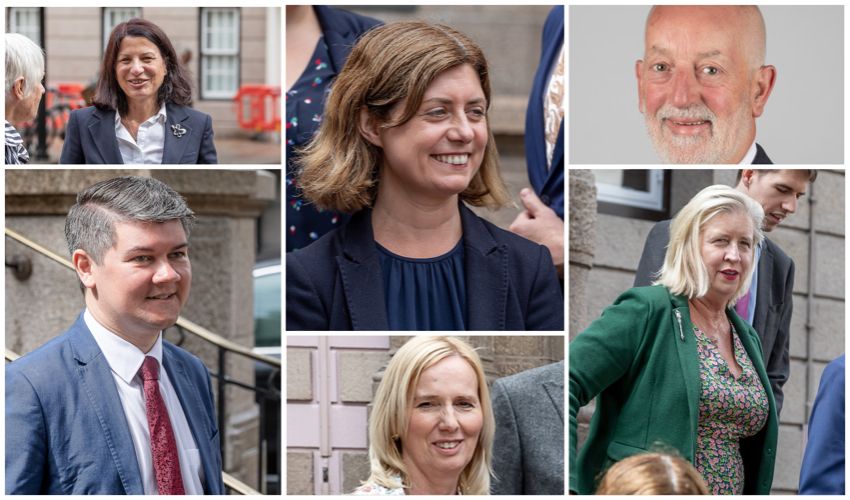 States Members have this morning been appointing the heads of the backbench panels which will scrutinise the work of the new Council of Ministers.

Here's who has been appointed so far...

Reform Jersey leader Deputy Sam Mézec has been appointed head of the backbench panel which scrutinises policies and laws proposed by the Chief Minister and Treasury Minister.

Deputy Mézec was elected Chair of the Corporate Services Panel – a group of politicians and non-elected members which has a key role reviewing pivotal initiatives such as the Government Plan and Common Strategic Policies.

The previous holder of the role was now-Chief Minister Kristina Moore.

Explaining why he should get the job, Deputy Mézec drew on his track record as a scrutineer, which not only demonstrated his ability to be open and constructive with ministers but also his ability to separate his political convictions from Scrutiny work.

Also, on Tuesday morning, St. Martin Constable Karen Shenton Stone was elected Chair of the Privileges and Procedures Committee, who manages the internal business of the Assembly.

She defeated its Chair of the last political term, Deputy Carina Alves, by 28 votes to 21.

She said: “It is of fundamental importance that we review the strengths and weaknesses of our new electoral system, and consider its alternatives.

“This, of course, includes Deputy Gorst’s proposition on restoring the Senatorial mandate.

“The new system has delivered welcome change in the composition of the Assembly but failed in increasing voter turnout.

“Many people have voiced frustration at the loss of the island-wide mandate and the differing number of votes an individual may have depending on where they are registered.

“I do not want to immediately commit to any revised system due to the lingering questions over its composition, voting system, and other related concerns.

“Instead, we need to give Islanders the opportunity and the agency to discuss, consider and shape Jersey’s electoral system in a way that guarantees a genuine solution that satisfies both islanders, international standards, and our commitments to diversity and inclusion.”

Deputy Lyndsay Feltham was elected unopposed as Chair of the Public Accounts Committee – the panel which reviews public finances, working closely with the Comptroller and Auditor General.

She said: “I am sure that we all want our public sector to continuously improve its service delivery.

“As Chair of PAC, one of my priorities would be to follow up on recommendations made by the Comptroller and Auditor General and ensure that Directors General are implementing actions to address them.

“An essential first step for the new Chair will be to establish the committee; I would take an inclusive approach to build a team that has the breadth of experience required to fulfil the duties of the committee.

“The opportunity to join the committee as a lay member must be well publicised so that we can attract the best candidates.”

Finally on Tuesday morning, former Environment Minister and member of the Progress Party Deputy Steve Luce was elected Chair of the Environment, Housing and Infrastructure Panel, defeating Deputy Rob Ward by 24 votes to 21.

On Tuesday afternoon, Deputy Geoff Southern was chosen without opposition to chair the Health and Social Security Panel.

The final decision of the sitting was to appoint a Chair of the Planning Committee. Trinity Constable Philip Le Sueur, who led the committee in the last Assembly, was re-elected by 28 votes to the 17 of Deputy Montfort Tadier.

States Members will return to the Assembly for the final time before the summer recess next Tuesday to appoint committee and Scrutiny panel members.

Posted by Jon Jon on Jul 12th, 2022
Can see Mezzo sharpening his blade already,Moore will know what it feels like to be scrutinised ,Luce over seeing Planning again!
Posted by Paul Troalic on Jul 13th, 2022
S'funny you should credit Karen Shenton- Stone with 'inventing' NOTA because that is clearly untrue.
I suggested this in the JEP some 10 years ago but no one was interested. A case of NOISI I suppose. No One Is Interested.
To place a comment please login Login »