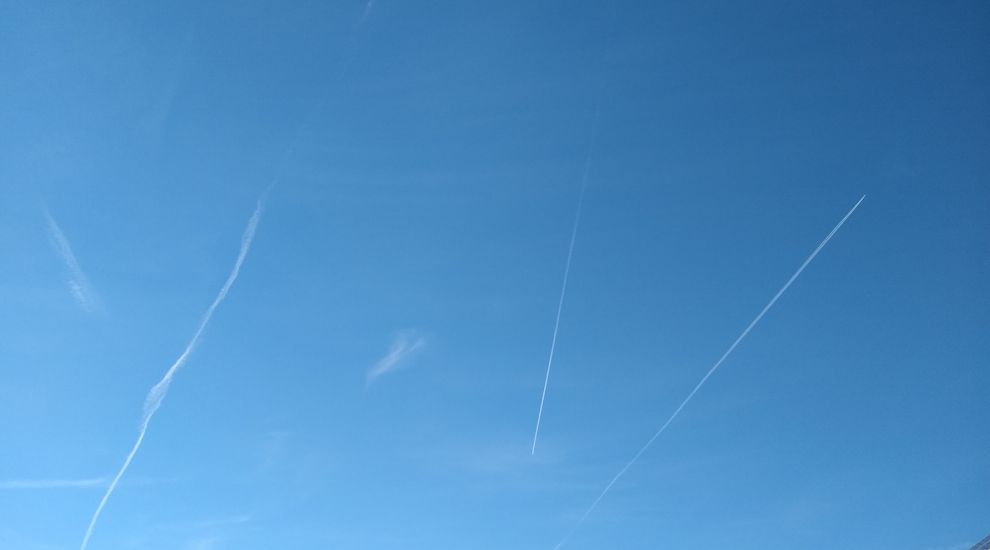 Saturday was an historic day for the Airport, but for all the wrong reasons. On very few days in the post-war era - apart from Christmas Day and during the depths of lockdown - have there been no scheduled commercial flights in or out of the Island.

Fog and snow have closed the Airport for days in the past but on Saturday the arrivals and departures’ boards were blank. Inter-island flights never stopped for a full-day even when the volcanic ash cloud disrupted flying across northern Europe in 2010.

Understandably, Ports of Jersey closed the main terminal for the day.

It is a stark reminder of the challenge facing the Airport - indeed, all airports - caused by the global pandemic.

Just two commercial operators are currently flying to and from Jersey: Government-supported Blue Islands and EasyJet. British Airways has suspended flights to Heathrow and is due to return over the first weekend of December.

Again providing some sobering history, this is the first time that the national flag carrier has not provided a service to Jersey since its creation through the amalgamation of BOAC and BEA in 1974. And before that, BEA had regularly served the Island since 1947, when it incorporated Jersey Airways.

BA was close to pulling out when it retired its Viscount fleet in the early 80s, but even when the runway was resurfaced over the winter of 1965/66, BEA brought in a Sikorsky helicopter to fly passengers to Guernsey, where they connected with a Heathrow flight.

In short, BA and its predecessors have been a regular feature of Jersey’s aviation history for seven decades.

Pictured: BEA bought in a Sikorsky helicopter to Jersey to maintain services in the mid 60s.

Passenger figures leave no doubt as to why commercial air transport is facing its biggest existential threat. The latest statistics show that, in September, 60,431 passengers arrived at the Airport - a 74.6% decrease on the year before. Overall, passenger numbers are down about 90% year-on-year.

Gatwick, our principal link with London, saw an 80% decrease (although BA were flying to Heathrow by then), while Southampton was down 77% and Liverpool 71%.

At the moment, in a month which is traditionally quiet anyway, it is not uncommon for a 180-seater aircraft to arrive more than two-thirds empty. It is hardly surprising with most of the UK currently in lockdown and everywhere, save the north of Scotland, painted an ominous red.

Ports of Jersey has the advantage of being Government-owned and the Airport is considered a strategic asset by its owner - something that many privately owned UK regional airports don’t enjoy - but still it is suffering. 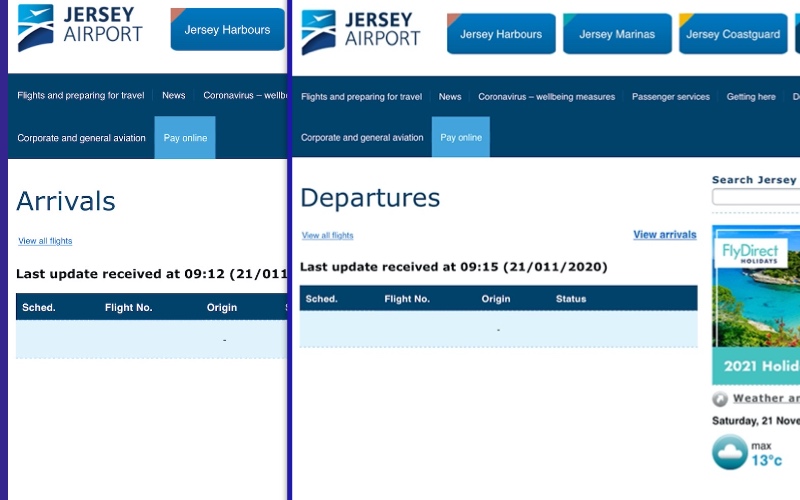 Pictured: The blank arrivals and departures screens from Saturday.

Its CEO, Matt Thomas, didn’t try to gloss over the challenges when he announced last month that the incorporated company was making 65 roles redundant to save £3m a year. That equates to 15% of Ports’ 420-strong workforce.

Although BA has temporarily departed, EasyJet continues to fly between Jersey and Gatwick three or four times a week, with its schedule due to pick up next month. However, its stoic perseverance may be less to do with loyalty than it is to do with the need to rotate its crew and aircraft based at its major Gatwick hub.

To keep both airworthy and current, it's far more efficient to fly to an airport 40 minutes away than it is to, say, the south of France.

The airline’s woes were made abundantly clear last week when it posted a £1.3 billion full-year loss, its first descent into the red in its 25-year history.

Although the company added that sales had surged by 50% after news of a credible vaccine broke, the pandemic still casts the whole EasyJet model into doubt. Reliance on speedy turnarounds to keep its aircraft in the air, the covid legacy could be a requirement for deeper, and longer, cleaning between flights. And will airports be able to offer the deep discounts that low-cost operators like EasyJet demand in return for passenger volume?

Blue Islands too has seen a fall off in passenger numbers but the airline has been boosted by a £10m loan by the Government, to be repaid over six years. In return, Blue Islands has moved its main base and fleet from Guernsey to Jersey.

Pictured: Could the Government support Blue Islands further by taking a stake in the airline?

Although the terms of the loan haven’t been revealed, before the deal was signed, Treasury Minister Deputy Susie Pinel said that a ‘convertible loan’ was being considered, meaning that the Government could be paid back through shares in the business instead of by cash.

As if it wasn’t already, that would confirm Blue Islands as, in effect, Jersey’s ‘national flag carrier’, similar to Aurigny in Guernsey, which is fully owned by its government.

In aviation terms, £10m is not a huge amount, so if Blue Islands did need a top-up, it could mean the people of Jersey owning even more of the airline. The Government has also recently announced that taxpayer-funded 'essential' flights will soon resume. Last operated at the end of full lockdown, the Government then paid the airline £15,000 to fly to and from Southampton three times a week, and a weekly Gatwick service was added in May.

In the midst of the covid disaster for commercial aviation, Ports has just announced that it has secured a £40m loan from two banks, in the form of a ‘revolving credit facility’, to pay for capital projects, which include significant changes at the Airport to build a new arrivals floor within the existing main terminal.

Now is, of course, a good time to borrow, but it is still a time of risk for airports, even with the promise of an imminent vaccine. No one knows how quickly the airline industry will bounce back and what will be the demands on airports from airlines - will it be even more discounts, a share of parking revenues, or carriers insisting that “you pay us to fly to you”?

Ports want to see more European travellers, but what will be the impact of Brexit - with every passenger having their passport checked on arrival, an end to identity cards and exchange rate volatility? And growth depends on local bed availability - will hotels, already struggling to survive, want to stay in the business if more profitable alternatives exist?

Industry experts say that one outcome of the pandemic is likely to be the return of the package holiday, with travellers finding comfort in having everything arranged beforehand, therefore Ports’ agreement with Jet2 and its associated tour operator Jet2holidays for next summer is the right move.

It also provides security for British travellers unsure of the implications of holidaying in the EU. The ease of direct flights for islanders will also be attractive, but growth is limited to expanding the local market.

The potential return of Flybe - now in the hands of a hedge fund - is also a source of optimism, but the details of its rebirth, promised in early 2021, are far from clear.

The Airport is obviously right to start planning for the post-pandemic world, but it may be wise to occasionally look back to the arrivals and departures boards of Saturday 21 November 2020 as a reminder that things may never get back to ‘normal’ for a very long time, if at all.