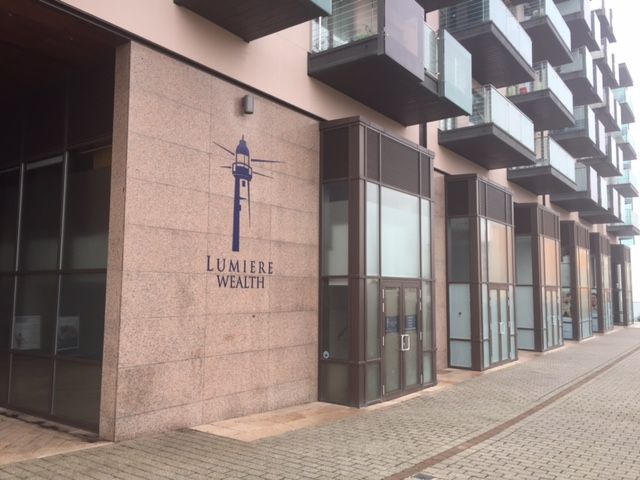 A retired teacher in her 60s has told the Royal Court of her anxiety at learning an £165,000 investment intended to provide a house deposit for her son might not be as ‘safe’ as she was led to believe by a former financier now on trial for a £2.7m alleged fraud.

The accounts came on the third day of the trial of 50-year-old Chris Byrne, the former CEO of Lumiere Wealth Limited, which was based at Castle Quay.

Led by Advocate Simon Thomas, the prosecution allege that Mr Byrne failed to tell clients that their money was going into a high risk venture. It’s also claimed that he didn’t tell them that the company, Providence, had a 75% stake in Lumiere, and that he was receiving commission and special bonuses for selling the investments. Mr Byrne denies the charges.

On Tuesday, the Court heard from a widow in her late seventies with failing eyesight, before adjourning for one day. Yesterday, evidence was given by three more witnesses: two investors and a former boss of the accused.

Pictured: It's claimed the boss of Lumiere Wealth wasn't upfront with his clients.

The first was a retired nurse who’d invested £200,000 with Lumiere. She told the court she’d been put in touch with Mr Byrne by a mutual friend who’d been his boss when he worked in a local bank when he first moved to Jersey from Ireland. The friend said Mr Byrne was highly thought of and knew the business well.

After a series of breakfast meetings, she agreed to invest a considerable amount of her savings. It’s claimed that Mr Byrne wasn’t in a position to give her financial advice because he hadn’t yet been approved by the Jersey Financial Services Commission. It’s also claimed Mr Byrne didn’t tell her all the facts, in particular that factoring in Brazil – the chosen moneymaking method - is considered by most financial advisors to be a ‘high risk’ investment.

Next to give evidence was one of Mr Byrne’s former bosses, and the friend of the earlier witness who’d put the two of them in touch. He told the court he’d been involved in the finance business for a very long time and was very experienced. He painted a glowing picture of the accused saying that “he was the best performing, most highly rated” member of the team. He went on to say he’d never had a complaint about him, “which is more than I can say about the others.” Mr Byrne was, he said, “respected for matching the right client with the right investments” and had an unblemished record.

The witness then told the court he’d been present at one of the breakfast meetings between Mr Byrne and the former nurse, but that he’d viewed it more as a social catch-up. He was keen to find out how successful Mr Byrne’s recent fact-finding mission to Brazil had gone. It was many months later before he heard from the woman again, and was surprised by her relaxed tone when she apparently told him: “It looks like I’ve lost all my money – you live and learn.”

The final witness of the day was another investor: a retired teacher in her sixties. Together with her late husband, also a retired teacher, they’d invested £165,000 with Lumiere - £50,000 of which belonged to their son. He’d inherited the money from a relative and it was intended to provide the basis for a deposit on a house in the future.

The family had known Mr Byrne for a long time and trusted him. Acting on his advice, the witness says she bought in, and for the most part was happy. She says it was only when she received a booklet from Providence saying it “appreciated that the current [financial] climate is difficult” that she became anxious.

She called Mr Byrne for an explanation and he reassured her that things were ok. It was only when she got a call from the Jersey Financial Services Commission to go and see them did she know “things had gone wrong.”

The case is being heard by Royal Court Commissioner Sir John Saunders and Jurats Charles Blampied and Robert Chistensen. It continues today and another three witnesses are expected to give evidence. The trial could last up to six weeks.