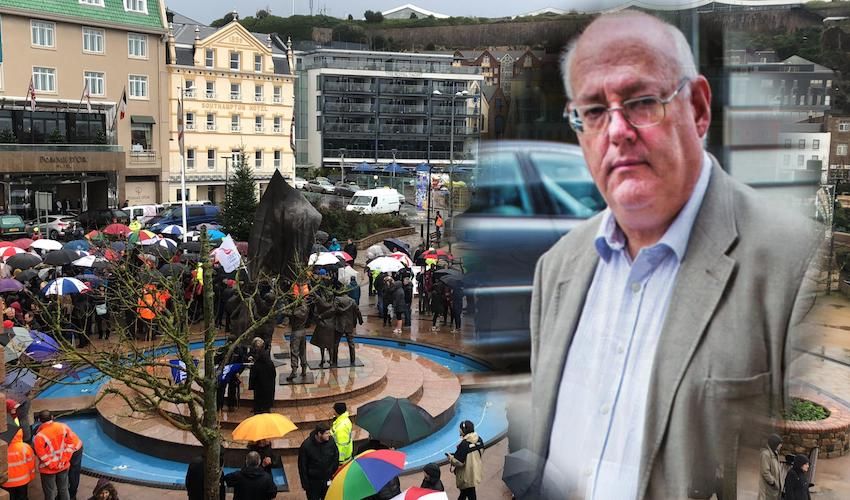 “Furious” Customs and Immigration officers, teaching assistants and other civil servants are planning whole days of strike action next week as the deadlocked pay dispute enters its fifth month.

Jersey’s civil service unions have announced plans for substantial strike action on Monday and Tuesday next week, throwing down the gauntlet before the so far unbending States Employment Board (SEB).

In a move that will escalate the embittered pay row even further, members of Unite the Union and JCSA Prospect have taken the joint decision to launch a second series of strikes after claiming a “complete silence” from the States on the matter of securing pay rises in line with the cost of living.

Pictured: Customs and Immigration officers will be amongst those striking for a whole day next week.

In the lead up to the strikes, union members have been advised to intensify action short of a strike. Many are already only attending work on a 'work to rule' basis, with plans now in place to further strip back goodwill gestures by failing to complete any overtime - whether paid or unpaid - and refusing to accept any work schedule changes without at least seven days' notice.

Details of how the strike will be organised are still being finalised, but Nick Corbel, Regional Officer for Unite the Union Jersey, said that they are looking at setting up picket lines outside workplaces. He also confirmed that striking staff members will be holding a demonstration in the Royal Square on 15 January.

At the heart of the ongoing dispute is the fact that many civil servants objected to their annual pay offer from the States as they say it is not in line with the cost of living.

Mr Corbel told Express that “there has been nothing” by way of negotiation from the SEB, likening their lack of engagement to “complete silence” since the previous, two-hour strike in early December.

Pictured: Both of Jersey's civil service unions have taken the joint decision to strike again next week.

However, Mr Corbel says he is hopeful that these lengthier strikes will change that: “The sensible thing to do would be to talk these issues over. Nobody wants this. This is going to impact on the public and nobody wants to see that."

The union representative added that the SEB’s approach to the pay dispute is “going to have a bearing on our relationship with the employer.”

The stilted negotiations between the States and the unions resulted in Senator Tracey Vallois resigning from her post as Assistant Chief Minister and Chair of SEB after she abstained from the vote in the States Chamber about whether government coffers should be raided to supplement the 2018/19 pay offer.

Senator Vallois’ resignation has left the Chief Minister in charge of the SEB, but Mr Corbel says that he hasn’t heard anything from Senator John Le Fondré despite notifying him of the further strike action planned for next week.

Mr Corbel said: “I feel that it’s incumbent on him to become involved in this matter and use his best endeavours to help resolve this dispute. He should be meeting with us.”

Meanwhile, the States issued a statement appearing to maintain their previously-held position that “there is no more money” to increase the pay offer for civil servants.

The statement reads: “We are disappointed at the unions’ decision to call for limited strike action among civil servants. We will consider the implications for the potential impact on public services, alongside confirming the contingency plans that are in place to minimise those impacts.

“We have negotiated over several months and have explained to unions why there are financial constraints on public sector pay. With a looming budget deficit, we can’t afford to increase that deficit - or to raise taxes - to pay for bigger pay rises for civil servants.

“We have also clearly explained that civil servants are, in general, significantly higher paid than other groups of employees, which is why we have offered higher pay settlements for lower-paid nurses, midwives and manual workers than for civil servants. These facts, and the government’s approach, have not changed."

The statement continues: “It is disappointing that the unions are taking their members out on strike, as we would not want staff to lose money when the island’s financial position has not changed, and there is no capacity for a higher pay offer.”

When asked whether there was an appetite for strike action beyond that planned for next week if the States continue to maintain this position, Mr Corbel said: “The action that has already taken place is unprecedented.”

He described the members of his union and of JCSA Prospect as having “been backed into a corner” and “furious about the way they have been treated by the States of Jersey.”

“So, yes,” Mr Corbel concluded, “the action will continue.”

Posted by Peter Huntingdon Bewers on Jan 11th, 2019
Pay unrest in the Public Sector must be of great concern to everyone, especially as it is generally felt that the wage and salary scales paid by the States of Jersey have always been very good , and in most instances higher than paid in the Private sector and with out the pressure of Work plus great Job security that is unknown in that sector of employment. Therefore it is alarming to see such unrest. The People concerned complain that the pay increases over the past ten years were below the rate of inflation ! but that has happened to everybody . it was caused as we all know by the financial slump, and thankfully due to good financial reserves held , Jersey has come through very well, but now is the time to try and replace those reserves as the future is unsure for all of us , especially with the U.K possibly leaving the E.U. and the financial downturn that could bring for us all. Sound financial management was what this new States Assembly was elected on , and the public expect them to deliver. to save next to nothing from one year to the next is not a sound Policy.
To place a comment please login Login »