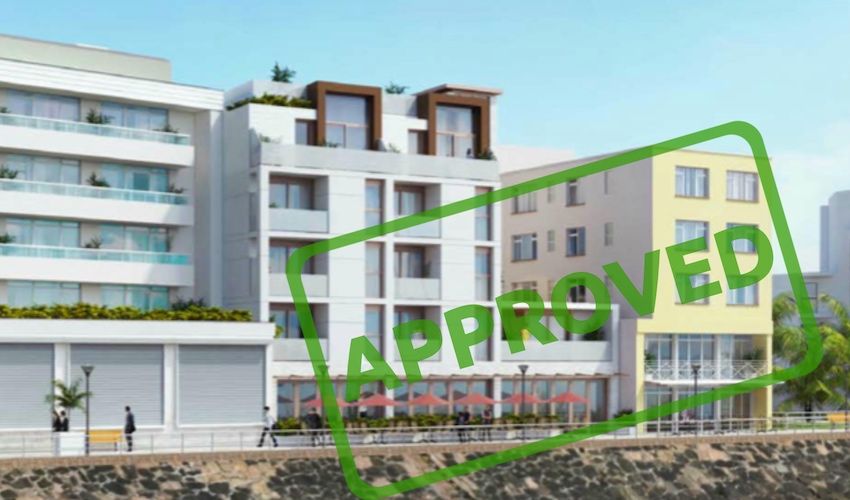 A once-popular coastal restaurant will soon make way for a five-storey apartment block after the Planning Committee unanimously approved it - despite protests from a former government planning officer.

Mevanna Prestige Limited's plans for the Caribbean Vibz premises on Havre des Pas promenade had been previously pulled amid neighbour concerns, and then rejected by the Planning Committee due to fears it would be harmful to nearby residents.

The initial planning application, submitted in January 2018, was withdrawn over fears the development would drive away visitors to the area, lead to increased traffic, and make the area "soulless". 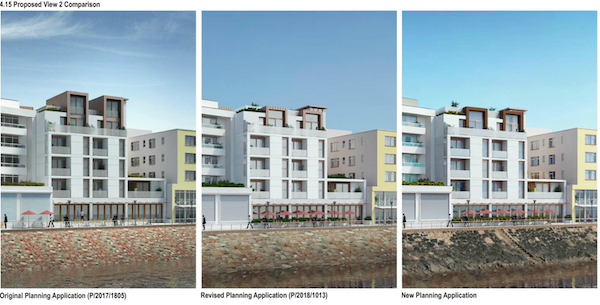 Pictured: The third version of the plans has been approved by the Planning Committee.

Taking into account the various public representations received, which included a letter from the National Trust and the owners of the neighbouring Marina Metro Hotel, Mevanna presented updated plans for the 20 flats - 19 one-bedroom flats and one two-bedroom flat – replacing the private gym and pool, with a ground floor café and an al-fresco area open to the public.

However, those changes were not enough to gain the approval of neighbours or of the Planning Committee, which eventually rejected the plans due to concerns over the impact the building would have on its neighbours, particularly the Marina Metro Hotel.

To answer those concerns, Mevanna scaled down the number of flats to 17 - 10 one-bedroom and seven two-bedroom ones – and scrapped the mezzanine levels on the fifth floor to reduce the overall height and size of the building.

The building was also set back further and the windows to the east obscured with glazing as per the conditions recommended by the Committee. 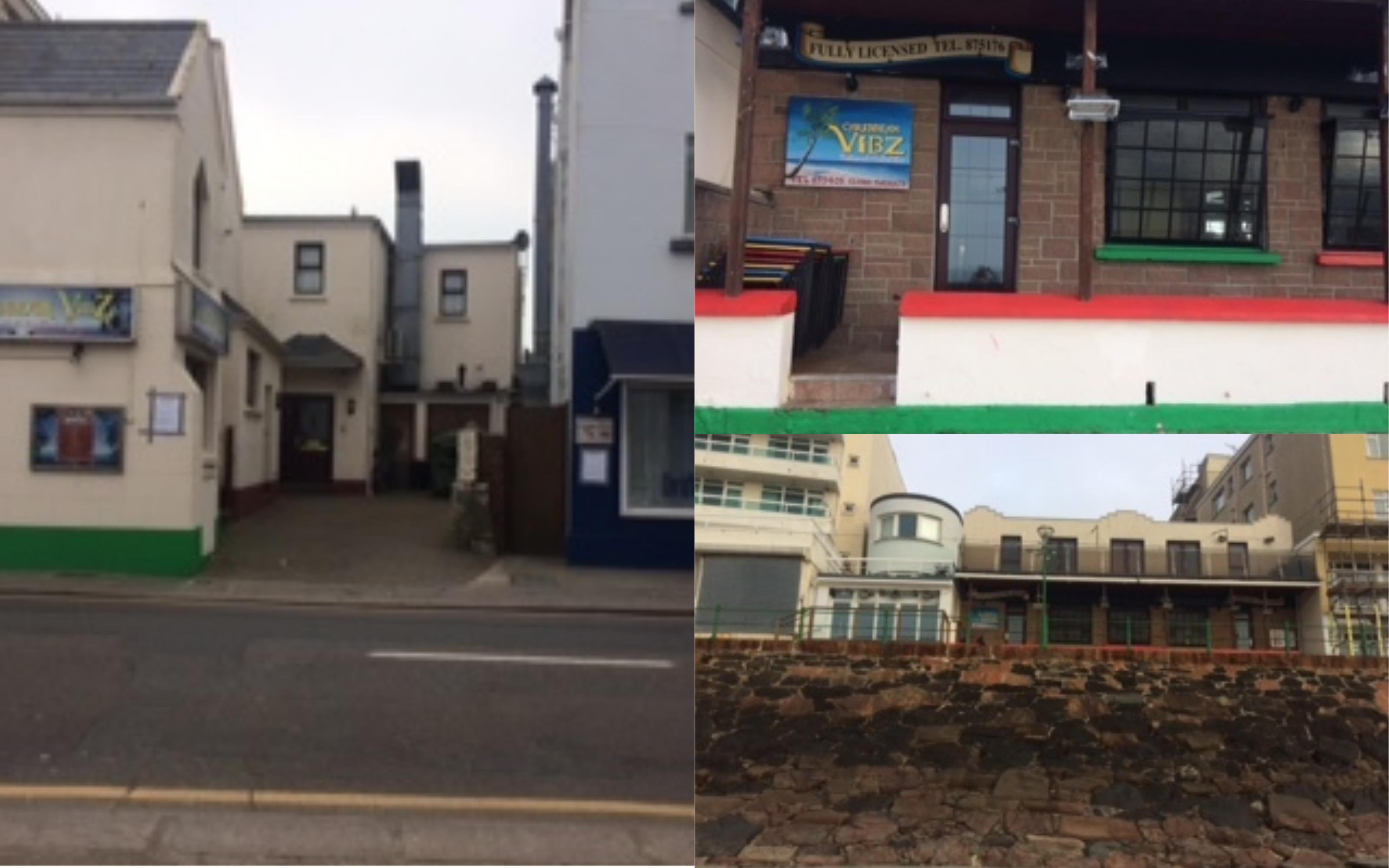 Pictured: Caribbean Vibz, the Drifters Beach Bar and Café, as well as Maison Chaussey Guest House, will be demolished.

Despite 23 letters of objection having been sent to the Planning Department – citing concerns such as loss of sunlight, overlooking problems, parking issues and the negative impact on neighbouring properties - the officer in charge of the case recommended its approval.

Giancarlo and Marc Mattioli, whose family has owned the Marina Metro Hotel for 50 years, spoke against the application at yesterday's Planning Committee meeting.

The father explained that the hotel would be subject to significant disruption and would effectively be turned into a building site, which would force the family to close it for at least three or four years, while the son said he was concerned the developers hadn’t done enough to actually stop the building overshadowing the hotel.

John Nicholson, an Associate Director at MS Planning and former government Planning Officer, said the proposals were contrary to planning policies but added he was “more worried” about what what he described as fundamental flaws within the recommendation made by the planning officer.

He described the site as being over-developed, claiming that the new build would impact too much on its neighbours. 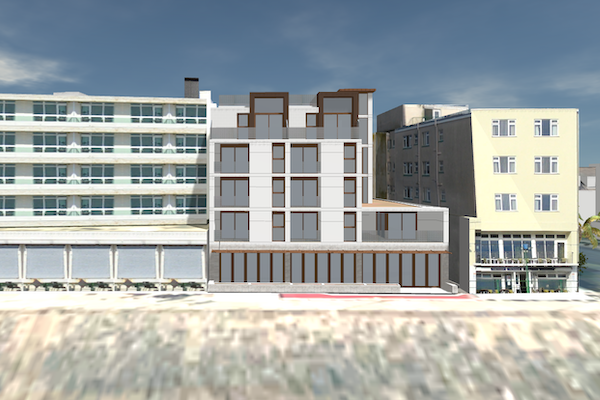 Pictured: The owners of the Marina Hotel said they were concerned over the impact the building would have on their property.

Mr Nicholson said that while the officer’s report said they met standards, 12 of the units did not, as they were “undersized”.

However, a planning official rebutted this, saying the guidelines in question were “very old” and said he had only counted six flats that did not meet the criteria - some of which only by a small percentage.

Ian McDonald, Director at Axis Mason Ltd, the agent for the application, assured the Committee that the new plans addressed the previous rejections and urged the committee to approve them.

Committee member Deputy Lindsay Ash said it was always difficult to make a decision when “someone’s business is being infringed upon”, but noted the island’s “desperate need for properties”. While he said the initial plans were “too much”, he said the new proposals were “just on the right side” and approved the officer’s recommendations.

Deputy Rowland Huelin also supported the plans, however saying he was concerned about the 'tunnel effect' on Havre des Pas. “This is a very fine line here,” he noted.

Despite referring to the effect the building would have on properties at the north of the site and the “inject of wind” the block would cause in Havre des pas, Deputy Kirsten Morel also approved the plans, commenting that the island “desperately needs homes”.

Philip Le Sueur, the Chair of the committee, also opted to go along with the recommendations of the planning officer.