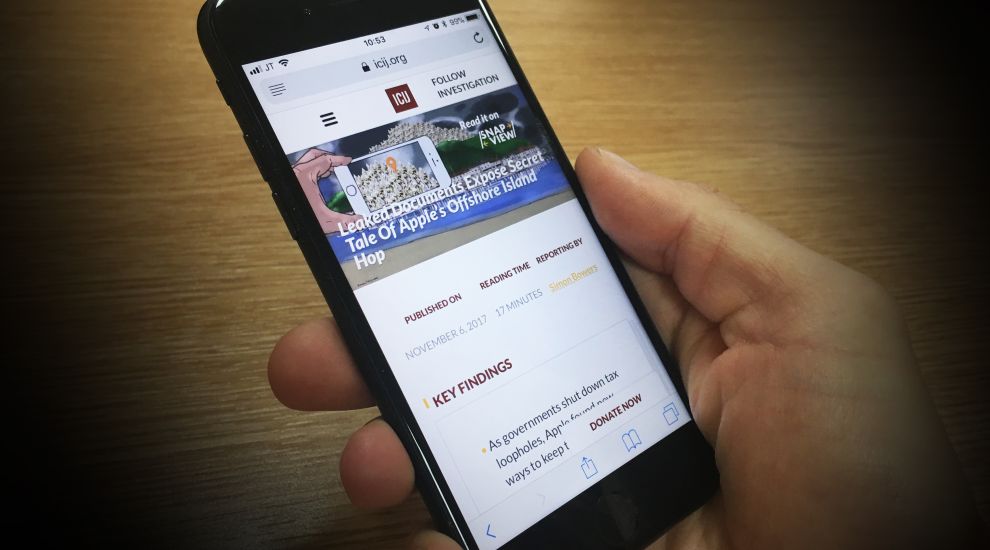 Jersey has today been dealt a blow in its bid to be considered a transparent and well-regulated jurisdiction following allegations in the Paradise Papers that Apple settled on the island after shopping around for a new low-tax home to stash their profits.

Apple deny any wrongdoing and say making their subsidiary which holds overseas cash 'resident' in Jersey in 2015 was "specifically to ensure that tax obligations and payments to the US were not reduced."

But the allegations in global media have seen Jersey, which has worked hard to shake the stereotype of being a 'shady' paradise for concealing money, tarred once again with the “tax haven” brush.

The island appeared on the front pages of numerous national newspapers this morning, and was also reported in the New York Times.

The Telegraph, which is owned by the Brecqhou-based Barclay Brothers, chose not to run with the story on their front page.

The news comes as part of the Paradise Papers data leak – the world’s second largest leak at 1.4TB of information, which was obtained from a hack at the offshore law firm Appleby, which has a major presence in the Channel Islands.

The Papers are made up of a major data hack of 13.4million documents, containing the names of around 120,000 people and companies, and are being gradually released to the public by the International Consortium of Investigative Journalists (ICIJ), who are working with a number of international partner organisations including the Süddeutsche Zeitung, The New York Times, The Guardian, Australia’s ABC, Le Monde in France and CBC in Canada.

A release last night - discussed in a segment of the BBC’s Panorama – showed how Apple had a ‘shopping list’ of priorities when it came to finding a new jurisdiction after Ireland changed their corporate tax laws in 2014.

“Don’t worry, there’s no democracy here”. Watch our investigation into Apple’s search for a tax deal with the Isle of Man. #paradisepapers pic.twitter.com/lYsKkgxAOF

Their ‘Principal Place of Business Questionnnaire’ asked among other things: “What information is publicly visible (e.g. through the companies registry or equivalent) when a company is registered in your jurisdiction?” and “Is there a credible opposition party or movement that may replace the current jurisdiction?” 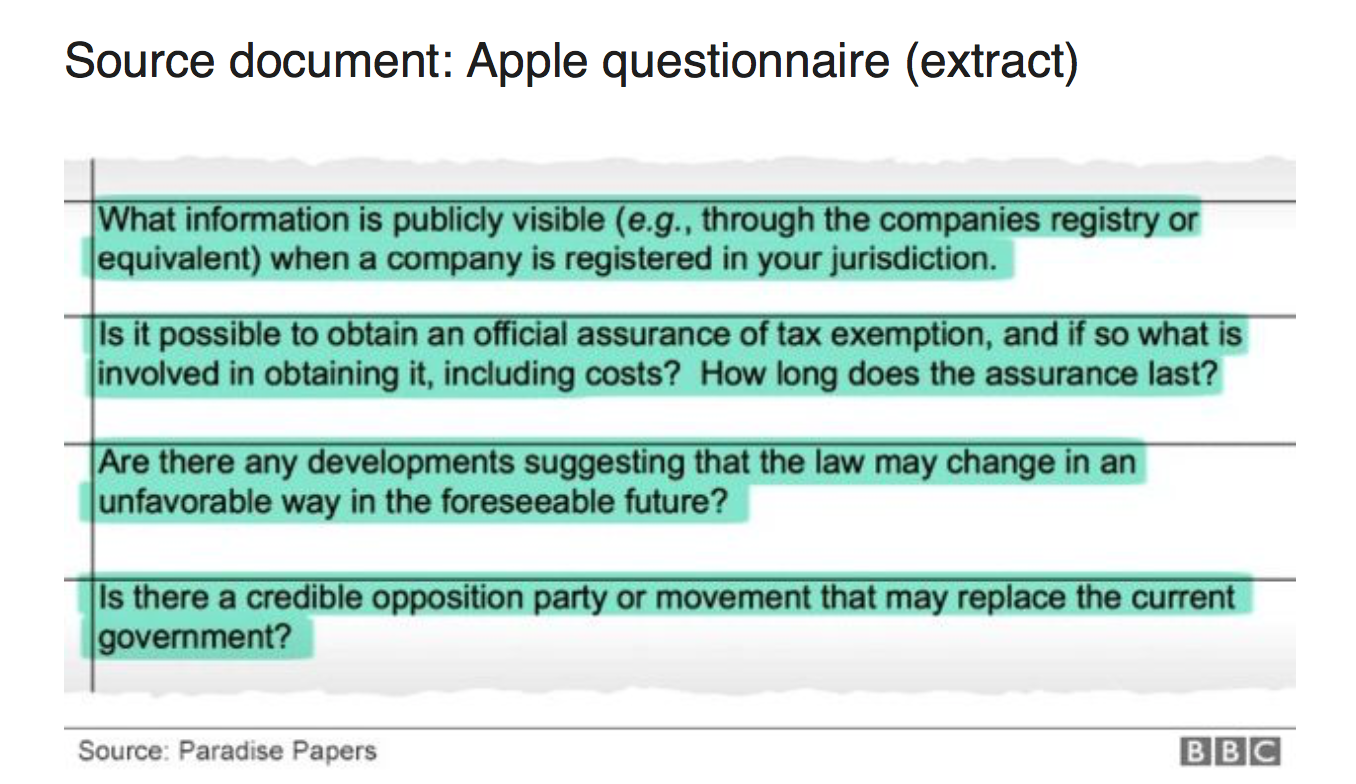 It is unclear exactly how Jersey representatives answered this, but the island apparently satisfied these tests.

However, the JFSC has since published a statement saying that neither of those subsidiaries was a Jersey-registered company, and that, "...Apple funds relating to these entities have not been remitted to or held in the Island."

And Apple has published a statement on its own website saying that its, "...subsidiary which holds overseas cash became resident in the UK Crown dependency of Jersey, specifically to ensure that tax obligations and payments to the US were not reduced. Since then Apple has paid billions of dollars in US tax on the investment income of this subsidiary. There was no tax benefit for Apple from this change and, importantly, this did not reduce Apple’s tax payments or tax liability in any country."

Other revelations in the Paradise Papers also contained Jersey links. They show that the Queen of Jordan Noor al-Hussein, who was occasionally referred to as “Mrs Brown” in Appleby’s database, is the beneficiary of two Jersey-registered trusts. The Valentine 1997 Trust was valued at more than $40million in 2015. It includes a property in South England, which was being considered for its potential use in a scheme to reduce Queen Noor’s inheritance tax liability. Her second trust, the Brown Discretionary Settlement, owns a Jersey-incorporated investment holding company worth around $18.7million in 2015. A spokesperson for Queen Noor commented that they were administered “to the highest ethical, legal and regulatory standards.”

A report in the Irish Times connected the island to a possible inheritance tax evasion ploy with the Bank of Ireland.

The news could have a knock-on effect for the island as EU finance ministers sit down today to discuss a potential ‘EU blacklist’. The proposals were due to be brought forward and agreed on by the end of the year, but talks have been sent to the top of the agenda following this week’s revelations.

A spokesperson for the States of Jersey issued a statement this morning hinting that legislation changes would be considered in order to stop the island becoming home to “abusive tax avoidance schemes” in future.

“Jersey Finance is aware of the allegations made in last night’s Panorama in relation to Apple’s connections to Jersey and has noted Apple’s own statement about its tax affairs. At the current time, we are only privy to information available in the public domain. However, we would reiterate that Jersey remains committed to ensuring that businesses and investors meet their tax liabilities and that it takes its approach to substance very seriously. Jersey Finance does not condone abusive tax avoidance schemes, and we would fully expect that should the government or regulator find any evidence of this sort of activity, action will be taken.”

Posted by Davey West on Nov 8th, 2017
Geoff Cook is in charge of Jersey's banking and financial services shop window. His job is to attract customers.

John Harris, director-general of the Jersey Financial Services Commission, which regulates the finance industry, said that while they were ‘monitoring’ developments, they were only regulating Appleby on a limited basis.

As a legal services firm Appleby is not regulated by the JFSC for the general conduct of its business.’

Mr John Harris, has been the Jersey regulator since 6th November 2006 and would have seen the mess caused by light touch banking and investment regulation which heavily contributed to the 2008 banking crash.

Why the light touch now, how is it going for your department and Jersey ?
To place a comment please login Login »