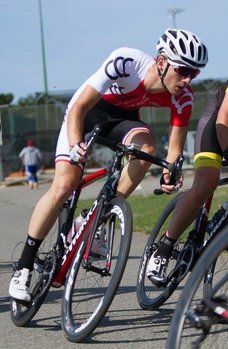 The race was held over four 25km laps of the testing Crotcher course, taking in the gruelling climbs of L’Etacq, La Pulente and Petit Port, along with a strong headwind on the southern leg of the Five Mile Road.

The race was animated by attacks throughout from the CASP cycling club, with Nick Le Cocq setting up an early solo breakaway on the second lap. Spence and Pilley broke clear on the third climb of La Pulente before being brought back by the chasing bunch at the end of the Five Mile Road.

The win was contested on the final climb of L’Etacq with Rebours forging clear at the crest of the hill to take a well-deserved victory, continuing his rich vein of recent form. Youth Academy Junior Rhys Pilley claimed an impressive second place ahead of former Commonwealth Games and veteran rider Chris Spence.