Jersey vlogger aims to be 'healthiest human being in the world' 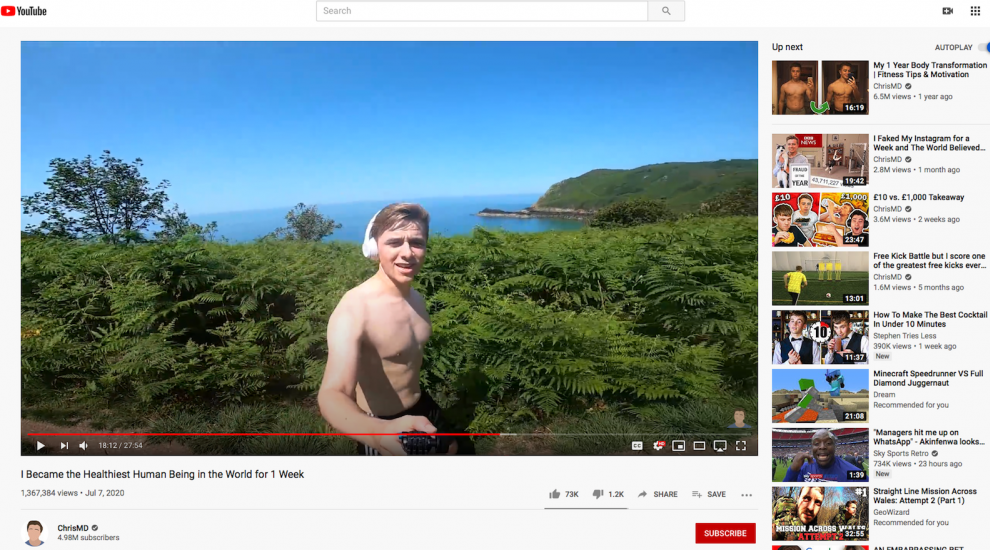 Jersey vlogger aims to be 'healthiest human being in the world'

A Jersey vlogger has challenged himself to live as ‘the healthiest human being in the world’ for one week, as a way to see what benefits the change in lifestyle can have on mental health and wellbeing.

YouTuber Chris Dixon - better known to many by his channel name, ChrisMD - overhauled his life for a week over June by maintaining a rigid diet plan, incorporating mindfulness into his daily routine, and upholding a strict regime of exercise.

Though the YouTuber is no stranger to altering his body, having completely transformed himself in 2018, this challenge was different.

In the video, Chris explained that instead of his body image, he wanted to focus on perfecting his “diet, exercise, mental health and sleep”, though added he wouldn’t be living “a life of 3% body fat, chicken, rice and crying yourself to sleep at night.”

Video: Chris documented his week of being the 'healthiest human being'.

Taking his advice from sources like the NHS’ ‘Eatwell Guide’, the US Government’s MyPlate tool and Graham Lawton’s book, ‘This Book Could Save Your Life: The Science of Living Longer Better’, Chris adopted a ‘Mediterranean diet’, which he says in the video involves “less red meat and more fruit and veg.”

Though Chris maintained the diet for the week, he found Father’s Day in particular a struggle - he had made his Dad pancakes, but then had to go through “the really depressing” experience of sitting and watching his family enjoying pancakes he couldn’t have.

Reflecting on the experience, Chris saw a mix of both positives and downsides, saying that “the time I have probably prolonged my life by, would have been spent working out measurements of food I was eating, which I don’t think is a great way to spend your life. But I have enjoyed this week, my mood was very high throughout it.”

Video: Chris had previously transformed his body over the course of 2018.

Looking at what he has taken from the experience, Chris ended the video, joking: “...Moving forward in the future, I’m going to have way more wholegrain, less sugar, less salt, alcohol – less fun really, I’m going to have less fun in my boring, prolonged life.”

Chris previously made headlines last month with his ‘cat goalie’ spoof, where he doctored a video of his cat saving goals as part of a challenge to post fake videos and see if anyone noticed.

The video went viral, and became such a sensation it was even included on The James Corden Show.

Video: Chris faked a video of his cat saving goals in May to show how easy it is to manipulate social media images and videos.

Indeed, you can see Smudge, the “fraudulent” cat in question, in the latest healthy eating video sat in a box labelled ‘Huge Frauds Only’.