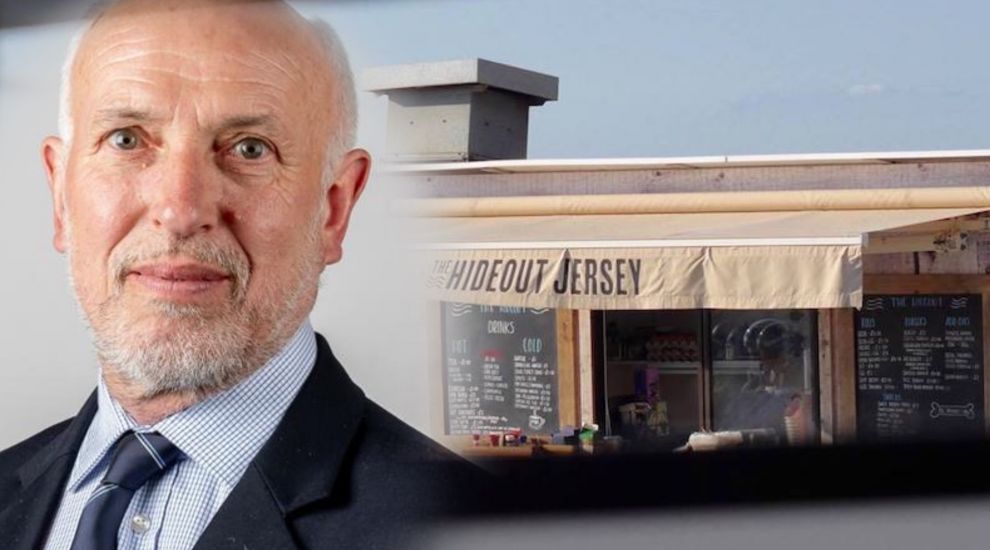 A legal battle between the owner of a food kiosk at La Pulente and St. Brelade has cost the parish more than £60,000 in legal fees.

The fate of the Hideout café on the slipway was settled in the Royal Court in July after a legal fight over whether it should make way for a Nude Food currently being built on the site of a nearby former toilet block.

The parish wanted the kiosk to go, while its owner wanted to stay, at least until the new eatery opened.

The two sides reached an out-of-court settlement allowing the Hideout to stay halfway down the slipway road until the new café opens its doors to the public.

That café is under construction.

It adds that a parish permit to serve food and drinks on a Sunday is £15 a year, so brought in £105 to the parish for the seven years [2015-21] that the Hideout has been operating.

The FoI say that 'rent' is paid in the form a ‘Chose Publique’ permit, which allows a business to operate exclusively on publicly accessible land. It says that the fees for the permits were introduced in 2020 and amount to £5,360 per annum. These fees have not been settled as yet,' it adds.

The FOI request is the second submitted asking for an update on parish costs. In May, St. Brelade had already spent £27,000 to fight the action before the out-of-court settlement.

The legal battle was partly responsible for pushing up parish rates by 14% this year.

Today, Mr Sutton said: "The only reason we were forced to pursue the legal route is because Constable Jackson reneged on an original agreement in place, which led me to call a parish assembly through a requête.

"I received a letter from the parish confirming the outcome of that decision but it then appeared to do a 180-degree when no one was looking.

"The costs that the parish have paid are due to the fact they conceded less than 24 hrs before the court hearing. If the parish were in the strongest position, then they would have won and I would have had to pay all their costs myself, from my own pocket."

Mr Sutton added that he had paid all his parish dues, apart from the 2020 Chose Publique, for which he had not yet received an invoice for.

The FOI request also asked how much another of Mr Sutton’s businesses, Off The Rails café and pizzeria by the Elephant Park, brought in to the parish.

However, the reply said that the landlord is Jersey Property Holdings; therefore, the parish receives no rental income.

As Express reported last month, the parish and Mr Sutton are involved in separate dispute over Off The Rails.

Mr Sutton has applied for retrospective planning permission to extend the building but this is being opposed by the parish and a number of nearby residents.

Posted by Joel Livingston on Dec 20th, 2021
You couldn't make this stuff up.
So the Hideout Cafe has effectively cost the Parish a fortune instead of bringing it in money.
Perhaps the Parish officials who originally drew up the Lease can explain what has gone wrong?
Posted by Martin on Dec 20th, 2021
I expect MOST Connetable,s will NOW think twice before any new permits for kiosks are handed out?
Posted by Jean Lelliott on Dec 20th, 2021
Seriously? This cafe owner just seems to want to cause trouble. Quite apart from anything else it is virtually impossible to park to use the cafe anyway. I have given up three times now when trying to use it. The parish should have offered a space at the car park across the road on a 'take it or leave it' basis. How many take out food places do we need?
Posted by Roy Dean on Dec 21st, 2021
Wasted £60,000

And no one feels responsible