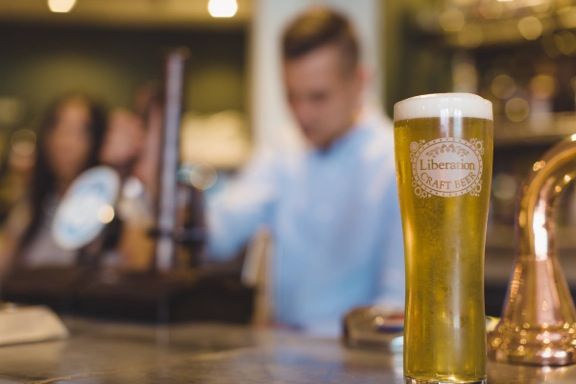 Liberation Brewery Chief Executive Mark Crowther says he was stunned by the 5% duty rise on alcohol in the proposed States’ budget.

Mr Crowther has warned the price hike will have a detrimental effect on his business, which employs approximately 300 people in Jersey, and owns 50 pubs. He has also strongly criticised the lack of any consultation with the industry ahead of the budget announcement. His comments are supported by the Chamber of Commerce, who say the Budget increases will hit the tourism and hospitality sectors hard, and justifying them on health grounds is just a smoke-screen.

Mr Crowther said: “The Liberation Brewery is a local brewery for local people and we pay millions of pounds in duties already, eight times more than they pay in Germany for instance.

“We are doing our bit to get the Jersey economy going, to help boost tourism and we provide jobs for hundreds of people, both in the Island and in the UK.

“For us to receive a price hike like this, around four times more than the rate of inflation, is simply outrageous. It is highly excessive and to be whacked by a tax of this magnitude makes absolutely no sense at all.

“Our business will undoubtedly be adversely affected by it. If you said to any business we are going to charge you an extra 5% across the board, you would find it is affected and we are no different.”

M Crowther is also furious that he had no foreknowledge that the States would be imposing the increase in alcohol duty.

“We had no notice at all. Not a single word. In previous recent budgets we have not been hugely affected, so why we have been now is just guesswork. We have obviously presented our case to the States in various meetings and told them how much we provide for the community, but in terms of being told we were about to be whacked with a five percent rise, nothing, not a thing. That cannot be right.”

Mr Crowther said: “We create a lot of value for the Island and this will hit us hard, no doubt about it. I’m outraged that they should do this and without even telling us beforehand.

“Those people who work hard during the week and like to go for a pint or two on a Friday night will really notice the difference. And through no fault of ours, the price of a pint, or a glass of wine, will go up markedly yet again.”

Jersey’s Chamber of Commerce echoed Mr Crowther’s comments, saying the price hikes have nothing to do with improving health in the Island, and everything to do with raising funds from drinkers and smokers.

The Chamber say they are “deeply concerned” by elements of the budget proposals and the suggested increase on alcohol imports (72p on a litre of spirits, 8p on a bottle of wine and 3p on a pint of beer) will have negative impacts on the islands fragile hospitality and tourism sectors.

President of the Jersey Chamber of Commerce, Kristina Le Feuvre, said: “For years the Treasury Department have justified their increase on alcohol imports, in order to tackle alcohol related issues in Jersey. However, consumption of spirits has continued to rise, so clearly, the government's tax and educational health strategy hasn't worked.

“Upping the import duty on alcohol is an easy tax tap for Treasury to turn to, but in doing so they’re squeezing the life out of a sector that’s weakened by the value of a falling pound and is only just feeling the financial benefits of support from Visit Jersey.”

The Jersey Chamber of Commerce say they would prefer to see government coming up with innovative revenue raising proposals.

Posted by nigel pearce on Oct 18th, 2016
The Chamber of Commerce say they would prefer to see government coming up with innovative revenue raising proposals. I would prefer government to cut back on wastage and unnecessary vanity projects.
To place a comment please login Login »