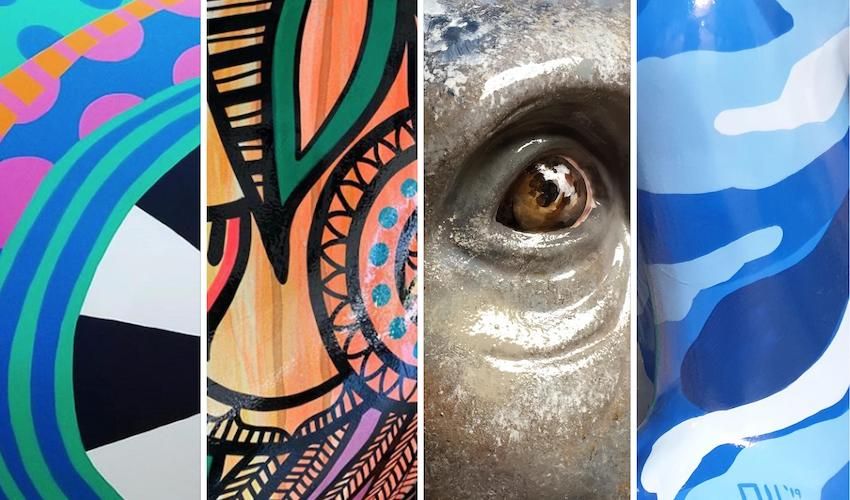 Granite, portraits, hedgehogs, flowers, and psychedelic patterns will all be on show when 40 life-size gorilla sculptures head into the wild in three weeks' time. Here's a sneak peek...

Launched by Durrell in partnership with Wild in Art, the 'Go Wild Gorillas' public art trail will help celebrate the charity’s 60th anniversary and raise funds for a new state-of-the-art gorilla house at Jersey Zoo.

With only three weeks to go before the gorillas get in the wild at different spots around the island, Express – which is supporting the initiative as its media partner – is giving you a sneak peek of the designs and presenting some of the artists behind them.

(Sponsored by Citibank and Liberation Group)

Local graphic designer and illustrator, Gabriella Street painted two gorillas for the trail, each with an unique style. “As soon as I saw the opportunity to be a part of such an amazing project, I started designing right away!” she said.

“Not only is this project a fun and unique way to unleash your creativity, you’re also helping raise money, awareness and support for, what I believe, is one of the most important charities Jersey has.”

Her first design 'I-Spy Gorilla’ (sponsored by Citi Bank) is “a painted collage of all the beautiful wildlife our little island has.”

“The diversity of our unique island wildlife has such a delicate balance and must be preserved and protected,” Gabriella said. “This was the motivation behind making this design an ‘I-Spy’ game. There is so much wildlife in Jersey, which is hidden all around us, you just have to look!

As a lover of all things 70s, Gabriella also came up with a ‘Groovy Gorilla’ design inspired by psychedelic posters and patterns, with bright, bold colours in a contemporary style of spots and stripes.

Gabriella admitted that it’s only halfway through her first gorilla that she realised how much work it would involve.

“I realised that there was more work than I initially thought! As I was in a shared studio space with other Go Wild Gorilla artists, we would share our tips and tricks, give advice and support each other’s designs, which led to a really positive atmosphere.

“I'm not going to lie, it was a lot of work, but it was so worth it, and I can't wait to see everybody's design out in the wild!”

(Sponsored by the Royal Yacht) 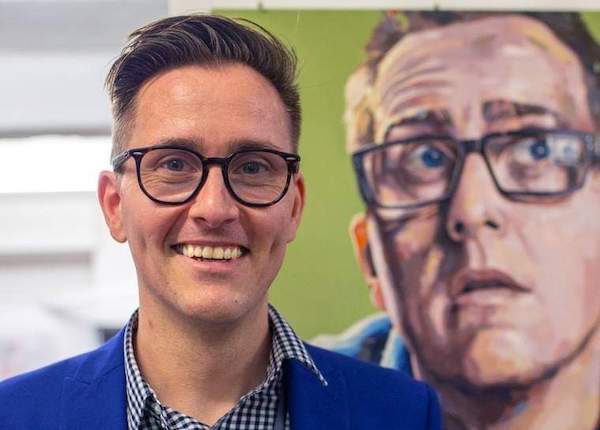 Pictured: Oliver Winconek's studio is located in a narrowboat.

Oliver Winconek, a portrait and figurative artist, mainly works with oils in his narrowboat studio, but can sometimes be found playing with watercolours, graphite and charcoal.

After many years enjoying the Wild in Art trails as a visitor, Oliver decided to submit a design and is currently on three different designs.  “Ashford Snowdogs was my first and proved to be such a fun experience that I couldn't wait to paint more sculptures,” he explained.

While some artists found the large surface of the gorilla somewhat difficult to navigate, Oliver said enjoyed its large surfaces which gave him more space for a portrait, and made good uses of the curves of the shoulder to give it a 3D element.

For inspiration, he looked no further than Gerald Durrell and the Durrell Wildlife Conservation Trust. “I have a huge fondness for animals and the work that the trust does is of paramount importance,” Oliver said.

“I wanted to echo Durrell’s message about the need to protect and conserve our wildlife and endangered species so the Dodo mirrors the trusts logo coupled with the portrait of Gerald Durrell and the use of camouflage.”

A fine artist specialised in oil paints, pencil and pen and ink, Amy Bourbon has been a regular visitor to the island - and Jersey Zoo - since a young age. 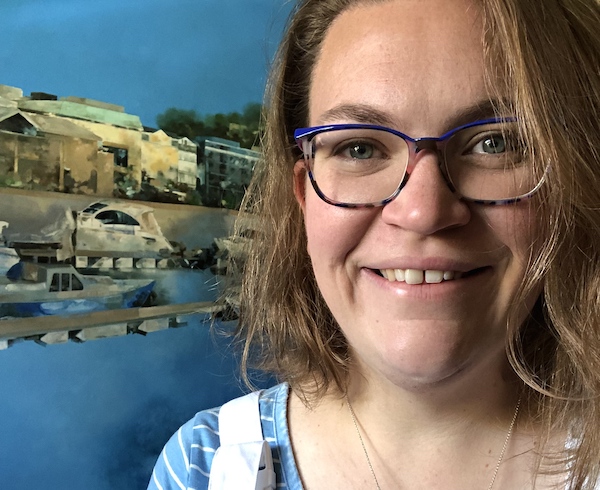 Pictured: "I have known the various past and present members of the gorilla family by name since I was very young," Amy Bourbon said.

“I have known the various past and present members of the gorilla family by name since I was very young, so I am thrilled to be supporting the fundraising for the gorilla enclosure at the zoo,” she explained, adding that she never imagined she could contribute to Durrell and their fantastic work through her art practice.

For her first time working on a sculpture trail – “but hopefully not my last” – Amy came up with a design inspired by her love of “the beautiful and unique Jersey granite” which textures and patterns she is very familiar having “sat on it, admired it, grazed myself on it and used it as inspiration for my art practice.” 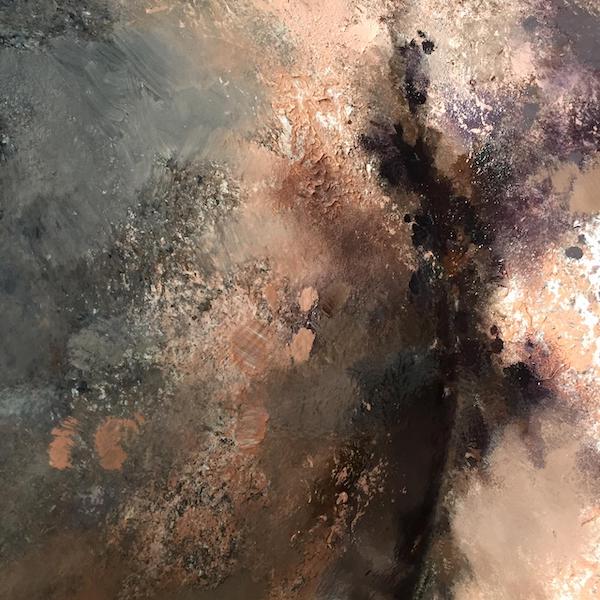 Pictured: Amy's design was inspired by by her love of “the beautiful and unique Jersey granite.”

While her initial design included orange, peach and brown tones, Amy later adapted it so it would match the rocks at the Ronez quarry, which sponsors her gorilla and have produced all the plinths for all 40 gorillas on the trail.

The design for ‘Rotchi’ – which means ‘rock’ in Jèrriais - was built up in layers using acrylic paints to develop a detailed surface. “The design is inextricably linked to the Jersey coastline but also references the strength of the gorillas and their resilient family unity,” Amy said.

Amy travelled to Jersey once again to paint her gorilla at Jane James Ceramics studio in St. Helier who hosted many of the artists for several weeks. “It was a privilege to see the gorillas transform into the incredible designs as well as watching my own gorilla come to life.”

While she says she adored every minute of her time spent with Rotchi, Amy admitted she became too attached to her sculpture. “I feel like I’m leaving a small piece of my heart in Jersey!”

(Sponsored by Cooper and Co)

Amrit Singh, who goes by artist name 'MrASingh', is an award-winning creative specialised in mixed-media intricate ink art who “loves working” on sculpture trails - so much so, that he has now taken part in 10, seven of which were this year!

This includes a Bear for Birmingham, a Giraffe for Worcester, a Wallaby for Isle of Man, an 'Oor Wullie' character for Scotland, an Elephant for Plymouth - and now a Gorilla for Jersey.

“Public art trails are amazing,” he said. “Not only do they bring so much colour to a city or island, but they are a great way for families and groups to get out and see more of their local area and visit new places.

“The fact that our sculptures will be auctioned off to raise money for Durrell Wildlife Conversation Trust is brilliant.”

Named ‘Creative Vibes’, his design incorporates patterns from areas where coffee originates from – a nod to the gorilla’s sponsor, Cooper and Co – in vibrant colours and textures.

“The secret to sculpture customisation is fluidity,” he added, explaining that some elements of a 2D design do not always work 100% when translated to a 3D form.

“I always look forward to seeing the sculpture in person because I always ask myself, ‘How can I make it better? How can I really take advantage of the curves, space and shapes and improve the design?’ This connects really well with my freestyle ink drawing too.”

Ahead of the release of the 40 life-size sculptures, 43 mini versions of the gorillas designed and decorated by Jersey’s children and community groups, will appear in shop windows and indoor locations all over the island. 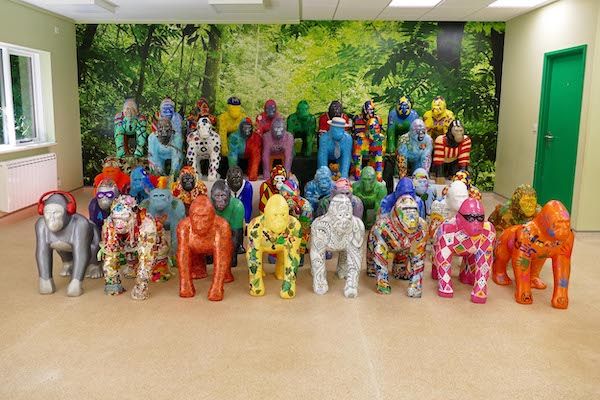 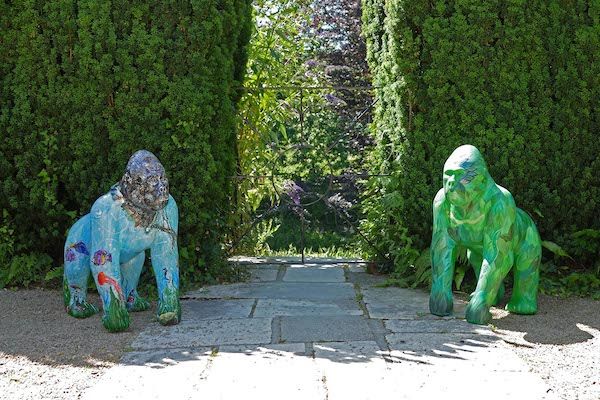 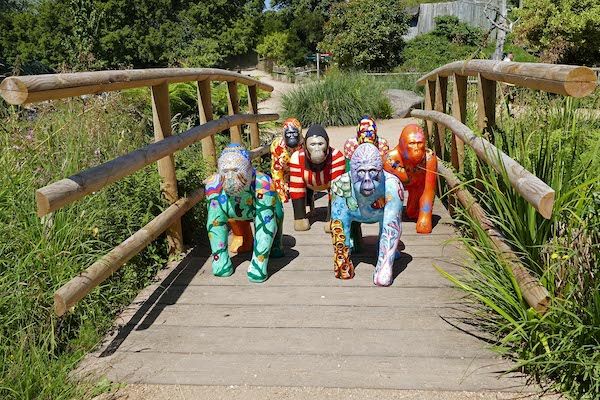 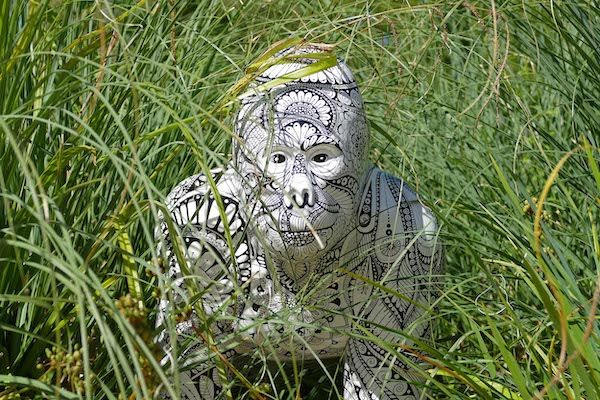 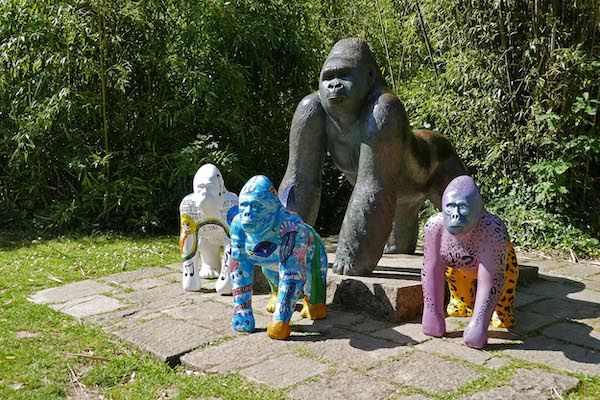