WATCH: A sneak peek at the wild gorillas... 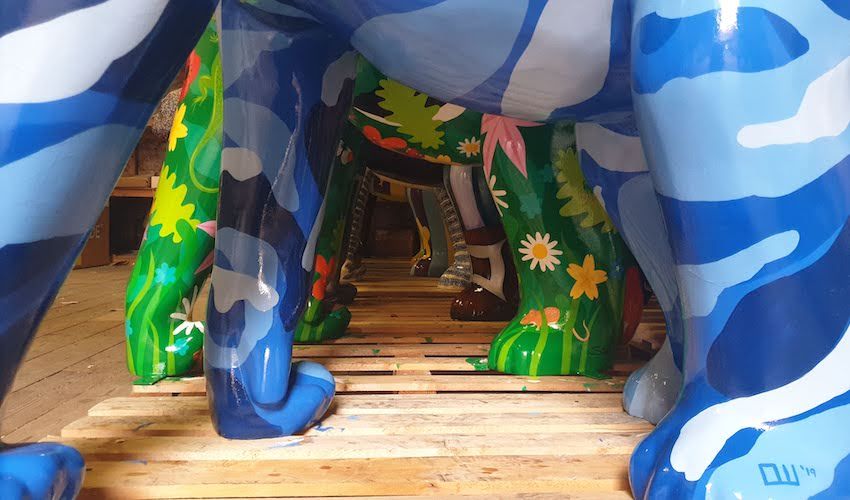 WATCH: A sneak peek at the wild gorillas...

From the detailed, to the dotty, bedazzled, and even penguin-themed... In just four weeks' time, 40 gorillas are set to invade the island. Express takes a sneak peek at the first of the wild designs...

Launched by Durrell in partnerships with Wild in Art, the 'Go Wild Gorillas' public art trail will help celebrate the charity’s 60th anniversary and raise funds for a new state-of-the-art gorilla house at Jersey Zoo.

With only four weeks to go before the gorillas get in the wild at different spots around the island, Express – who is supporting the initiative as its media partner – is giving you a sneak peek of the designs and presenting some of the artists behind them.

This is the first weekly instalment...

The trail was coordinated by local illustrator Will Bertram, who oversaw the whole process, from the submission to the actual making of the gorillas.

He says it would have been “ridiculous” not to be part of the project, which he describes as a celebration of 60 years of Durrell and “a big thank you to the public” for their support to Durrell.

Video: Will talks about his role as artist co-ordinator and the different styles in the trail.

“They are taking it out of Durrell, making it something than can be island-wide and enjoyed by anyone, without having to go to the zoo. The zoo is obviously an amazing place, but it is always so nice if you can relink it to the island.

“Durrell’s big message this year is 'rewilding our world', so it’s encouraging people to get out and do more walking, visit the trail, go outside, discover the island perhaps they may not know about and really enjoy the summer with all the lovely artwork around the island.”

Will himself has created his own gorilla, which, like his other work, is “message-driven.”

“I wanted the kind of message that is obvious to those who straight away respond to it but makes people think a little bit about why I have chosen to make my design encased in resin and to have it coming out of this ice block,” he explained. “The overall goal was just to make the closest thing to one of my digital illustrations as I possibly could, and I think I kind of have near enough got there.”

Having seen all the different designs, Will says there’s “something for absolutely everybody”, with a mixture of contemporary designs, playful characters, abstract patterns, as well as some designs inspired by nature or conservation messages.

Abi Overland - Gorilla in the Mist 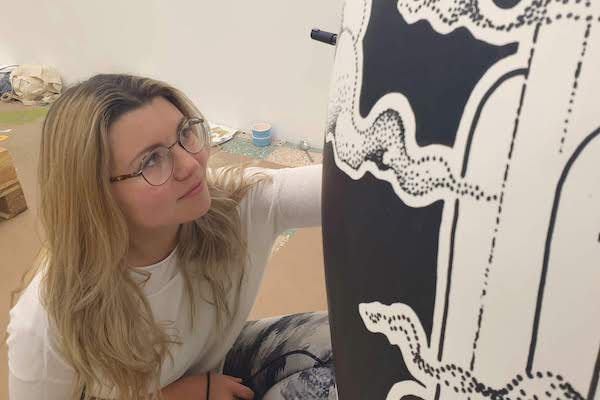 Pictured: Abi at work on her gorilla at Jane James Studio.

Local illustrator Abi Overland’s design is an homage to Dian Fossey's ‘Gorillas in the Mist’.

“It’s a celebration of their natural habitat, which works well into my style of drawing, so I came up with this atmospheric illustration to (hopefully) transport you there,” she explained.

As “a big lover of all things Durrell”, Abi said she couldn't not get involved in this “amazing opportunity to support them and do what I love at the same time, it's just a win all around for everyone really.”

This was Abi’s first experience with a sculpture, but she hopes it won’t be her last.

“All in all, I absolutely loved it. It's not a small beast so I have to admit it took me slightly longer than expected!” she confessed. “But also, I really wanted to put my all into it and make it the best it could be, so all the little details really took quite a long time. A nice little challenge for me.” 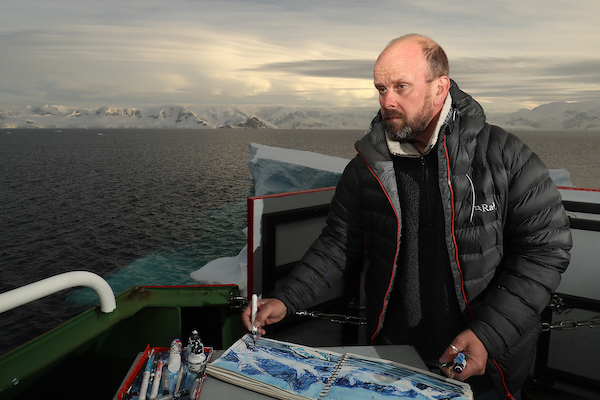 Local painter, sculptor and printmaker, Nick Romeril spent six weeks in the Antartic as the 2018 Artist in Resident for the Friends of the Scott Polar Research Institute. His experience inspired not one but two exhibitions, the first focusing on icy scenes and frozen landscapes, the second on the many humorous faces of penguins.

It is whilst working on his penguins that he heard of the art trail. He described it as “a great idea in so many aspects - firstly, to preserve this endangered gorilla and heighten awareness of climate change; to celebrate the fantastic work that Durrell does; and hopefully raise enough money to build a new home for the gorillas in Jersey."

"On top of those worthy causes, it is a great opportunity to do something new," he said. 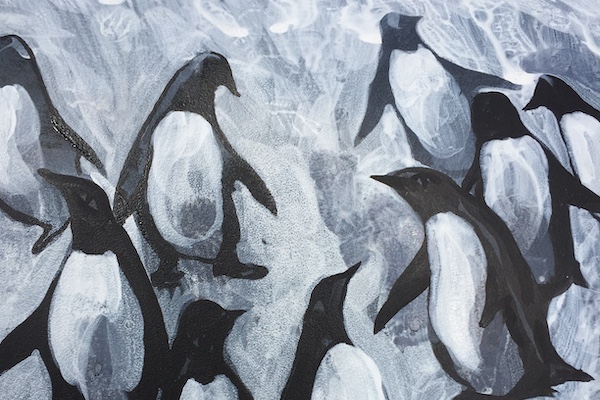 His design highlights the issue that both the gorillas’ home and the Antarctic, “two completely different environments” are facing.

“The climate is changing, and these animals are in danger. If these creatures ever meet, you will know that they are in crisis point.”

Painting a gorilla was a first for Nick and a real challenge as he confessed, one that took him three weeks rather than the two to three days he had planned. “There is such a large surface area and stretching underneath was tricky,” he said. 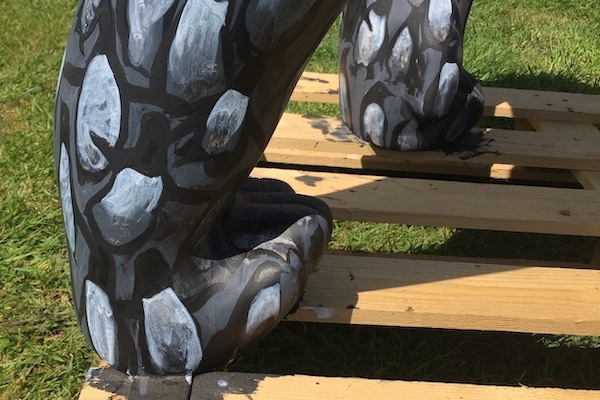 Pictured: With his design, Nick hopes to raise awareness of climate change issues.

“There are little stories all over the surface so hopefully my gorilla will engage the observer for a few moments of contemplation,” Nick explained.

“I hope that from a distance the viewer only sees a blackback gorilla, but as they study it further, they realise it’s covered in penguins. They then ask the question... why penguins on a gorilla?” 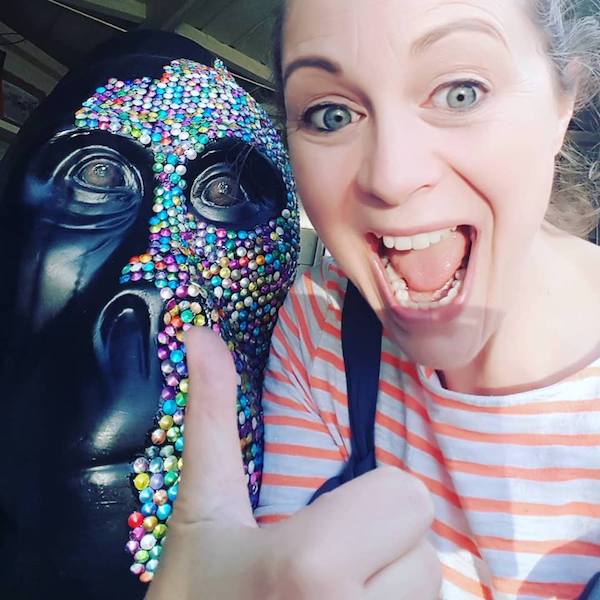 Pictured: Caroline with her gleaming work, which involved four months of jewel-gluing.

Zeus certainly stands out from the crowd of gorillas. He was decorated by jeweller Caroline Parrott, who spent four months painstakingly gluing 10 years-worth of off-cuts, using nearly 50 tubes of Epoxy Gorilla Glue.

Caroline is no stranger to sculpture trails – she took part in a Wild in Art trail in Bournemouth and completed a 3ft otter in Dartmoor in 2017 who inspired the design for Zeus – but the gorilla was her biggest project to date. 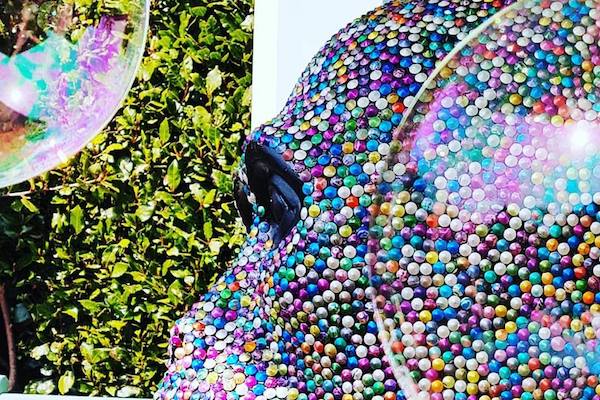 Pictured: Zeus was created with 10 years' worth of off cuts from Caroline's jewellery business.

“The idea was to create a textured vibrant and colourful surface in a material that I know and love, but am aware intrigues people as they don’t really know what it is until up close,” she explained.

“The surface catches the light and creates a fantastic spectacle but alongside that, it’s fantastic to touch and run your hands over and so great for those with visual impairments, or who benefit from using touch as a sense.” 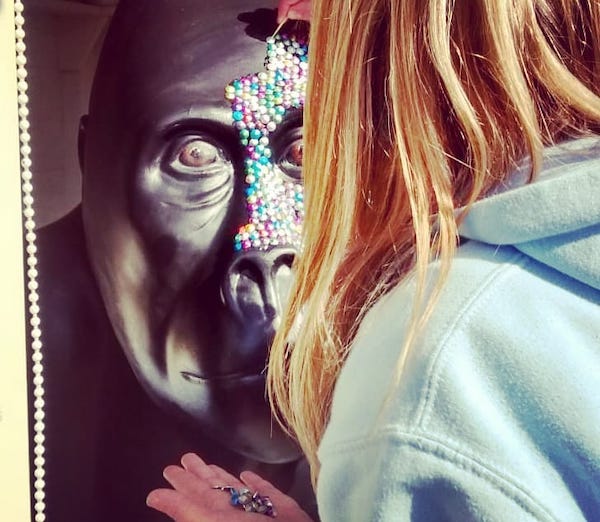 Pictured: Caroline received the help of her family, friends and boyfriend to finish Zeus on time.

While she wasn’t sure if she could finish it on time, Caroline says she refused to let the sculpture beat her.

With the help of friends, her parents who are both 73, her 11-year-old nephew Tom and her boyfriend, “the most patient and kind man on the planet” she managed to finish on time.

“I took no time off for two months and worked at it tirelessly, I watched half of Tom Hanks entire filmography on my laptop whilst punching out pieces one by one… And to be quite honest I wouldn’t necessarily say no if someone asked me to do it all again. It was lovely having a gorilla in our summer house and he’s very much missed.”