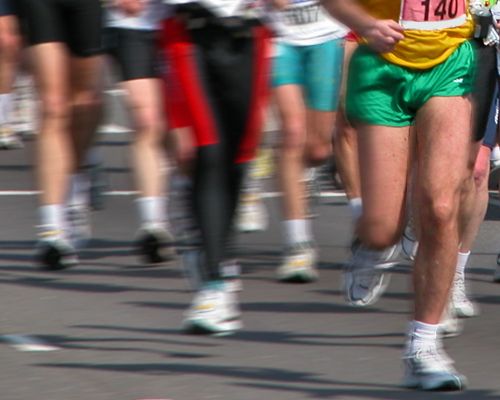 A team of Jersey runners are putting in a marathon effort in town today.

The group of five are preparing for next month’s Virgin Money London Marathon and putting in the miles on a treadmill outside BHS.

It will be no mean feat for Neil Ginnis who has stepped in at the last minute to join the Headway Jersey team after one runner had to pull out with a knee injury just last week.

The new recruit will be putting in some intensive training alongside his fellow teammates - Tracey Blackmore, Emma Louise Burns, Loraine Fulton and James Manners and they will all be hoping to boost their fundraising efforts. All the funds collected today will go towards the £2000 they have each pledged to raise for the charity.

Headway’s Fundraising and Events Co-ordinator Louise Stirling said: “Headway Jersey is very thankful to those who will be running and supporting this year’s Treadmill Challenge. The public are always really supportive and we hope that lots of people come down to cheer on the team and help them with their fundraising.  Huge thanks also go to BHS and Good Health for continuing to support the treadmill challenge.”

Throughout the day, the team will run 26.3miles – the distance each of them will run on the big day and as if running up and down Africa’s mountain in just under 24 hours wasn’t enough, Headway’s hero Harry McAlinden is back to help support the team and put in a few extra miles of his own.

You’ll find them all outside BHS from 10am until 3.45pm and you can find out more about the team’s other fundraising events and initiatives on the Headway Jersey Facebook page.

Virtual 10K to help out Headway