Minister wants his own department back 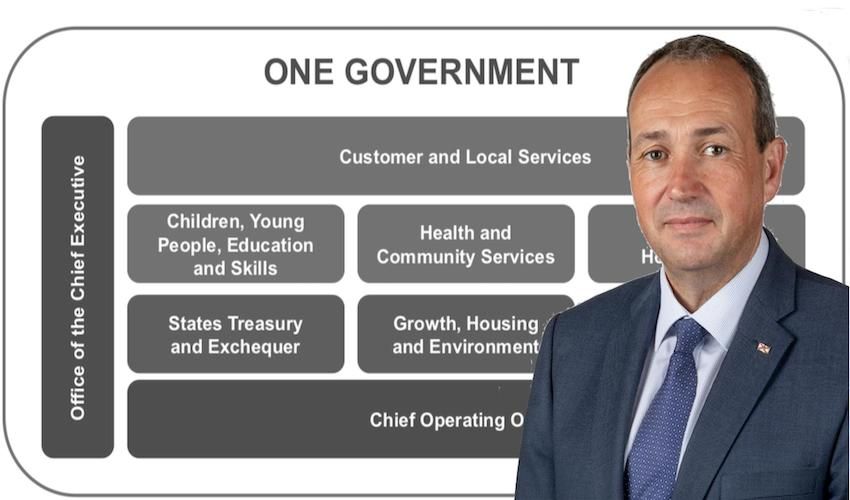 Minister wants his own department back

The Minister for Economic Development has challenged Chief Executive Charlie Parker's 'OneGov' restructure after his responsibilities and officers were absorbed by a much bigger "super-department."

Questions over the massive government overhaul were raised by Senator Lyndon Farnham during a grilling by a panel of politicians about the work his team is currently undertaking.

Under the Chief Executive’s new ‘OneGov’ model, Economic Development - formerly its own department for which Senator Farnham had political responsibility - was absorbed into a much bigger department called ‘Growth, Housing and Environment’ (GHE).

But during questioning last week by the Economic and International Affairs Scrutiny Panel, it emerged that Senator Farnham did not support the idea of having to share his department with three other Ministers.

Pictured: The change came about as a result of Charlie Parker's government overhaul 'OneGov'.

Describing GHE as a super-department, Panel Chair Deputy Kirsten Morel asked Senator Farnham: “How have you been interacting with the other Ministers who are involved with GHE?”

The Minister replied that, although the four politicians “work very closely together” due to their being “Council of Minister colleagues", he added that “there’s not a real affinity actually between the work we all do and the department.”

He continued: “Whilst it’s a holding position, I do not think that the economic function sits with environment and the… infrastructure functions.”

He said he expected that in the second “phase” of Mr Parker’s delivery of the new ‘OneGov’ structure, these functions will be separated.

Pictured: The Minister told the panel that he wanted to have his own department.

“I think those are discussions that are ongoing now because you’ve got some of the economic functions sitting across the Chief Minister’s department, Treasury and GHE. I think there’s an opportunity to tidy those up. There’s certainly, with the work on Future Economy, with the work on productivity and the… new industries that we’re developing – I would like to see all that focused in one department.

“So whilst it’s working now, I actually have more interaction with the Minister for External Relations and the Chief Minister’s Department and the Treasury Minister on economic issues. So, that’s I think [there’s] some work to do with that and free up the Environment and Infrastructure issues – they would sit more comfortably together.”

Accompanying Senator Farnham, Group Director for the Economy and Partnerships Daniel Houseago said that “there’s a challenge around thematic portfolios", explaining that one piece of work often warrants a more collaborative approach across departments.

Continuing in his line of questioning, Deputy Morel asked the Minister whether the change means he’s “essentially still in the silo” in comparison with Director General John Rogers who oversees the entire department.

Pictured: Growth Housing and Environment contains a third of the Council of Ministers.

Acknowledging the importance of “good understanding and working relationship[s]” between Ministers and their corresponding Director General, the Senator added: “Without trying to become too operationally involved, I don’t want to have to be persistent. I think Ministers and the government; States Members should make sure their priorities are understood and then those should be carried forward.

Deputy Morel observed that, while he had seen Mr Rogers accompany the Ministers for the Environment and Infrastructure to Scrutiny meetings, he had never seen him attend with Senator Farnham.

To this, the Economic Development Minister said that it was “probably” because Mr Houseago and Darren Scott – who were in attendance – are his and Assistant Minister Steve Pallett’s “key staff”, but added that he would “be very happy” for the Director General to attend alongside them.