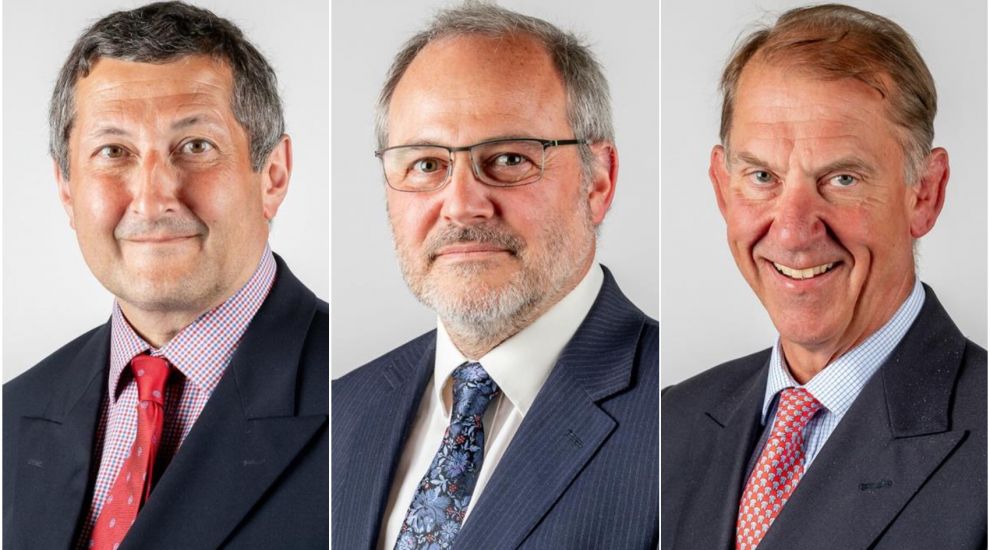 A new centre-right political party spearheaded by the Home Affairs Minister and two Assistant Ministers - and backed by the Chief Minister - has officially been registered in the Royal Court.

The party's 'Leader' - and hopeful 'Chief Minister' - won't be chosen until later in the year, when a party conference is held.

The Jersey Alliance bills itself as a "diverse and inclusive centre-right party that counts a number of familiar politicians among its members but is dedicated to bringing fresh new faces to the Assembly in 2022." 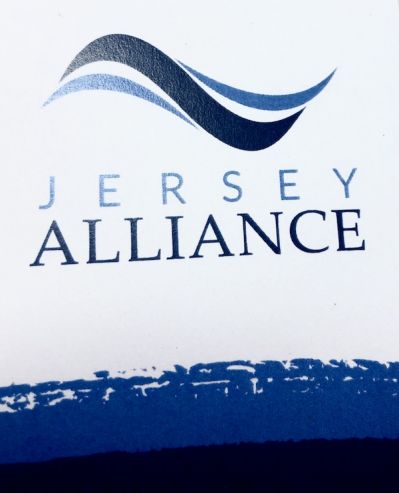 Pictured: A first glimpse of the Jersey Alliance logo.

International Development Minister Deputy Carolyn Labey is also understood to have been approached.

Deputy Ash declined to confirm names to Express, but said that the party had the support of around 10 sitting States Members, and had already identified around five new faces to stand as candidates in the next election.

He told Express that the trio initially thought about setting up a party around one year after being elected.

"We were very surprised at how left-leaning the Chamber was... We just felt the electorate probably needed to know what people stand for. If you're going to stand for 20% tax or 25% tax, people should know," he explained. 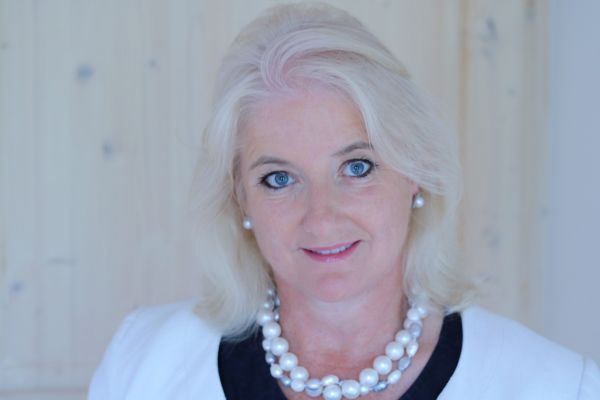 Deputy Ash said the rationale for creating a party was largely around a keenness for more action.

"The aim is to introduce considerably more accountability in politics... At the moment due to the nature of Troy rule, you're always going to have a minority government - whether you like them or not, the two governments that did the most in the UK were the [majority] Blair and Thatcher governments because they weren't having to compromise," he explained.

"The hospital is a good example. If 12 years ago there was a party with an overall majority, we'd have saved the island millions of pounds - people wouldn't have bowed to pressure groups."

Deputy Ash said the Government's work during the pandemic was a further example of how a singular mindset leads to better outcomes: "When you get populism, the decisions aren't always the finest. Covid swept all that away, and people had to act as one."

The Jersey Alliance won't be revealing some their core policies until a press conference at the Royal Yacht Hotel next Tuesday. However, Deputy Ash was clear that their main principle was that "no one will put their own political ambition before the good of the island."

Next Tuesday will also see the launch of the party's website -  www.jerseyalliance.je - and involve a call for potential election candidates.

News of the party’s launch has received a mixed reception among backbench States Members, with some reporting their “surprise” at some of its backers.

Former Privileges and Procedures Committee Chair Deputy Russell Labey, who is not a member, said he wished the party well. His previous role at PPC involved spearheading electoral reform changes to drive engagement.

"...They are a direct response to the electoral changes I pioneered. The parties are getting people to engage with politics a year in advance of the next election and that's great," he commented.

While he has previously worked as a "team" with his fellow St. Helier No 1 Deputies, Scott Wickenden and Judy Martin, he said that the trio would still be able to "campaign as the most effective team for the constituency", which will become 'St Helier South', even if they were not part of the same party.

On Twitter, Reform Jersey leader Senator Sam Mézec yesterday joked that the party's launch was “amazing news” before later adding: “*Ahem* Just a friendly reminder that there is only one centre-left political party in Jersey.”

*Ahem* Just a friendly reminder that there is only one centre-left political party in Jersey.https://t.co/UNDN1yPcg2

The Jersey Alliance will be Jersey’s third political party, after Reform Jersey, which was founded in 2012, and the Progress Party, which launched this year with Senator Steve Pallett and Deputy Steve Luce at its helm.

Last week also marked the official launch of the Jersey Liberal Conservatives, whose Chair is former Bailiff and External Relations Minister Sir Philip Bailhache. At the moment, the group describe themselves as a “movement”, but say they may form a party with a manifesto once they have gauged the level of support.

Despite being rooted in Jersey’s history, party politics has in recent decades been dismissed as inappropriate for the island’s political system by some critics. However, since the advent of Ministerial Government, tides have gradually turned, with more and more coming to the view that Government would be more efficient if all Ministers spoke with a single voice.

Currently, there is no ‘collective responsibility’, meaning Ministers are not bound to vote in the same way, whether they agree or not. This was dropped in 2018 when a new law giving the Chief Minister and Chief Executive more power was passed.

When forming his Government in 2018, newly-elected Chief Minister Senator John Le Fondré was clear that he wanted a range of views from across the political spectrum. 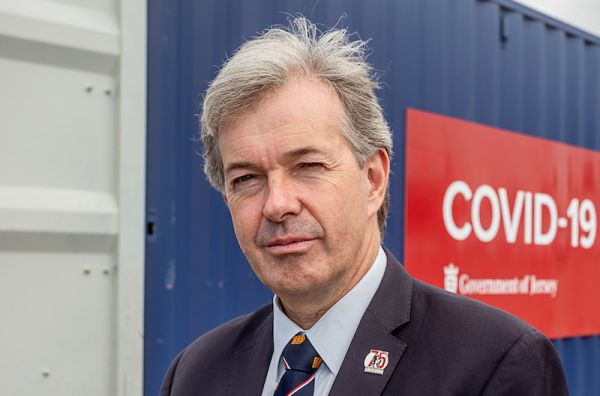 Pictured: Chief Minister Senator Le Fondré is a backer of the new party.

Senators Tracey Vallois and Sam Mézec, former Education Minister and Children and Housing Minister respectively, have both said their time in Government highlighted issues with a lack of political unity.

Following her resignation over concerns she wasn’t being listened to, Senator Vallois told Express in January: “Ministerial government can only work if you’ve got party politics… There is absolutely no doubt about it. To be fair, and to be respectful to [Senator Le Fondré], he has tried to bring a lot of people together who don’t necessarily politically see eye-to-eye… and that’s to a certain extent quite refreshing.

“But when you’re the one that’s arguing against the majority position and have to go out and defend and answer for it, you think to yourself sometimes, ‘I can’t do this.’ How can you with every fibre of your being say that you support this?”

Senator Mézec, meanwhile, described a “poisonous” culture in the civil service and recalled how he was “stonewalled” and “ignored” by civil servants as he tried to fulfil his election promise of dealing with social housing rents.

This, he said, would not be the case in a party system.

“Time after time people say: ‘We just need to get rid of these awful politicians and elect some better ones and that is what we need. That will make things better.’ How many times do we have these elections where those who have not lost faith yet go out and cast that verdict and they get exactly the same thing over and over again? The new boss turns out to the same as the old boss,” Senator Mézec explained.

“There can only be one solution to this: it is for candidates to group around their shared values and their policy priorities and get elected together with straight numbers and walk into those officers on Broad Street, hand over their election manifesto to the civil servants, to the CEO and say: ‘This is what the public have voted for. Now get on with it and deliver it.’”

As part of an ambition of to be the party of “getting things done”, the Progress Party, meanwhile, have opted to include a ‘Whip’ to ensure all members vote the same way. This role is currently held by Party Secretary Deputy Luce.

“Although at the start it will be relatively soft, you do need discipline within a party. There’ll always be crucial States votes where a party needs to take a defined line – that doesn’t mean people don’t have the right to express their opinion, but if you’ve got a party policy, your elected representatives need to follow that path,” Progress’s leader, Senator Pallett, told Express.

Jersey's next election - which will be the first without Senators and with a set of new constituencies - will be taking place in June 2022.

Posted by john garner on Jul 16th, 2021
Brave of Mary O'Keeffe to identify with the incumbent politicians with an election coming up and the public feeling atm as I read it ...Might this be used as a litmus test ?
Posted by Bob Wareing-Jones on Jul 19th, 2021
Political parties are long overdue and much needed in Jersey’s current fractured and ineffective form of government. Also needed is Separation of Powers. Will the winning party political parties leader automatically become the Chief Minister though as in the UK and ‘asked’ to form a government? Well under the current system the CM and indeed the CoM is formed post election and by a vote across the assembly. This will create an opportunity to challenge from within and seek to form more of a coalition! I hope each of these parties provide the electorate well in advance of the General election copies of their manifestos, and every candidate nails his or hers true colours to the mast of whichever party they are standing for or declaring themselves as an Independent if not. Will turnout in the next election be significantly higher next year than in previous years? Time will tell and I would be interested the hear the thoughts of Professor Curtis who is often invited to comment during Jersey’s elections. Let’s hope a sea change in our political system and indeed politics in general is underway. It is needed more than ever both as a result of the pandemic and the less often mentioned these days, Brexit result and its troubling after effects.
To place a comment please login Login »