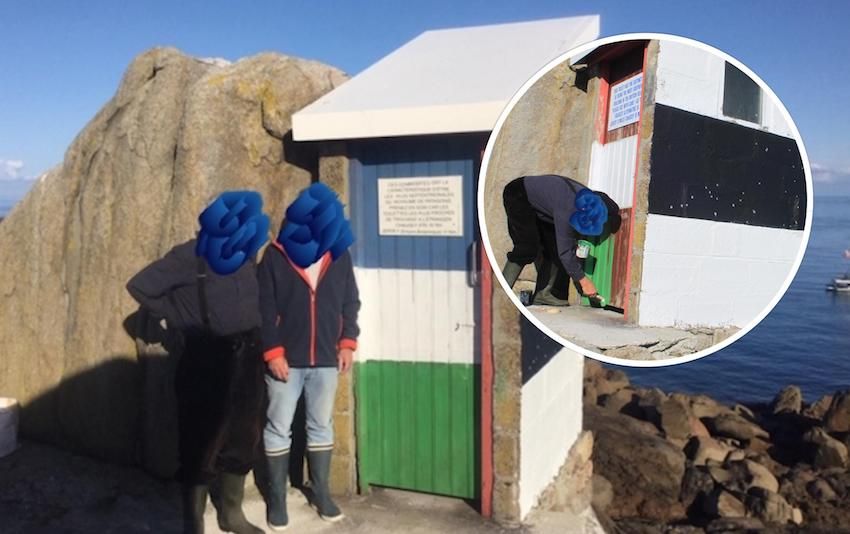 A group who ‘invaded’ the Minquiers in the name of a 150-year-old kingdom have spoken out for the first time since their attempted takeover, saying it was a retaliation against Brexit and revealing their intentions to transform the iconic toilet into a ‘museum’.

The so-called ‘Special Forces of the Kingdom of Patagonia’ reached out to Express after it broke news of their conquest on the rocky outcrop south of Jersey last week.

The second major intervention of its kind in 20 years, the ‘invasion’ saw the group storm the Maîtresse Île, hauling up the Patagonian Flag and repainting the toilets in the tricolore, before retreating upon the arrival of hut owners Julian Mallinson and Paul Ostroumoff.

Police were notified, as well as Her Majesty’s Receiver General, who is responsible for administering land owned by the Crown. He pledged to keep the Minquiers “under close review”. 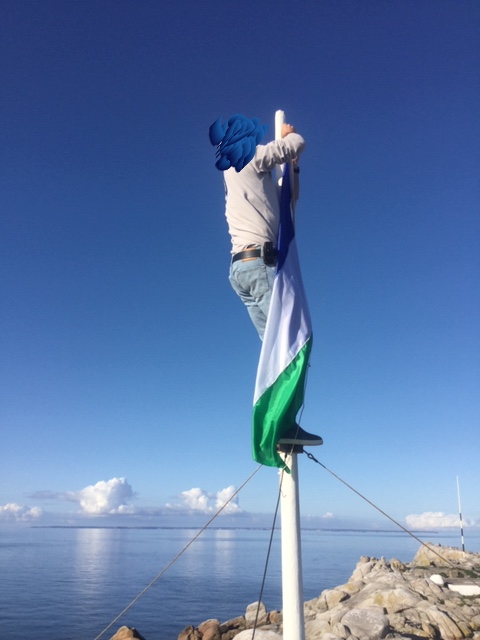 Pictured: One of the anonymous 'marines' hauled himself up the pole using his arms alone in order to put up the Patagonian flag.

The Minquiers, which are home to ten huts, have a long history of being targeted by the group.

Their ‘King’ is actually a man called Jean Raspail, a celebrated French author, traveller and, it seems, practical joker. He claims the title as he is reportedly the relative of the French adventurer who declared the short-lived ‘Kingdom of Patagonia’ in Argentina in the 19th century.

The first ever attempted coup by Patagonian forces came in the 1980s, and was said to be in response to Britain’s “unacceptable and prolonged occupation of the Malouines (Falkland Islands)”.

This one, however, was sparked by the UK’s imminent departure from the European Union, they revealed. 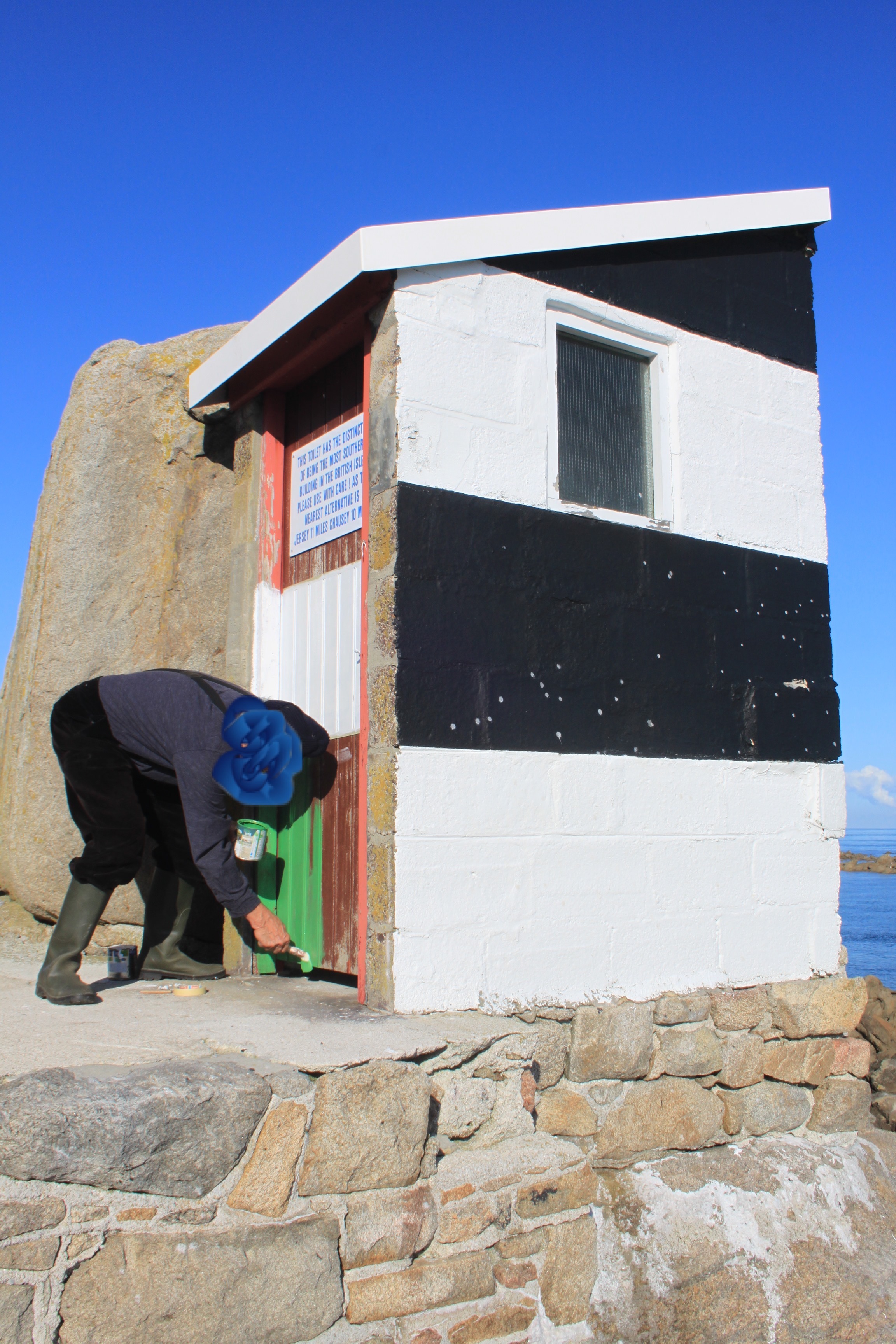 “In the context of Brexit, the government of His Majesty Orelie Antoine, King of Patagonia, tasked the General of Patagonia Jean Raspail with organising a military operation to reaffirm Patagonian sovereignty over the archipelago of the Minquiers, formerly British, along the Cotentin Peninsula,” the ‘Forces’ explained in a statement.

“On the 22 October, a commando group of five volunteer Patagonian marines disembarked on the Maîtresse Île of the Minquiers. The blue, white and green flag was raised and flew over the island… The island’s iconic toilet door was repainted in the Patagonian colours and a plaque was fixed there.

Speaking on condition of anonymity to Express, one of the five ‘marines’ explained how, upon noticing that the main flagpole was broken, such was his determination to hoist the Patagonian flag, that he hauled himself up the alternative pole using the strength of his arms alone. 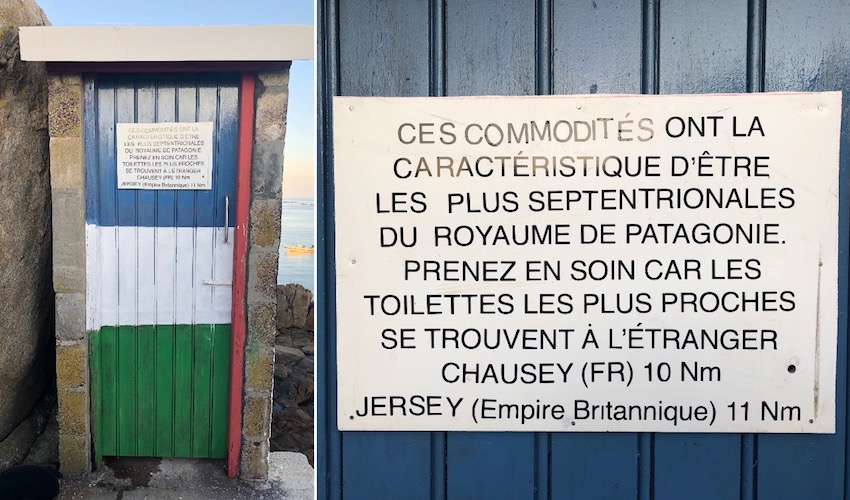 Pictured: The handiwork of the invading forces on the Minquiers' iconic toilet.

He further explained that the ‘Forces’ noticed on their arrival that the iconic Minquiers toilet, which bears a sign proclaiming it to be the most southerly building in Britain, was “badly damaged” and in need of repainting.

“Fortunately, the Special Forces of the Kingdom of Patagonia never travel without taking the colours of the Patagonian flag with them.”

Having completed the paint job, and replacing the toilet’s sign with a plaque describing the building as the most “northerly” in the Kingdom of Patagonia, the group said they saw Mr Mallinson and Mr Ostroumoff arriving and made a quick getaway to avoid a “diplomatic incident” – unfortunately meaning that a goodwill gesture opportunity was missed.

“It was at this moment that the Patagonian forces identified with the binoculars the boat of Mr. Ostroumoff who entered without authorization in Patagonian territory. To avoid a diplomatic incident, the special forces preferred to pick up their anchor, forgetting to leave a bottle of champagne in the toilet." 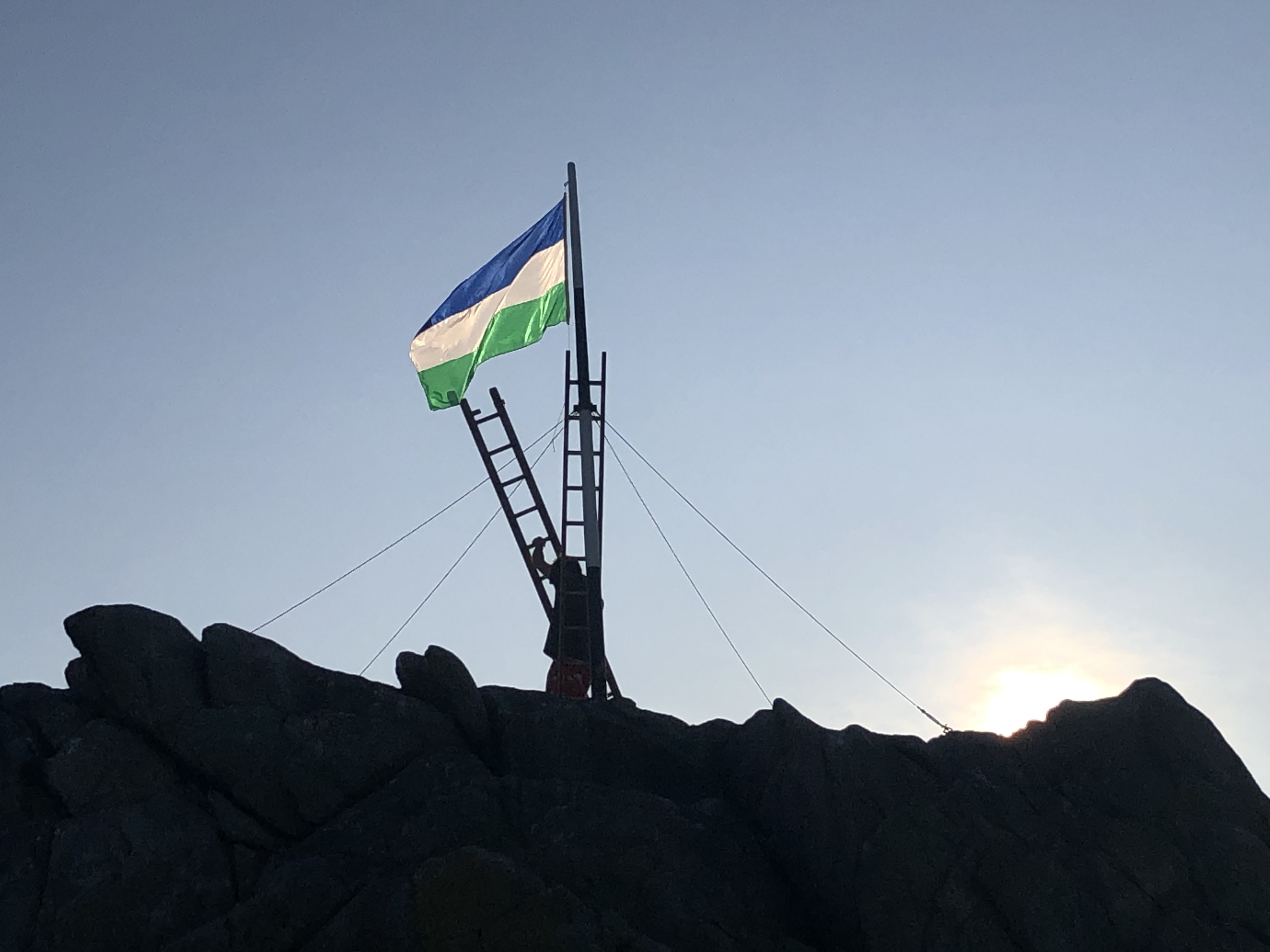 Pictured: Mr Ostroumoff attempting to take the flag down.

The ‘invader’ further expressed hopes that their panel would not be destroyed by the Minquiers hut owners.

“The subjects of His Majesty consider the Minquiers to be an integral part of their kingdom and they look after it. Thus, the panel on the toilet was not stolen - it was taken off with great care. The commandos of His Majesty hope that the Jersey people will handle the replacement panel with the same level of sensitivity.”

Mr Ostroumoff, who had to use a double extension ladder to remove the Patagonian flag, had joked that the it would now form part of the “museum” of his home, with the plaque’s future yet to be decided.

The member of the commando group had another idea: “The Special Forces of His Majesty Orelie Antoine, King of Patagonia, request that Mr Ostroumoff fix the panel to the inside of the toilets, which could thus become a Patagonian museum.” 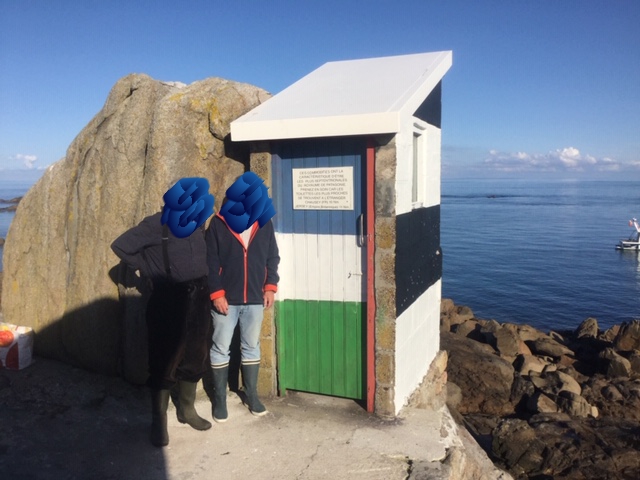 Pictured: Two members of the Special Forces standing alongside an attempt to stamp - or paint - their authority on the island.

Following the 1998 Minquiers ‘invasion’, the British Embassy ended up having to intervene to get Mr Raspail to return the captured Minquiers' flag.

He said he would only do this on return of the Patagonia flag, which had to be done on ‘neutral’ territory – a Parisian bar – in a move that attracted national attention.

While the Kingdom of Patagonia’s latest takeover attempt has once again attracted national interest, authorities now appear to have shifted their view with regards to responding, with the Government of Jersey noting it appeared to be a “practical joke” with “no harmful intent”.