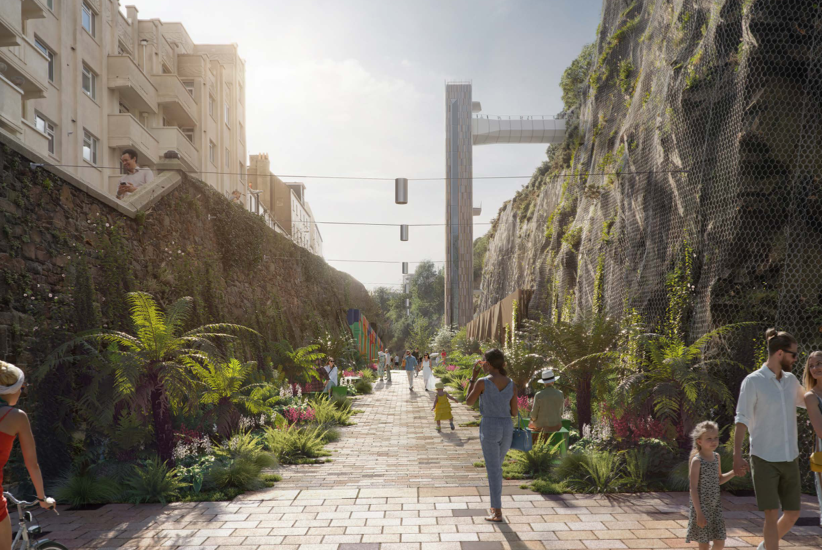 Plans to ‘elevate’ Snow Hill with new access to Fort Regent will also involve a significant remodelling of the area as a park, it has emerged – but a third of parking spaces could be lost as a result.

Last Tuesday, the States of Jersey Development Company unveiled plans to create a passenger lift and bridge next to the Stormwater Cavern’s entrance, create ‘bleacher’ style seating at the entrance to Snow Hill, improving the bus shelter and adding a leafy roof to the public toilets.

But a presentation given by the developers alongside MJP Architects and Gillespies to neighbouring residents on Friday revealed further plans to ‘green’ the area – by removing the lower end of the car park and replacing it with a park.

In total, they said there would be 678sqm of new planting, and that 125 places to sit would be created.

That would involve removing around a third of current parking spaces – 29 of the current 96, leaving 67. 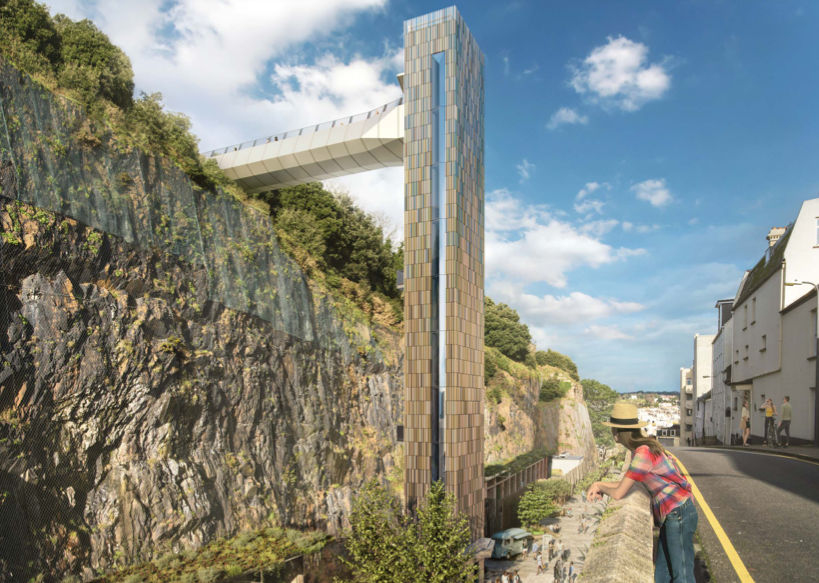 Pictured: The development of the lift and surrounding area will result in a significant reduction in car parking spaces.

It also proposed that 78 motorcycle parking spaces will be relocated to Green Street Car Park.

Under the plans, the area currently occupied by the motorcycle spaces, described as “feeling back of house and unwelcoming”, will be converted to pedestrian paving surrounded by groups of seats and planting. 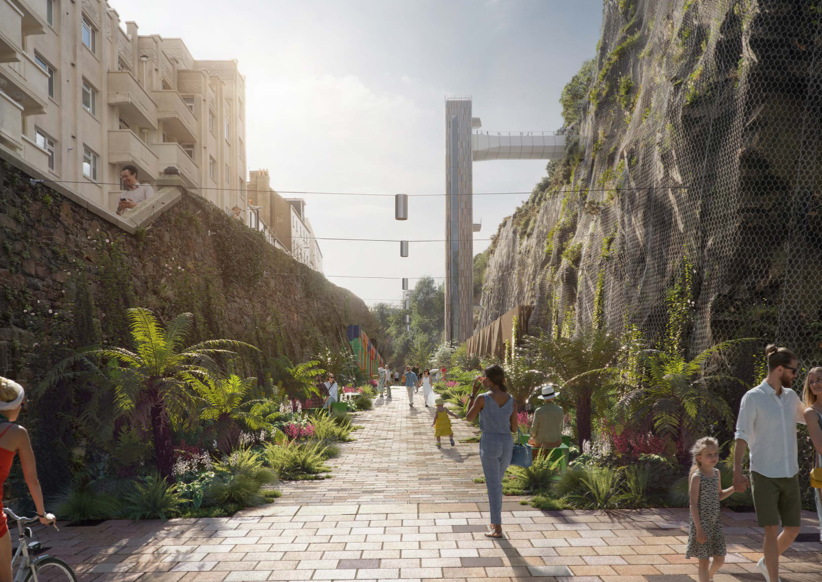 Pictured: A previously unseen mock-up of 'The Valley Floor' - an area currently occupied by motorcycle parking.

"Over 22% of the site area will include new planting, which improves urban heat island effect, introduces sustainable urban drainage solutions and enhances biodiversity as well as pedestrian experience," a copy of the presentation shared with Express read.

The pedestrianised area, described as 'The Valley Floor', will lead into the 'Railway Park Plaza' where the space widens into an area developers say islanders will be able to “pause and dwell”.

In total, there should be around 125 more seating opportunities, and planters and a “potential artwork mural” are proposed to feature in this area, which will sit before the landing of the lift itself. 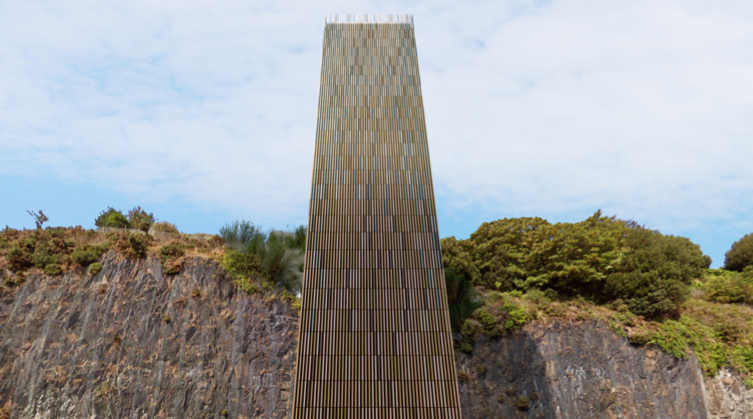 Pictured: The presentation said the lift will be energy efficient.

The presentation also noted that there would be opportunities for coffee carts and food vans in the zone.

More details were also provided about the design of the lift. It described the cladding as inspired by the colour palette of the surrounding rockface. 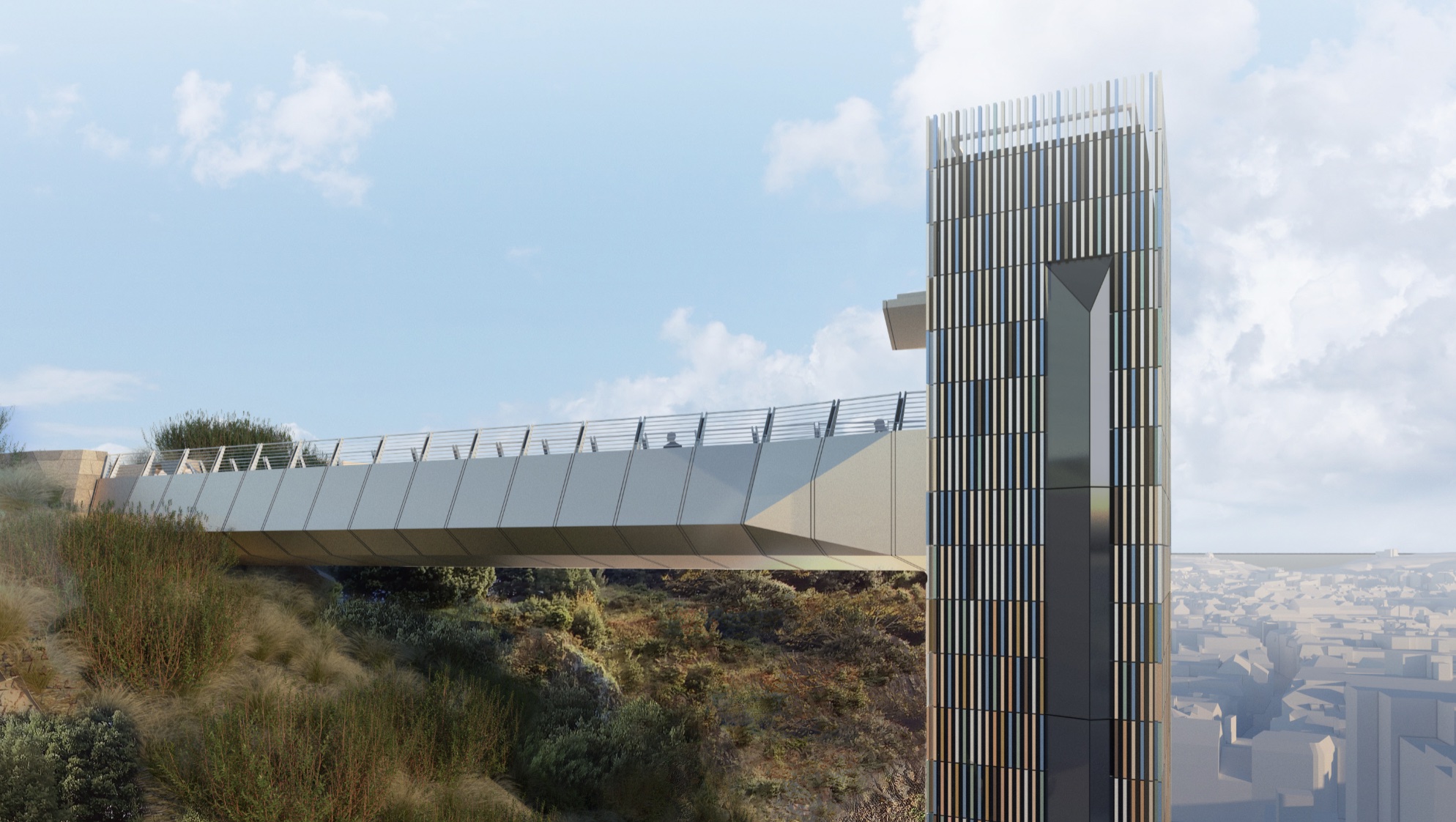 Pictured: A closer look at the bridge.

It was also described as "eco-efficient", with the presentation stating that it would use materials from "best in class manufacturers" and that energy-efficient technologies would be used in operating it.

Posted by nigel pearce on Feb 14th, 2022
Why not build a couple of floors with an escalator access to Fort Regent.
The ground floor could remain as parking and the first floor either parking or office and the second floor as an elevated park with direct access to the fort.
Posted by tonyandrews13 on Feb 14th, 2022
One wonders if there could be a potential link from the pier road car park to the proposed Snowhill lift
Posted by BobJones27 on Feb 14th, 2022
Move the convenient motorbike park to Green st?! Horrible, scabby, dark, inconvenient car park, too far away. Town is gonna be even more dead than it already is. Might as well close all the shops right now. Idiots.
Posted by Private Individual on Feb 14th, 2022
Another hair brain policy is being made on the hoof, where is the costing plan? What is going to be at the fort for anyone to use now they have ripped sport from it.

Why not build a multistorey carpark so people can go shopping then build the escalators at the same time?

Roll on to the next elections.
Posted by Scott Mills on Feb 14th, 2022
Looks like a big stick of Bassett's Licorace allsorts. Why not have a cable car system from the existing steam clock location up to the fort ramparts. What a great view of St.Helier as you travel up.
To place a comment please login Login »