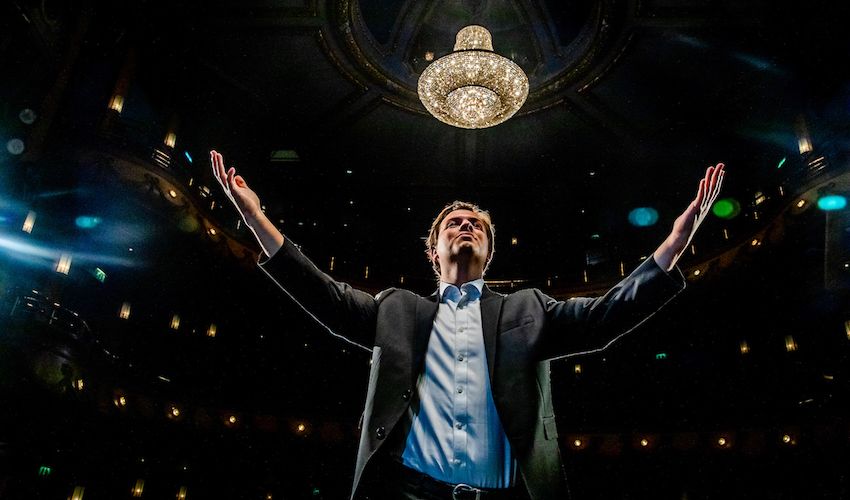 A Jersey-based opera singer has revealed the keys to his success in the industry - from singing in seven languages to staying away from spicy food and mum's cooking.

Express caught up with Miami-born bass-baritone Damien Cayro as he prepares to direct ‘Evita’ for the Jersey Amateur Dramatic Club in July...

If we were to start at the very beginning of Damien’s career, a certain film starring Julie Andrews would be a very good place to start. The characters, story line, music, and songs all contribute to making ‘The Sound of Music’ memorable for many of us.

Pictured: Seeing 'The Sound of Music' prompted Damien to pursue a career as an opera singer.

However, for Damien, the film triggered something that led him to a career in music that would take him far away from his family in Miami to a new life in Europe, a life of precision and performance: a life as an opera singer.

“I was eight when I first saw The Sound of Music,” Damien said. “It just triggered something in me. I become obsessed with the film and kept watching it and singing the songs. At school I joined the choir so that I would be able to sing. I’d walk by myself to school early in the morning for rehearsals, developing my singing and through that, getting selected for better schools with more prestigious music programmes.”

At 16, Damien attended a masterclass hosted by Helen Donath, an American soprano with a five-decade-career who has sung everywhere from The Met to La Scala.

“When she asked me to stay behind after class, I wondered what I’d done wrong. She spoke to me about what I wanted to do in life and suggested I attend La Escuela Superior de Musica Reina Sofia – one of the world’s top opera schools in Madrid. She sorted out sponsorship for me, even covering my flights. The hardest obstacle to overcome was my father – he thought I should get a ‘proper job’ such as becoming a doctor and didn’t understand that opera could even be a career.”

Damien studied in Madrid alongside students nearly twice his age.

“It was quite overwhelming,” he said. “Most people had gone there after a music degree and a masters. We were training all day every day. It was intense but we learned so much. We were taught by some of the best opera singers in the world. I studied under Tom Krause and Teresa Berganza. During that time, we performed for Spanish royalty – the Queen of Spain was a patron – politicians, and lots of people from Spain’s business community.”

This was back in 2013. A year later after the course finished, Damien was back in Miami, living with his parents and supporting the whole family from his earnings as a singing teacher.

“I was earning amazing money for a 19-year-old and would take any concert I was offered. One thing would lead to another. In the beginning I just said ‘yes’ to everything and the most unlikely jobs led to really good opportunities.”

Damien’s journey to Jersey is as romantic as many of the operas he performs. He met his husband, Joe, on a beach in Miami at the age of 20 and moved with him to the UK. When Joe got a job with one of Jersey’s top legal firms four years ago, Damien came with him.

Over the past year he has raised over £40,000 for various Jersey charities through his own work, and as an ambassador for Brighter Futures, he has helped the charity raise six-figure sums.

Pictured: Damien has been working closely with local charities since his time in Jersey.

“The work is so varied. One week this autumn I was performing Hollywood Hits at St. Martin’s Parish Hall, the next week I was singing Diamonds are Forever at a concert for Boodles and Brighter Futures. And a couple of weeks’ later I was doing an intimate opera performance for Brighter Futures’ guests at Government House. I’ve done large garden opera events, private dinner performances and UK corporate entertainment. One event tends to lead to another.”

Opera is a competitive global business, requiring language skills and business acumen. Damien is bilingual in Spanish and English, can speak and sing in Italian, French, and German, and has even performed in Russian and Chinese.

“The stakes are higher because there’s so much competition from everyone all over the world. You can’t just be a good singer in your own language or in one or two other languages, you have to be able to sing perfectly in many languages … and often have to be able to speak the language to a certain standard too in order to get a job."

Jersey isn’t the easiest place for an opera singer to live. Damien travels to Germany for training, goes off-island for performances, and still gets strange looks when he tells people he’s an opera singer.

“I don’t know any professional opera singers in Jersey. The work is in London or Europe, so you must travel. When I tell people I’m an opera singer they ask me if that’s what I really do  - they can’t believe it’s not just a hobby.”

At 25, Damien is in the early stages of a career that usually peaks from 28-50. However, he already feels the effects on his health.

“Acid reflux is common in opera singers,” Damien said. “You can only eat small meals and have to avoid things like chocolate or spicy food. I can’t even eat my mother’s cooking. The singing puts pressure on your diaphragm which causes your stomach to produce acid which destroys your stomach lining. You need to train your body to sing, and a bit like for athletes, this can sometimes damage your health. We can still have a longer career than many footballers, though!”

“Theatre in Jersey is well established and reasonably well-funded,” Damien said. “Amateur dramatic companies can fill performances and cover their costs by selling seats. However, there is no budget for classical or instrumental music, or opera. I’ve tried hard to plan concerts, but you need to import too many musicians as there are not enough local ones here, and the costs are too high.

“There is a shortage of young musicians coming through the schools, and those who do go to train in the UK don’t come back because there are not the jobs for them. It’s a shame because it creates a vicious circle. People need to hear music to know it and to be inspired to learn it. Jersey is so international in Finance with such as strong reputation; however, it’s not replicated at a cultural level.

“Audiences in places like Germany have a really good knowledge of the music – they combine business with culture. Music education should be prioritised in Jersey otherwise a whole generation will miss out on the joy of learning and understanding it.

Pictured: "Music education should be prioritised in Jersey otherwise a whole generation will miss out on the joy of learning and understanding it." (Gary Grimshaw)

“People might think opera is elitist, but I don’t think class comes into it. Opera is about stories and emotion – anyone can appreciate it if they’re given the chance to see a good performance. Music lifted me out of my life and took me to another world.”

In July 2020, Damien will be bringing opera to a larger audience, directing Evita for the Jersey Amateur Dramatic Society. With 600 seats per night at Jersey Opera House to fill, and a run of two weeks, the show is likely to be one of the most widely seen live music events of the year. Set in 1930s-1950s Argentina, Evita charts the rise and demise of Eva Peron and her husband, former President Juan Peron, as they climb to power.

“It’s a very political musical,” Damien said. “It’s all about populism and the power of charismatic leaders, something which is quite timely with Trump and Brexit. The music is by Andrew Lloyd Webber with catchy songs many people will remember from the Madonna film in the late 1990s.

“There are a lot of seats to fill, however, we’ll be using new channels to promote the show – focusing more on social media – and I expect it will be a sell-out.”

Sadly, as a bass-baritone Damien won’t be able to take a role in the show as most male theatrical roles are for tenors.

“Opera can be quite a lonely business; it’s just you and your voice,” Damien said. “However, there are exhilarating moments too. You travel and meet great people. And, at the end of every day, regardless of what you’re singing, wherever you are in the world, you know you’re part of a huge music history that has gone on long before you, and will no doubt go on long after you.”

This article first appeared in Connect magazine. Click here to read it in full.