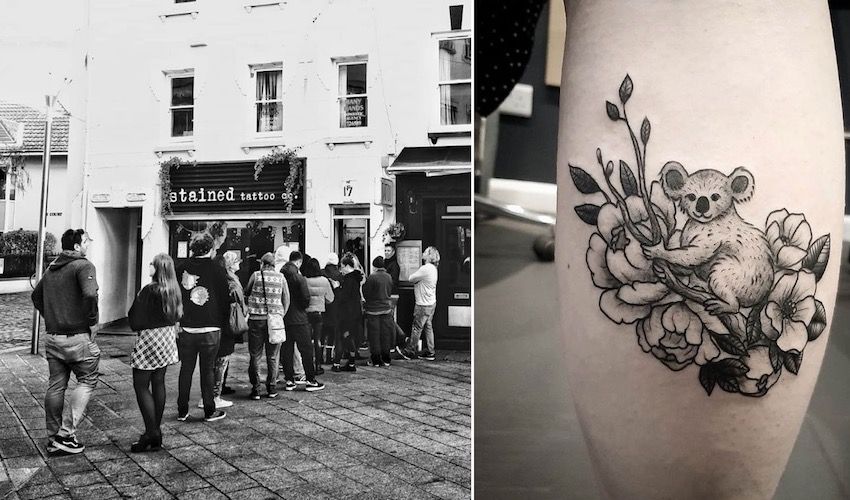 A local parlour has raised thousands for the bush fire relief effort in Australia after hosting a flash fundraiser offering tattoos in exchange for donations.

That sum will be split between the Australian Red Cross, NSW Fire and Rescue Service and WIRES – charities that are all doing their bit to help communities and wildlife affected by the blaze.

The fundraising event on 12 January saw customers queuing up outside the parlour doors to get their own Australia-themed tattoo for a £10 minimum donation to charity.

It comes after Australian bush fires got out of control at the end of last year, spreading rapidly, and threatening natural habitats, people’s homes and many lives.

Stained tattoo artists Travis Cracknell and Ben Pearce were inking back-to-back until late to meet the demand for the charity tats.

Posting on Facebook about the achievement, Stained wrote: “Thank you all for being so generous, both to those who came to get tattooed on our Charity Flash Day and to those who came to book the Australian flash designs after the event. Also a big thank you to all of you who popped into the studio to make a donation in the charity bucket.”

The event was also special for another reason, with Stained's founder, Fliquet Renouf, also able to stop by for the event.

The talented tattooist and mum-of-one had been out of action since late last year after a shock diagnosis of an aggressive late-stage cancer, prompting friends to set up a JustGiving page that has now raised over £32,000.

Pictured: Money has been raised to support Stained tattoo artist Fliquet Renouf as she battles cancer.

Since then, she has been receiving treatment in the UK, but was fortunately well enough to visit Jersey and stop by the fundraiser, where she says she received an outpouring of love.

"It was so good to do a couple of days work at @stainedtattooco and to make it for the flash day!" Fliquet wrote in an update on Instagram.

"Thanks to everyone who came to say hi and hang out, and huge love for the pressies too. I swear I have the best clients ever, you're all awesome and I miss tattooing y'all so bad!"

IN PICTURES: Some of the Oz-tastic charity tats…